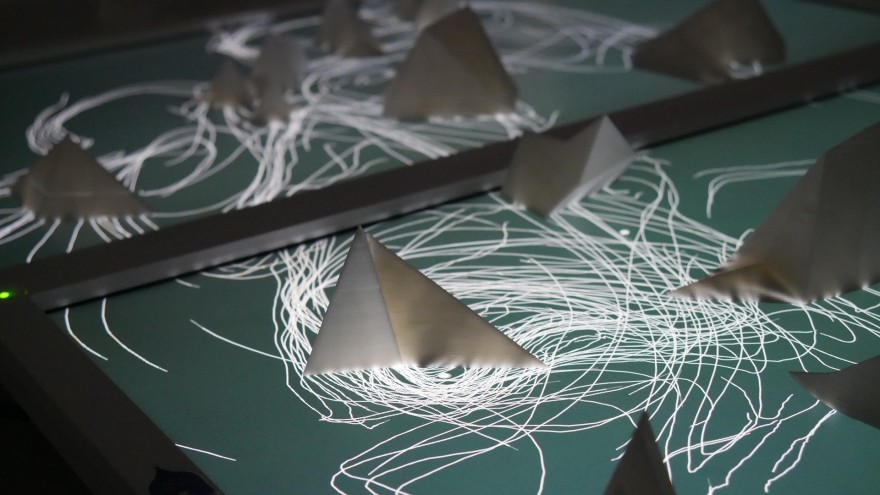 Off the Western coast of Scotland, the Hebrides are a set of islands somewhat removed from the mainland. Scottish Gaelic is most prevalent there, but the furthest island out appears to be named for a non-existent saint, while some get their names from Norse or even pre-Celtic languages. 1973 horror film The Wicker Man is set on a fictional island among the Hebrides, and so is The Chinese Room’s Dear Esther (2012). There’s a misty sense of uncertainty brought on by the distance between the far-flung islands, and by the fact that travel from one island to another has historically been dangerous.

the “piece starts to resemble a game”

The networks established by the locals on these islands, especially one of steamboats in the late 19th century, allowed for the development of robust inter-island communication and exchange, and are the inspiration for Simon Sloan’s new project Logistic. Logistic is presented as several 3D-printed islands on a set of monitors spread out like a map table. Boats, represented by lines, move across the screens from one island to the next. Sloane says that when a visitor moves the islands around and watches boats change their paths and interact according to his 32 rules, the “piece starts to resemble a game, the goal however is somewhat unknown. The rules are hidden.”

While active, Logistic produces a map not of places and spaces, but of relationships. In this case, economic relationships are represented through the transmission of “resources.” But the second characteristic of islands, “potential,” acts a kind of social capital, or importance: when a boat has no resources left it is converted into potential for the island it stops at, attracting more boats. Rule 21 dictates that “a boat will follow where previous boats have been,” but the higher the Potential and Resource values of an island, the faster those values start to decrease—the networks drawn out across the table will inevitably shift and decay.

One of Sloane’s earlier projects, Visible Networks, touches on some of the same ideas, but the way Logistic forces a viewer to think about prominence of paths shifting over time blurs the line between Earth-bound networks and digital ones in a novel way. Of course, like the systems in Logistic, the networks we interact on today are also bound to ebb and flow over time, as new paths gain influence and old ones are left behind to decay and disappear.

You can find Logistic, and several more of Sloane’s digital artworks on his website.