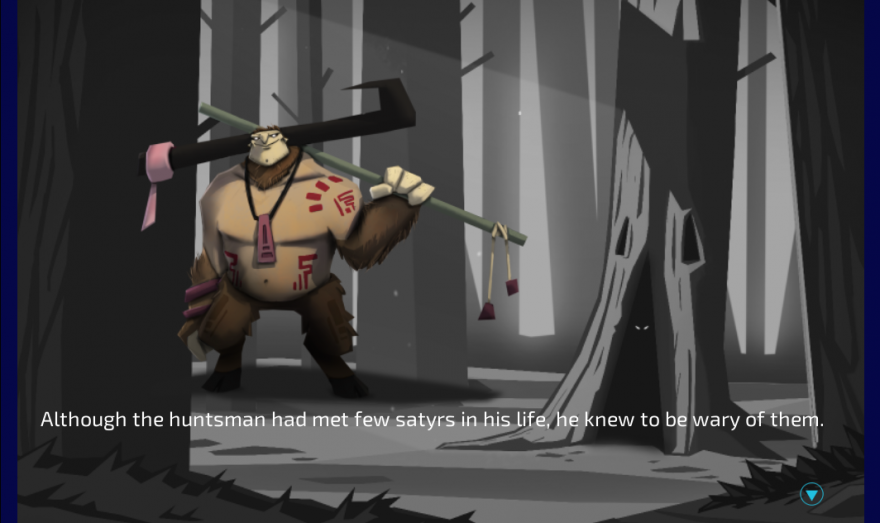 Fairytales, for all their other virtues, tend to be pretty easy games to hack. All you have to do before you get started on your journey/quest/trek is ensure you’ve memorized the Three Essential Pro-tips for Surviving a Fairytale:

Unfortunately, most fairytale characters don’t own a copy of the Three Essential Pro-tips for Surviving a Fairytale. So, fairytale plots often go down like horror movie plots do: predictably horrible for almost everyone involved, and with you yelling at them for being such idiots all the time. Mistakes must be made in order for the audience to learn the moral embedded in the narrative. And that inevitability takes a lot away from the choices characters make—because, of course they made the wrong decision again. The story demanded it.

But an interactive, choice-based story like The Hollow changes the narrative limitations of the fairytale altogether. For one thing, the binary good versus evil morality of most fairytales translates seamlessly into system-based videogame narratives (just ask Journey, and Fable, and The Unfinished Swan). For another, interactivity allows the storyteller to show both sides of the moral consequence. By combining fairytales with choice-based videogames, The Hollow effectively pins classic tropes against a player’s moral impulses.

In The Hollow, you play as a widower huntsman, who never fully recovered from the tragedy of his wife’s death. When your daughter vanishes into a foreboding and enchanted forest, it’s up to you to save what’s left of your once happy family. There are two endings to this fairytale: a good one and a bad one, and your choices determine which you get. Usually, at this point, I’m the type of player who makes damn well sure she gets the good ending. In fact, it took me twice as long to finish Dishonored because even though I’m absolute garbage at being stealthy, I’d be damned if I got subjected to anything but the “right” ending.

Yet, despite my nearly compulsive goody-two-shoes behavior in games and my total awareness of the Three Essential Pro-tips for Surviving a Fairytale, I somehow failed in my first playthrough of The Hollow. Take it as a compliment to writer Tom-Olivier Martin and artist David Fortin, but I found myself genuinely seduced into doing bad things again and again. Trained by many past videogame experiences to act defensively and keep my weapons at all costs, I approached each choice in The Hollow with a pragmatic callousness. Whether I morally justified my actions by claiming it was done to save my daughter, or simply did not want to feel more vulnerable in a forest full of tricksters, I cheated and murdered my way to my end goal and never looked back.

After years of yelling at fairytale characters for making dumb mistakes, I found myself making the very same ones. So before you judge Little Red Riding Hood for not listening to her parents or Jack for stealing a giant’s prized possession, play The Hollow first. Because after realizing you’d commit the very same fatal errors, you start to see the problem as less to do with dumb people, and more to do with human nature.

You can play The Hollow on your browser for free.

Update: Apparently there are four different endings total, with varying moral implications. Can you discover all the ways you can fail miserably?!