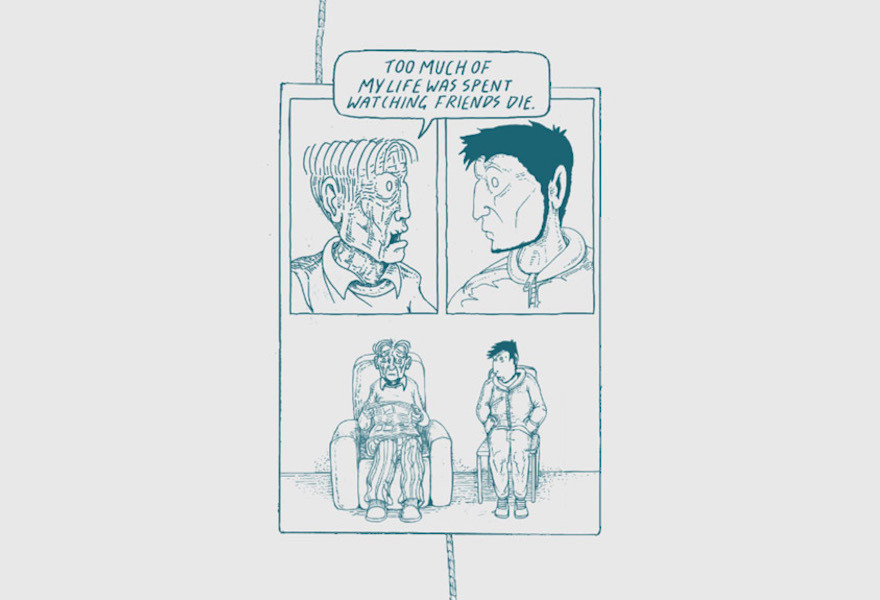 Towards the end of his life, my grandfather began carrying a notebook wherever he went, writing down every minute detail of his day as best he could. He wasn’t working on a memoir or gathering ideas for a novel, but simply trying to keep track of his memories. At this point, he was years-deep into a battle with Alzheimer’s, and the notebook was his attempt to maintain some semblance of dignity, preparing himself for the five or so minutes later when he will have forgotten whatever it was he had written down. It was a valiant effort, but to our disappointment, it didn’t work.

In these moments, I always saw my grandfather’s thought process from the outside. But while reading These Memories Won’t Last, an animated web comic written and drawn by artist Stuart Campbell during his time at Vienna’s Air 15 artist residency, I got a peek at what it might have been like from his perspective. The comic tells the story of Campbell’s grandfather as he struggles with dementia, but as users scroll down the page, old panels begin to disappear and rereading them becomes difficult, mirroring the disease.

With dementia, there is no getting better

In the comic, Campbell talks about spending his youth listening to his grandfather’s childhood memories and old war stories, before tearfully recounting how those stories have begun to fade as his grandfather’s condition has continued to develop. He discusses moments when his grandfather became absorbed by paranoia, and times when his grandfather addressed him by his cousin’s name. These are all experiences I can attest to as well. Nowadays, Campbell’s grandfather still occasionally has brief moments of lucidity, but they are often sad affairs, where he reflects on what he’s lost and what he’s lived for. With dementia, there is no getting better. Just hoping that your children have a better future.

Today, I am the last remaining member of my mom’s side of the family, with my mom having passed away from heart disease a few years after my grandfather lost his battle with Alzheimer’s. The doctors tell me it was a lack of oxygen going to her brain, but in her last few weeks, I began to see behavior from her that mirrored my grandfather’s. One of the nastier sides of Alzheimer’s is that it is hereditary, and while it is not guaranteed that someone who has a family history of the disease will develop it, they are at a higher risk for it. I have no idea if I will get Alzheimer’s one day. I don’t particularly care to find out. I only hope that if I do, someone will be around to tell my story, just as Campbell told his grandfather’s.