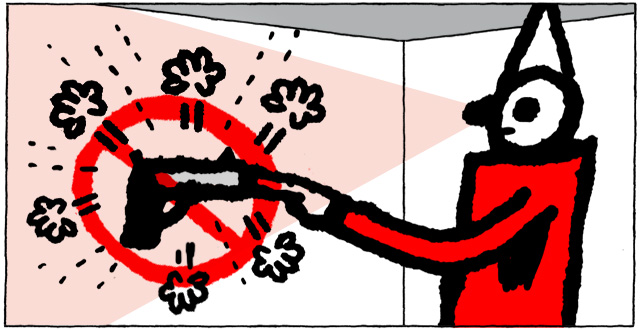 This is part three of a four-part series. Read part one, part two and part four.

I started killing at age five. My first victim was a waddling, bug-eyed mushroom, minding his own business on a little stone street on a nice clear day. I stamped him to death. Then I laughed. Thus began a career in bloodletting, a full 21 years of remorseless murder, which has spanned history as well as prehistory, crossed species, bridged dimensions, and gone entirely unpunished. I have shot, stabbed, sawed, strangled, burned, impaled, disemboweled, decapitated, defenestrated. I have munched Cheetos while doing so, chatted on the phone, showed my friends, showed my parents. In fact, I just killed somebody yesterday. I think he was a blood mage, but I could be wrong. At my age, they tend to run together.

A list of my notable victims includes (but is of course not limited to) zombies, dinosaurs, orcs, Jedi, African villagers, Arab bystanders, Ares, Alex Trevelyan, marines, space marines, some guy named Ganon who just won’t quit, headcrabs, and Hitler in his finest robot suit. I think I’m guilty of genocide against Metroids. Once I hijacked an SUV near Central Park, ran over the driver, drove up Broadway to Columbia University, running over several more people on the way, strolled to the center of campus, pulled a rocket launcher out of my jeans pocket, and staged the most memorable campus protest since 1968. The weird thing is, just a few months later, they gave me a master’s degree!

You could say that in the popular violence-in-videogames debate, my position is enthusiasm. The alarmist cant, “violent videogames make violent people,” makes no sense to me; like any other halfway literate gamer, I’m familiar with a whole host of psychosocial/behavioral hypotheses that are just as likely. For example: Videogames may be an outlet for aggression. Videogames don’t make people violent, but violent people may seek out violent videogames. I find these arguments useful when debating the elderly and idiots, but I am neither convinced nor unconvinced by them.

What I am convinced by is my own experience. I have been in one fight, and that was in the fourth grade. I have no violent urges. My friends who play videogames are no more or less aggressive than those who do not. The staff of GamesRadar, who spend every day around videogames and videogame culture, were uniformly considerate, funny, and good-natured. I never saw anything wrong with violent videogames because I never saw anything wrong with the people who played them.

So I saw nothing wrong in October 2007, when as a part of my internship at GamesRadar, I was asked to preview Soldier of Fortune: Payback, the third in an infamous series that began in 2000. The first game ranked No. 8 on PC Magazine‘s list of the all-time most violent games and featured

disembowelments and limbs that can be blown clear off torsos … Soldier of Fortune was so violent that the game was placed on Germany’s Federal Department for Media Harmful to Young Persons index.

The two Activision representatives who came bearing the preview were in their early thirties and talkative. I remember being surprised at how funny and down-to-earth these guys seemed, compared to the other flacks I’d met. We crowded into a small room, they loaded up the preview, and then they started to talk to me about the research that had gone into Payback.

The developers, I was told, had extensively studied real-life video from Afghanistan and Iraq. 2007, you’ll remember, was the year of the troop surge in Iraq, and the year of the highest number of coalition troop deaths there. The videos, one rep told me, gave crucial insight into the ways that the human body comes apart when struck by various types of ordnance.

His tone was still chatty, down-to-earth. I got a weird feeling in my chest, sort of an anxious skittering, and kept nodding my head—yes, yes, go on. The other rep started to play the preview level. It was a taupe, dusty city, obviously a stand-in for Baghdad or Fallujah or Ramadi. Behind a mercenary’s machine gun, we moved from street to street, pumping bullets into the turbaned men who jumped out of windows and trucks screaming curses in Arabic. The enemies in Payback simply break up with every bullet. Blood sprays. Bones protrude. Arms and heads and legs detach. Every now and then, a particularly skillful shot from the rep playing would prompt his partner, sitting next to me, to mutter, “got him.” 2007, you’ll also remember, was the year that the Iraqi government revoked Blackwater’s license to operate.

After ten minutes of playing, the guy with the controller paused the game and asked if I wanted a turn. My heart was beating hard and I really wanted to leave the room. “No,” I said. The reps looked at each other. “Are you sure?” the other one asked. “Yes,” I said. It was quiet for a minute, and then someone clapped me on the shoulder. “High standards for an intern! Give me a go.” S., the editorial director of the site, took the controller from the rep and sat down. I hadn’t noticed him enter. S. started blasting insurgents and I sank into my chair. At the end of the demonstration, I slunk out of the room, feeling exhausted and confused.

My adult enjoyment of violent videogames was always girded by two assumptions. The first is that eliminating or surpassing an obstacle is the basic unit of videogame play. The second is that in popular videogames, these obstacles are almost always representations of living things. Combining these two statements yields the idea that eliminating living things—killing—has been, is, and will be a genetic feature of videogames. If you accept this, you can accept that the pleasures of killing in videogames are formal and iterative rather than sick and twisted. In other words, the fun of many games comes from two things: first, how good or novel or satisfying the killing is relative to all other videogames; and second, how fun or satisfying it is to get better at killing through repetition relative to all other videogames.

This line of reasoning had carried me through some pretty brutal games. Now it felt less like an argument than a weak justification; or worse, a highfalutin excuse. No matter how good or novel or satisfying the killing was in Payback, my new knowledge made the game abhorrent, unplayable. I tried to write my ambivalence into the preview, but I think I just made the game sound fun.

I would like to say that this experience taught me a lesson—that Soldier of Fortune: Payback made me realize that there are some games we shouldn’t play, simply because they are wrong. I do try to avoid military shooters now. But if I’m honest with myself, and you, the lesson the game taught me was not the right one. I now avoid reading anything about most violent games except their review scores—to determine if I should buy them. I now have the same attitude toward a violent videogame that I have toward steak. I do not want to know how it was made. I do not want to know how they made the killing fun.

This is the third of a four-part series of Joseph Bernstein’s experiences as a videogame website intern. Read part one, part two and part four.