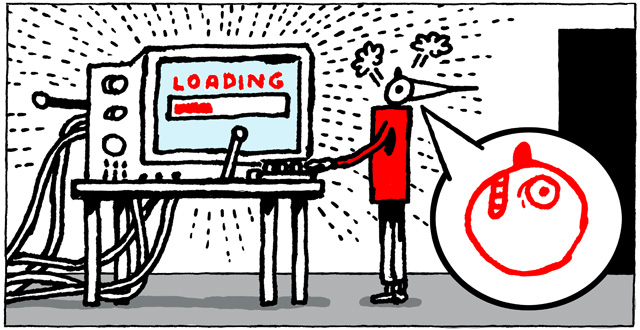 This is part two of a four-part series. Read part one,  part three and part four.

The offices of Future US, which owns GamesRadar, sit south of San Francisco proper and north of the airport, on a little half-mile-wide lump of land east of the 101 and west of the bay. This particular spit has the romantic name of Sierra Point and is technically part of South San Francisco, but no one lives on it; other than Future, the only other buildings are a few airport hotels, some offices, and a yacht club.

Two months out of a Midwestern university, driving down palm-lined Shoreline Court on a warm late September day with the water to my left and my windows down, I was feeling pretty good. After a month of scouring Craigslist for writing work in the city, I had an interview with, of all places, a videogame website. I was excited. Not only was I an avid gamer, but this position had the potential to satisfy both of the nebulous upper-middle-class imperatives wrapped around my ambitions: Do what you love! Write what you know!

The interview felt like a validation of my jobless, planless move to San Francisco. My friends seeking work with tech, financial, and consulting companies had been scaring themselves stupid over case interviews for months, agonizing over the firmness of their handshakes and debating the symmetry of their tie dimples. Meanwhile, my interview at GamesRadar consisted of chatting about videogames for forty-five minutes with a funny editor, C., who actually apologized to me for being nervous. She said she was impressed by my resume, and asked if I wanted to start the next day. I said yes. Only after I drove home and told my girlfriend did I realize that I had no idea what I would be doing.

The answer, I found out the next day, was production. For the uninitiated, “production” is webspeak for data entry. It refers to the process by which someone feeds many kinds of information from various locations into the existing structure of a navigable website. The software that enables this to happen is called a content management system (CMS), and if you have never used one, you have been a very lucky person indeed. At the core of the CMS experience is the ability to build or modify web pages, usually through a series of pulldown menus and text and media inputs; but it is never easy and it is never intuitive.

I will spare you a catalogue of CMS frustrations, but I will tell you about the waiting. The combination of GamesRadar’s byzantine CMS and doddering server turned the publishing of every page into an exercise in exasperation. Pages heavy with video could take ten minutes to appear on the site, and every time I wished to make a change to the page, I had to wait the ten minutes again. In addition, every time we built a new page at GamesRadar, we had to first put it through “preview mode,” a private version of the real page, visible only to GamesRadar staff. This practice applied to copyediting and proofreading, important pursuits both, but it effectively doubled the time we spent waiting for pages to appear on the website. This was the kind of waiting—too long to do nothing, and too short to do anything—that turns people into foot jigglers, teeth grinders, knuckle crackers, nail biters.

Every morning a list of content slated for publication appeared on the server in a little text file, and it was C.’s job to make sure that all of these articles ended up on the website. After she divided tasks among the interns and another production editor, we would all fall into the weird silent toil, punctuated by strangled guffaws, that anyone who has worked at a website has experienced. The silent toil: Imagine, after spending an hour finding the necessary information pertaining to the relevant game, after making the necessary image edits in Photoshop, after adding the necessary HTML to the text, after making the necessary corrections in preview mode; imagine realizing that you’ve forgotten to remove the article in question from the public to-do list, and that someone else has been doing the same thing as you for the previous hour.

This was the kind of waiting—too long to do nothing, and too short to do anything—that turns people into foot jigglers, teeth grinders, knuckle crackers, nail biters.

Now, imagine repeating this process ten times a day, with games like Konami Kids Playground, and being unable to scream. Early in my time at GamesRadar, someone told me that, for whatever reason, C. could be a crank, and not to take it personally. Maybe, I thought, this was because she spent nine hours a day wrestling with an unresponsive, unintuitive, unattractive data-entry system complicated by a list of special exceptions so long as to mock the very idea of rules. Or maybe not. For whatever reason.

If you think of the giant videogame websites—IGN, GameSpot, GamesRadar, 1UP, etc.—as archives of information housing miles of text, years of video, and millions of images, you start to get a sense of the astounding amount of time humans have spent flagellating their souls in a CMS. Then it starts to make sense why, maybe, previewing MX vs. ATV: Untamed might represent a welcome break—a reward, even. Why spending half an hour with six grinning flacks might not be such a bad time, if you consider the alternative. And why your brain might just feel sufficiently traumatized to go ahead and trust one of these flacks when he swears up and down that just as much time was spent on the Nintendo Wii version of the game as the Xbox 360 version, that it isn’t just a port of the forthcoming PlayStation 2 game gussied up with token motion controls.

Maybe you want to do this just so you can spend half an hour uploading something to the archive that has your name on it, even if you aren’t very proud of what you’ve done. Maybe this impulse is a sad, distant cousin to the reason construction workers sometimes carve their initials into wooden beams.

During our interview, C. had confused me by saying that she didn’t play that many games at home. As I pulled out of the Future parking lot onto Shoreline Drive after my first day at GamesRadar, I was no longer confused.

This is the second of a four-part series of Joseph Bernstein’s experiences as a videogame website intern. Read part one, part three and part four.