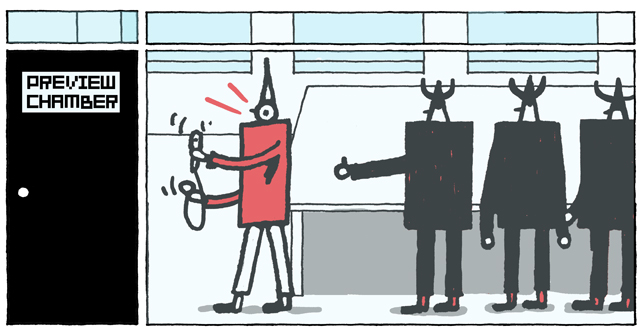 Publishers release 1,000 videogames every year, nearly three a day, and you are free to ignore all but the best five of them.

One of the 995 games that you ignored in 2008 was MX vs. ATV: Untamed. In October of 2007, I was doing just this—ignoring MX vs. ATV: Untamed—when I was told by the executive editor of the website GamesRadar, where I was in my second day as an intern, that a team from the publisher THQ had arrived at the office and I would be previewing a racing game for the Nintendo Wii.

The editor, a friendly man who owned a pet pig, hustled me down a carpeted hallway into a conference room, where we were met by six professionals in NorCal dudewear. “Be nice to him,” my editor said, and disappeared. I went around the room shaking hands, and caught a few people by surprise, because one or two guys, and of course they were all guys, seemed to have forgotten their titles. I sat down and realized that I had been seized from my desk with such pace that I had totally forgotten to bring along a pen.

“I don’t have a pen,” I said, which elicited some who-the-fuck-cares looks from the assembled. But the gentleman sitting to my right produced a half-pencil, the single-use kind found at miniature-golf courses, and handed it to me.

I’m not sure if you have ever seen a group of grown men get professionally excited. I certainly hadn’t. Each man in the room took a turn demonstrating the game on the flat-screen, and each man did so with staggering gusto.

The social protocol goes like this. By yourself, you can’t respond to the collective enthusiasm of a group of unfamiliar people with anything less than approval; otherwise you’re an ungrateful, petulant asshole. Taking advantage of this rule is bullying, it’s cynical, and it works. I started saying things I didn’t mean: “cool” when I meant “stop,” and “awe-some” when I meant “please stop.” I held the Wii Remote sideways, like handlebars. And as I fiddled with the unresponsive, un-fun Ski Jump, I said, “sweet.” I said that. However good or bad MX vs. ATV: Untamed was—and it was obviously terrible, a grainy Wii port of a mediocre PlayStation 2 game, with Ski Jump being a lazy swipe at motion controls—was irrelevant. So powerful and desperate was the enthusiasm in the room that I felt like a parent being asked to evaluate his children’s lemonade stand.

At the end of the twenty-minute presentation, the man who was in charge—or at least, who talked the most—held out a large, glossy folder emblazoned with the THQ logo. “Everything you need is in here,” he said.

At my desk, I opened the folder to find several impressively thick pieces of paper on which were printed the particulars of the game. I looked at my notepad. I had made two bullet points with the bowling-alley pencil.

I knew nothing about racing games, having loved only Mario Kart 64. I knew nothing about motocross, less about ATVs, and was at a loss to explain how they would become untamed or under what circumstances they would want to fight each other. But here were meaty paragraphs full of information about features and modes and tricks and graphics and multiplayer capabilities. Here was my preview. All I needed to do was add transitions, and barely even that. I mean, who reads GamesRadar for the transitions?

I opened a new Word document, but then I had a nagging thought. Certainly the person at THQ who had authored this information knew more about the game than I did. By extension, this person also knew more about ATVs, motocross, the history of ATV and motocross games, THQ, the game’s developer (Incinerator), the Wii, and the videogame industry in general. I realized that only one thing differentiated me from the author, who was obviously far better suited to write the preview. I was unaffiliated with THQ. My qualification was the ability to publish information about MX vs. ATV: Untamed without a THQ watermark. So then I had an even worse thought: I was not the author of the piece I was about to write.

I wished, then, that I could go back to ignoring MX vs. ATV: Untamed. But I had a deadline. It was only my second day as an intern at the third-most popular videogame website on the Internet, and I was already learning.

This is the first of a four-part series of Joseph Bernstein’s experiences as a videogame website intern. Read part two, part three and part four.