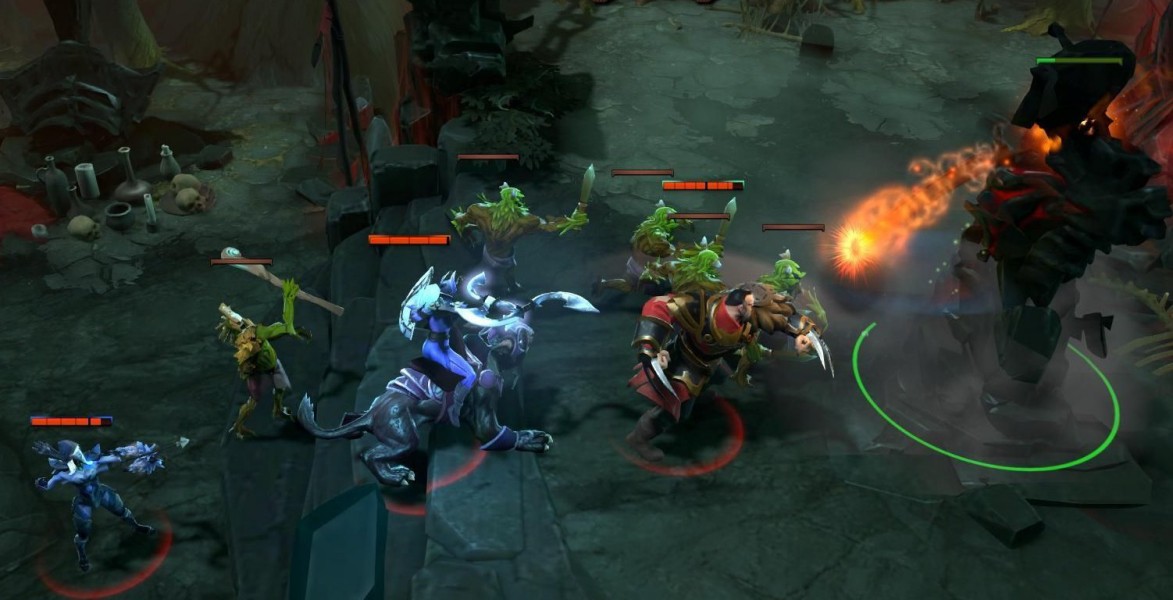 There is one thing fans of professional basketball have been clamoring for more than any other: to see LeBron James dunk in the slam dunk contest.

Although the NBA’s most gifted player is beyond capable of delivering mesmerizing windmills and tomahawk jams, these wishes have gone unfulfilled, with James insisting that he can’t razzle-dazzle if the slam doesn’t come impromptu, as if it was divine inspiration. The frustration came to a head last year when one desperate fan started a crowdfunding campaign to raise a million dollars, with the goal of enticing James to join the annual celebration of dunking. When the wind quickly went from the fundraiser’s sails, the world suffered through another star-less slam dunk contest. However, the idea of the Internet using its collective bargaining power to make sports more awesome isn’t as farfetched as you think.

So far, the most eye-opening example of crowdfunding for competitive sports has come from Dota 2, the role-playing, warlock-bludgeoning esport. Earlier this year, players raised an unprecedented $10.9 million to award the finalists at the International Championships, a mega-event held each year in Seattle where the game’s elite square off. This was far and away the biggest purse in competitive gaming history, but it also topped the cash sum of many time-honored institution’s tourneys in the process. The sum surpassed the prize money of The Masters, one of golf’s biggest stages, by a cool million. Newbee, the Chinese team who took home the gold in Dota, pocketed over $5 million, which is $3 million more than a jockey would receive for winning a Triple Crown—and that hasn’t been done since 1978. The numbers alone make the case that professional sports could learn a thing or two about crowd-cash from Dota.

The wider world of sports occasionally passes the offering plate to fans, but nothing close to this magnitude. Crowdfunding campaigns are usually reserved for lowbrow alternative sports, like roller derby and quidditch, the real-life sport based on the Harry Potter books. But the business model has on occasion infiltrated the pros. In April, for instance, charitable users of Dogecoin donated over $55 thousand to sponsor NASCAR driver Josh Wise, who raced at Talladega in a car decked out with the cryptocurrency’s golden Shiba Inu insignia.

Game studios have plenty of room to experiment with new ways of making money.

The secret to the International’s enormous financial success is something known as the Compendium, which was basically Dota’s digital equivalent to the guides hawked outside of football stadiums. Valve sold these companion apps for $10 a pop, with 25 percent of the revenue going into the prize pool. It was an unprecedented idea for games. The economist Edward Castronova says that game studios have plenty of room to experiment with new ways of making money, comparing the business models of games today to the state of the film industry in the ‘20s. “You’ve just discovered sound, and someone comes and says, ‘You have no idea. Eventually, there’s going to be color and huge graphic effects!’” he says. “And the people in the industry are like, ‘Yeah we’ll get to that. But we’re making a lot of money with this right now.’”

The International’s pool gradually expanded into a Scrooge McDuck-sized money vault, $2.50 at a time. The Compendium was a hot ticket because Dota 2 is a hot ticket, but also because it was smartly incentivized with digital rewards. And what were these coveted stretch goals they handed out? They included exclusive emoticons, rainy weather effects for levels, and a fat, elderly cherub skin for your in-game courier—in other words, complete fan service. This kind of economy—let’s call it horde-financing—can be thought of as wide-scale negation power for fans. And it works because, since the Internet came around, “more and more people are establishing their consumption patterns around information” and are willing to spend money on non-physical things, Castronova says.

Part of me can’t help thinking how awesome horde-financing would be if applied to other sporting arenas. For instance, what if the NFL decided they were going to throw a crowdfunding campaign to finance the Pro Bowl? The event is usually a snore because the season is already over, so the players don’t care, and the fans in turn don’t care because the players aren’t trying. But if there was, say, an $11 million pot for the victors to split, I’d imagine we’d get a game out of it. Of course, these are stars who don’t need more money, but the real benefit is that it would let fans make fun, important contributions. If they raised two million, get rid of those garish red-or-blue spangled jerseys. If they raised 6 million, have Marshawn Lynch run the halfback option and throw a long one to Drew Brees.

This might not be the most eloquent solution, but there are many possibilities for the International’s business plan. As Valve’s bossman Gabe Newell has said about their digital economies, “the sets of lessons we’re learning today in the videogame space are probably going to be true of a much wider range of industries tomorrow.” And hopefully that will include the sports industry, so we can finally see LeBron dunking on All-Star Weekend.