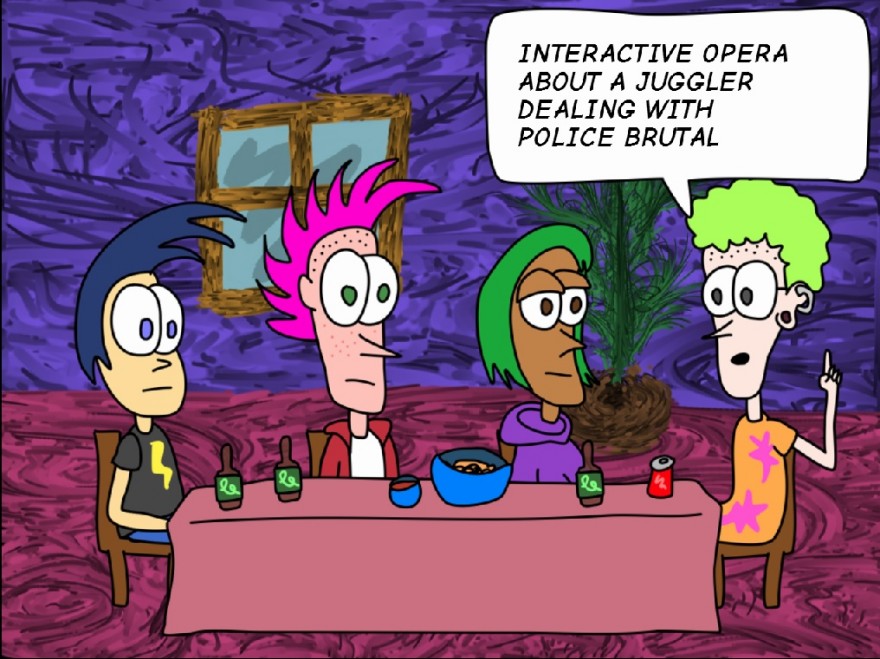 In presenting the game Interruption Junction, Deirdra Kiai asks a question: “Do you ever feel like if you don’t speak up—and speak up often—you’ll literally disappear?”

My reaction to this was along the lines of “Oh my, like, all the time!” As an awkward, wholly unremarkable human child, I always found myself staring into space while people shot sentences at each other, all around me. I said nothing; was nothing. It’s far from being as tragic as that may sound, believe me—I had years in service as that weird quiet kid, I had that locked down in cruise control. Turns out I was queer and didn’t know it for years; now I shine™. Well, I give it a go (the lack of self-confidence never went away).

being part of the conversation is exhausting you

Anyway, Interruption Junction is a one-button game about being that person during a casual conversation around a table, presumably among friends. According to Kiai, it’s “about being lonely in a group of people,” or as I would put it, being comfortably mute while people talk nonsense around you. And they really do talk nonsense in Interruption Junction. Speech in the game comes in both text and sound: the text consists of sentences that only a computer could invent, while the sounds are literally someone going “blahblahblahblah.”

The stinger, at least for all of us introverts, is that you have to try to speak up during the conversation. Otherwise, as Kiai signposted in that previous question, you will literally disappear, ending the game. And so, you interject your peers’ enthralling discussion by tapping the Space bar or clicking the left mouse button. But, not just that, you have to repeat this action to keep talking, as if it were a pulse. It gives your sentences a stamina, as if being part of the conversation is exhausting you, and yeah, that’s entirely the point.

There’s more to this as well. “Do you ever feel like if you do speak up, everything you have to say is trivial and pointless and no one cares?” Kiai also asks. Reflecting this, when you do speak up, you start with awkward stutters and speech breaks—”um,” “uh,” and “so.” If you keep speaking, you’ll get into a flow, but soon you’ll start to talk without taking breaths. I’m also familiar with this outcome: being so nervous about suddenly having all the attention on you that words roll into a mindless burble.

Seconds later, while you’re still desperately trying to keep your listeners engaged in your audible brain-sick, your friends start to disappear. Before you know it, you’re alone again, babbling only to yourself. You spoke too much, bored them, and now they’re gone; your worst fears realized. Then the game ends the same way it did when you said nothing at all.

Hence, you learn that Interruption Junction wants us to find that tricky balance between not talking enough and talking too much. Some people, the more sociable people, may not be aware of how some of us turn conversation into a mathematical equation—timing pauses between sentences, judging every facial expression. Well, this is a game that neatly demonstrates this concept we’ve internalized, while also somehow managing to be an effective tragicomedy.

You can play Interruption Junction for free in your browser.