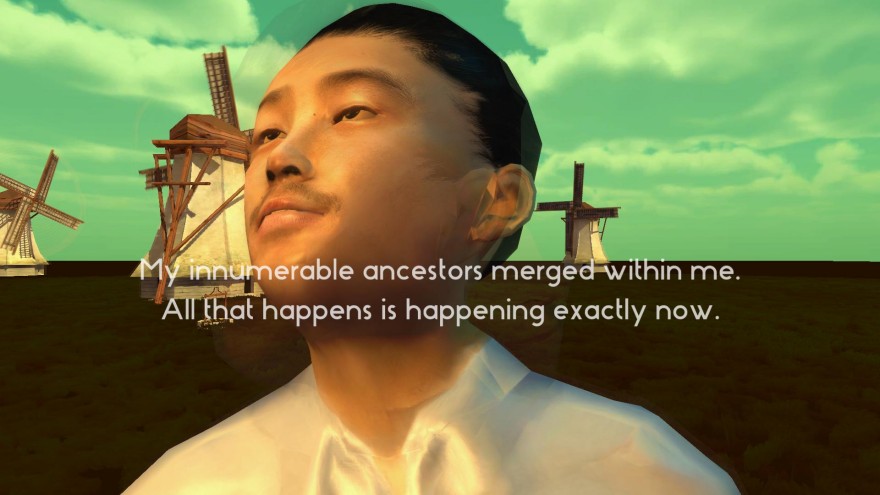 Robert Yang hopes that players of his latest game called Intimate, Infinite can be “patient” with its experimental nature. He made it across three months for makega.me’s “Series” pageant, and is a multiple adaptation of Jorge Luis Borges’s short story, The Garden of Forking Paths.

As with other adaptations made for the pageant—The Statement of Randolph Carter and The Yellow Wallpaper—it’s best that you are familiar with the story the game is based on before playing it. It’ll make more sense then, as Intimate, Infinite isn’t a direct retelling of the story but adopts a non-linear narrative to explore its themes of simultaneous (alternative) and infinite realities.

playing with permutation and the many colliding possibilities of the present.

That said, Yang has also taken events directly from the story and recreated them in the game. The “solitary road” that Doctor Yu Tsun walks down in the story, where the “full moon seemed to accompany [him],” is one of these. It’s the main feature in one of the three short first-person games that you enter by clicking on a book in Doctor Albert’s study. Yang describes the basic differences between them: “Road is about a linear thing, Hedge is a puzzle thing, Chess is a toy thing.”

Hedge takes place at a garden inside a ruined abbey where you can grow a hedge maze to direct Tsun—the puzzle involves reaching the other side where a key lies in wait. In the process of reaching a solution, you’ll undoubtedly draw many different paths for Tsun with the hedges. This has you explore the “Forking Path” theme in a metaphorical form of play that also doubles up as an actual puzzle.

The chess game is taken from a question posed in Borges’s story: “In a riddle whose answer is chess, what is the only prohibited word?” You’re Tsun and sit across a table from Doctor Albert while seemingly midway through a game of chess. It’s up to you how to interpret the game logic here, as you can attempt to play chess as traditional rules demand if you wish, but you may notice that arbitrary play can be had here too, as any piece—no matter whether it’s black or white—can take all of the other pieces out, negating any firm rules. There’s a small puzzle to solve here, but again, it’s more about playing with permutation and the many colliding possibilities of the present.

After you’ve revisited these three games, affecting subtle changes between them, and eventually “solved” two of them (I’m trying not to spoil the entire thing here), you’ll find a way to interact in a new way with the third one. It’s at this point that the three games, like all of Tsun’s ancestors and alternative selves, merge together as one in time and space. Various settings that Tsun dreams of and has visited bleed together during this chaotic ending sequence which ends up being faithful to Borges’s story.

What Intimate, Infinite explores through the framework of The Garden of Forking Paths is how videogames allow us to experiment with alternative narratives and the infinite. Save states are good examples of this, as they allow us to load up a previous point in a narrative and explore its other possibilities. Likewise, checkpoints let us change the future by rewinding time and retrying to overcome what previously killed us.

Intimate, Infinite also goes far beyond speaking about videogames, and just like the riddles and textual puzzles that Borges employs, it introduces philosophical concepts such as modal logic, time paradoxes, and the ontology of possibility. It’s an enigmatic text that has us think outside of our own linearity, but it always comes back to the same ending despite suggesting many other possibilities—it’s made for interpretation; a starting point for complex thought. However, as Yang says, “It’s nice to think that we exist across all these dimensions / quantum mechanics, but the…human experience is always linear.”

You can pay-what-you-want for Intimate, Infinite over on itch.io.