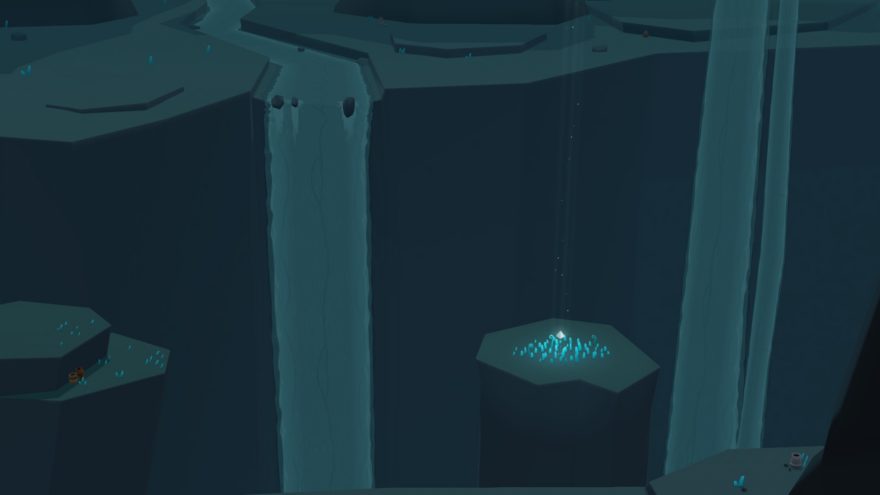 Many words can be used to describe last year’s endless snowboarding game Alto’s Adventure, but the one that stands out for me is flow. This encompassed the curves and angles of its snowdrifts, its wordless storytelling, and how smoothly it reset you to the top of its mountain once you fell. It was a game in harmony with itself, perfecting the loop that most mobile games aim to persuade their players to get caught up in, but giving you beautiful Peruvian horizons to admire rather than stooping to tiring exchanges of virtual currency and statistics.

I was delighted, then, when Ryan Cash of Built By Snowman (creators of Alto’s Adventure) told me that one of the next games he’s working on “focuses on the elegance of movement.” Announced today, the game is to be called DISTANT, and has so far been confirmed for Windows, Mac, consoles, and Apple TV.

“a wondrous voyage through pastel dreamscapes”

In simple terms, it’s a platformer, but it’s the kind of game that is being made to transcend the standardizing labels of genres, as is demonstrated by the full description that Cash gave me: “DISTANT takes you on a wondrous voyage through pastel dreamscapes, to prevent a calamity from consuming the world you once knew. Along the way, you’ll confront an inescapable past, and learn how much you’re willing to sacrifice in your search for solace.” The teaser trailer released today shows a cloaked character jumping across a large gap between two rocky plinths in a dark cavern. By themselves, this figure would not make the leap, but they appear to be aided by some mystical force, which propels them in mid-air as if they had been shot out of a cannon.


Alongside the trailer, I was able to see the first screenshots of the game, which acted as a showreel of the game’s environments: towering peaks, moonlit shores, vibrant meadows, cavernous labyrinths. They were idyllic shots with a keen sense of space and color, the skies punctured by an eclipse, and with faint wisps of wind inviting lift over steep and deadly drops. First impressions is that it’s striving to be elegant, reserved, evoking grandiosity through the impression of epic landscapes and the visual journey across them.

Everything about DISTANT makes it look like a logical follow-up to Alto’s Adventure. But it’s not really that at all, as it’s originally the work of new Australian independent studio Slingshot and Satchel, who started making the game with no tie to Alto’s Adventure at all. Cash and his team at Built By Snowman are acting as publisher and creative partner here, as announced back in July this year, helping to get the word out and advise during the game’s production.

The name Slingshot and Satchel refers to “the staple items you need to embark on a new journey.” That’s what the studio represents for its founders, engaged couple Chris Wearing and Megan Campbell, who left their previous positions at a Perth-based game studio, put some of their money together, and vouched to create more impactful games together. At that point, the scary bit was done—making the leap from a secure position to founding a studio—but the hard part had only just started: making their maiden game.

As they worked on several small ideas to get them started, Wearing and Campbell realized that they all shared a focus on fluid movement juxtaposed against tight controls. “Exploring that juxtaposition between fluidity and precision led us to contemplate notions of the link between beauty and decay, which led to the seeds of DISTANT,” Wearing said. The original title for the game was “Hiraeth,” which is a Welsh word without a direct English translation that encompasses homesickness and grief for things that have been lost. “That feeling of searching for home and trying to satiate the desire to belong is something that has very much guided the development of DISTANT‘s story,” Campbell said.

You can see a little of how this direction has guided DISTANT in the trailer and screenshots, which all contain a glowing pyramid. In the trailer, that pyramid emits an invisible energy and causes plant life to grow around it, which suggests it has restorative powers. It seems to be the object of the figure’s desire as they leap towards it, suggesting that these pyramids are what you journey to collect, and perhaps in doing so are able to revive a decaying landscape, restoring it to beauty.

Wearing and Campbell aren’t confirming that this is the case yet, and aren’t giving too much more away than what they’ve shown, but they did take the time to describe how DISTANT to similar games. “Without giving too much away, DISTANT is our attempt to take a meaningful pause and reexamine what aspects of traditional genres like platformers might be walled off unnecessarily,” Wearing said. “To marry traditionally disparate concepts like ‘zen play’ and tight, satisfying challenge and explore a tonal space where they might not be so mutually exclusive after all.”

For more, you’ll have to keep an eye out on DISTANT‘s website as it’s gradually updated to reveal more of the game.