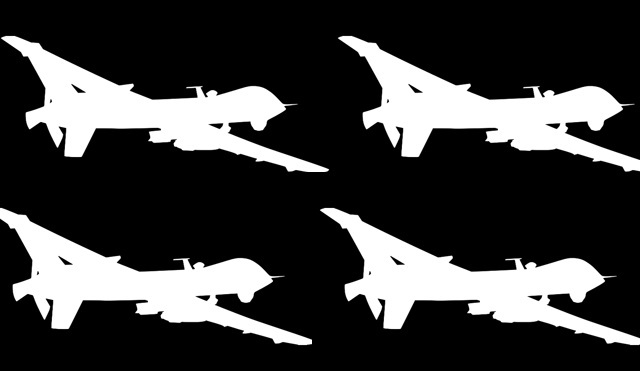 At first, it was nervous laughter. Not that it was funny, but that’s the way people respond to something unsettling. But since then, you’ve lightened up. You’ve narrowly averted a global catastrophe in Black Ops 2, fighting drones with drones in an adrenaline-drenched finale worthy of Michael Bay. You drunkenly hovered a hobbyist craft around an empty parking lot, and everybody except its owner thought it was a riot when it ran out of juice and slammed to the blacktop. (Oh, right, that was me.) You overheard a guy in the street make a joke about a predator drone and erupt in genuine hilarity.

“It’s funny because it’s sad, but at some point, it’s just going to be funny,” Sonny Rae Tempest told me about his motivation behind DRONE, a card game that pushes back against the way these ethically-questionable war machines are being treated with nonchalance by the mainstream.

“I was talking with a buddy of mine at work, talking about the whole drone situation, because it’s really been an ongoing conversation. I got really upset at the whole it’s now part of our culture and it’s okay,” says Sonny, who typically programs, for lack of a better term, videogame poems––poetry generated by an Atari, poetry that you can play through, poetry written in the visual language of the barrel-rolling stage in Donkey Kong. “He gave me a little challenge,” he says. “Why don’t you do one of your little game poem deals about drones?”

So Sonny went home and, over the weekend, created DRONE, a game for two that makes use of a traditional pack of playing cards, although he’s selling for $9.99 a deluxe edition with imagery that is more appropriately-themed. In his redesigned deck, instead of clubs and spades and hearts, the suites have been replaced with the symbol for male and for female. By the time you’re halfway through the game, the table is littered with a body count of innocent victims. “That’s ridiculously awful,” was his buddy’s response when he showed him how to play the next week.

“It’s funny because it’s sad, but at some point, it’s just going to be funny.”

Sophisticated DRONE isn’t. Sonny admits it’s a “childish” game, more or less Battleship meets the matching game memory, but the ideas cohere into something sinister. Two or more players take on the role of drone pilots, checking off their kill lists (a Jack, a Queen, a King) as they move a drone card across the layout, searching for the targets. Accidents happen, and they happen frequently. “It’s not good to see that kind of play. Even with my kids playing it, as soon as they flipped over the first card, it was, like, ‘Oh, you just killed three women,’” says Sonny. “They were like, ‘ooooh… my god.’” You can just picture their disappointed features crumpling sadly.

On the phone, Sonny talks about how the game is inspired by a satirical cartoon on Saturday Night Live, in which four drones unite in a terrorist-thwarting boy band. Then, he brings up how frequently drone pilots develop PSTD. (According to this month’s Harper’s, one in twelve suffer from mental-health problems.) “I fully understand that,” he says, “but at the same time, just quit your job! You know it’s not right.”

Before settling into desk work, Sonny served in the military for eight years, and knows firsthand the kinds of positions they put people in. “If you feel in your heart it’s not right,” he says, “it doesn’t matter who’s in charge.”