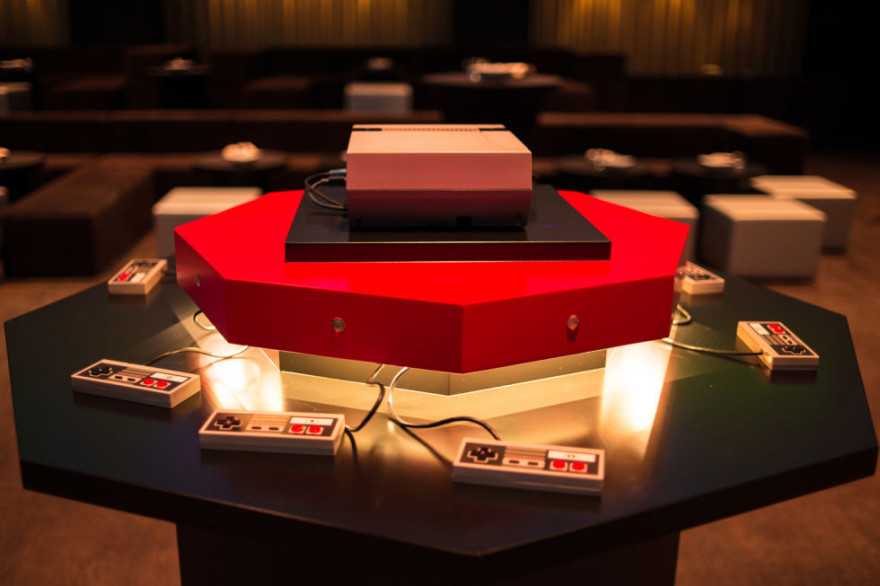 The memories a lot of people share with the Nintendo Entertainment System (NES for short) are typically rooted in solitude. Running across World 1-1 for the first time, embarking on a quest to confront Ganon at Death Mountain, venturing through Zebes to kill Mother Brain—all, for the most part, alone. Multiplayer existed in the realms of games like Dr. Mario, but was always confined to only two players. That changes now.

Disney Researcher Bob Sumner and the ETH Zurich team have created the world’s first eight-player NES, one that also projects onto a 360-degree display. Not modding or hacking the system or games themselves, Sumner and company relied instead on connecting separate DIY hardware, such as an Arduino-based multiplexer to plug in six extra controllers alongside the regular two and feeding up-scaled video into a custom tracking PC.

“elevate the NES console experience into a group experience”

The software on said PC stitches together game footage into a panorama, which is then projected onto the upper walls of the display room through eight projectors. A 360-degree view of 8-bit NES games also has the potential to be output through the Oculus Rift, though it lacks the eight-player co-op and obviously the eight projections, the panorama still resides—you just have to look around to see it.

“Basically, we observed that the 8-bit era of gaming had a huge collective influence on so many people, but the actual gaming experience was typically an individual one,” said Sumner, in an interview with Ars Technica UK. “We wanted to turn this idea upside down, and elevate the NES console experience into a group experience where people can play in a collaborative setting.”

Now, how does having eight players work? The Arduino can compute what gamepads work at a given time: be it through the amount of map a single person has traversed in a level, or a specific amount of time (such as five seconds or so) that has passed, and then the working gamepad switches to another person’s gamepad. The end result is an entirely fresh and unique cooperative experience. In the video “Unfolding the 8-Bit Era” from ETH Zurich, the new DIY technology is displayed in all its wild, hectic glory, as complete strangers work together to complete levels and play various 8-bit era games, from Super Mario Bros. 3 to Castlevania—bringing people together, making a solitary experience a collaborative one.