For the past couple of years, the digital artist and game maker known as BARCHboi has kept himself secretive. His primary online identity has been a logo of a portrait with a black bar across the eyes, overlaid with glitches. Now BARCHboi (real name: Joseph Dowsett) has made himself naked. His new “exploration glitchventure game” DEIDIA comes with an autobiographical making-of document that traces his creative history as far back as 2007, when he was 13 years old, going through all the struggles between then and now that brought him to make his latest interactive artefact.

The document is fascinating for a number of reasons. For aspirational game makers, it’s a valuable insight into one person’s early journey through making simple games to test different aesthetics and coding workarounds. No doubt there will be a bunch of artists and coders who can identify with the cycle of finding enthusiasm to try something new and the demotivation once it gets critiqued by others. 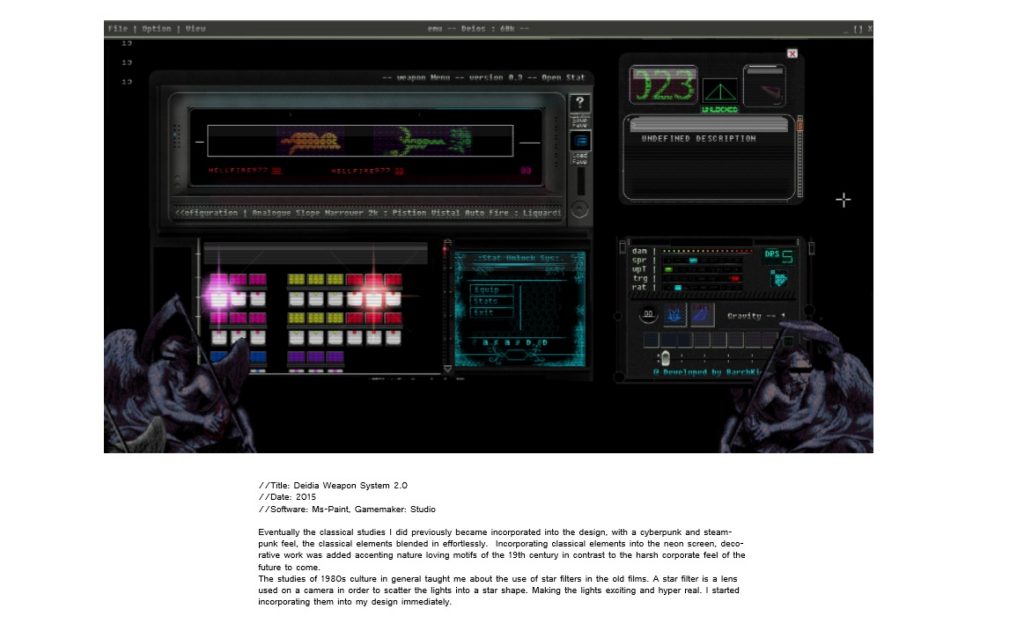 It also shows Dowsett’s personal evolution as an artist, with a thorough rundown of all of his games, which comes with images and explanations for what he was trying to achieve with each one. What struck me most is how Dowsett demonstrates how his early mechanical experiments with Game Maker and exploration of visual styles (from pixel art to felt pens) all culminate to form a cohesive identity under the name BARCHboi.

“to create states of majestic relaxation and escapism”

It turns out there are many facets to that identity and being able to see how the individual components inform the whole is an insightful exposé. It’s rare that an artist who has such a strong and unique identity is willing to strip away the layers and show how others might similarly find their own persona, into which they can channel their creative interests. A lot of the BARCHboi identity can be seen within Dowsett’s 2014 game DEIOS, which is the predecessor to DEIDIA, and the game that brought him to my attention.

While working on DEIOS, Dowsett turned his interests in computer technology and culture of the ’80s and ’90s into his own style of music he dubbed Deitywave. He describes it as follows: “Deitywave contained 1980s synths mixed in with long reverbing sounds and pads; and was aiming to create states of majestic relaxation and escapism, inspired by films/ music such as the Never Ending Story, MGMT, Vangelis, and The Naked and the Famous.” There are aspects of this seen in his games, which are strongest in their visual style, developed over many years by Dowsett who experimented in MS Paint to arrive at the distinct rugged pixel-art strokes he’s known for.

Later, following a study into the Romantic movement in art, BBS and text terminals, and vaporwave, he invented the Barchian philosophy: “a hyper nature, hyper mechanical worldview. In which plants grew out of machines, people lived forever in data archives, no-one could ever become forgotten or truly die, and everyone could experience supreme power amongst technological fantasy software. A dystopian nightmare.” This is a core part of the BARCHboi persona and is what guides the aesthetic of the videogames released under that name.


Ultimately, DEIOS didn’t turn out the way it was initially planned to be, with many features being dropped. The document explains that Dowsett was disappointed in DEIOS and so went out to address its problems. The result after a lot of iterations is DEIDIA. No longer is Dowsett chasing gunplay and a huge, complex philosophical story—DEIDIA is BARCHboi playing to his strengths to deliver a memorable audiovisual experience. It’s a blend of noise and pixel art in which you explore an unstable land, where glitches can be opened up to explore new paths, finding forgotten ruins and abandoned terrain.

The making-of document isn’t essential for your enjoyment of DEIDIA, but I would say that it can help you appreciate and study it much better, mostly as you’ll understand the visual flourishes and the thinking behind it. To get the document, you’ll need to purchase the USB Edition from Deskpop at $20, which gives you the full game, the soundtrack, and the making-of document.

You can purchase DEIDIA for $9.99 on itch.io and Steam. The USB Edition is available for $20 on Deskpop.