When I was a young girl, I read an anecdote about Lara Croft—it said that her iconic look was created when her designer wanted to enlarge her breasts by 50 percent but accidentally entered 150 percent in the window. When he saw the effect he decided that it was great and that’s how the heroine should look—and thus the legend was born. I don’t know if that’s true, but it’s plausible, and the fact that it is tells us something about female characters in videogames, and how we think about women in general. Or maybe—how we look at them.

It’s well-known that most female characters in videogames are strongly sexualized. This happens especially when their bodies are visible, when they can be made to pose for the viewer, sometimes in a manner so absurd it would break their back. However, this can be avoided by not showing women on screen at all. Think of first-person games, which show the world from their protagonist’s eyes. Most often, these games are about men shooting people with a variety of guns. There are, however, titles that try to avoid that, and whether through coincidence or not, they happen to star women. Perhaps the most known cases of this are Portal (2007), Portal 2 (2011), and Mirror’s Edge (2008). All three games ended up having female, non-white protagonists, who are almost never shown on screen. In Portal, you sometimes see Chell if you place portals in a specific way, but Faith from Mirror’s Edge (I’m talking about the first game, not the recently-released Mirror’s Edge: Catalyst) is shown only in cartoon-like cutscenes and once in the final scene of the game.

The similarities between these games are striking. All three take place in mostly white, sterile-like environments, fully controlled and fully observed by the antagonists—vicious AI in case of the Portal games and equally vicious authorities in Mirror’s Edge. The only uncontrollable force in these otherwise totally-ordered worlds is the main character, and the only weapon that this character has is her ability to move in unpredictable ways. It’s a significant deviation from most first-person action games, which typically follow male characters who overcome their surroundings by force. Instead, we have these women using creativity, agility, and an ability to see the paths and doors where, for everyone else, there are walls and barriers. All three games are about striving to survive and succeeding at it against all odds—this is reinforced by the fact that the ending songs in Portal and Mirror’s Edge both have the same title, “Still alive.” It’s not the usual brawny triumph sung out at the end of most games, once everything has been conquered. And that difference is significant, with the title of these songs communicating ideas of how we perceive femininity. 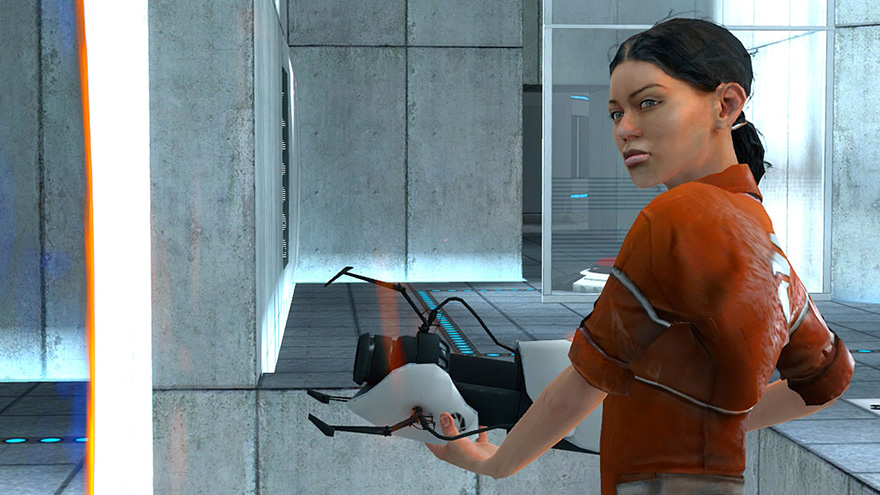 The notion that women can move in ways that are unavailable to men is quite common, especially in videogames, in which they are often supplied as an alternate character to the muscular male hero. Another action game—and a popular one—where you can see this is Borderlands (2009), a game that is to action games what The Expendables (2010) is to action movies: purposely over-the-top and genuinely lighthearted. The only playable female character in this game, Lilith, is able to “phasewalk.” She moves through another dimension, invisible, impervious to bullets, and faster than everyone else. Similarly, in the recently-released Overwatch, we have Tracer, who can practically teleport around the battlefield, giving her unpredictability and high-speed maneuverability.

No matter if you’re looking for a scientific definition, a more humane approach, or a more down-to-earth explanation, when looking at the evidence you’ll always end up at the notion that movement is founded on a deep relationship to one’s environment. Good, efficient movement is about being as much a part of an environment as possible. It’s true for sneaking rogues, for Faith from Mirror’s Edge—the city has paths for her everywhere—for Kat from Gravity Rush (2012), who can shift gravity and run on every surface possible, and for many other female characters. The more you are a part of your environment, the more possibilities you see. Or, you could look at it another way, that even if an environment is designed to kill you or control you, women are able to subvert it to their advantage.

This harmony is also closely connected with beauty—good movement is beautiful. It’s a form of art. In Mirror’s Edge, Gravity Rush, and the Portal games, moving is an act of giving new meaning to space. Falling becomes flying; walls, rooftops, and all kinds of architecture become ladders and pavements. If art is about discovering new meanings in well-known forms—and some people believe it is—the heroines in these games are artists indeed. 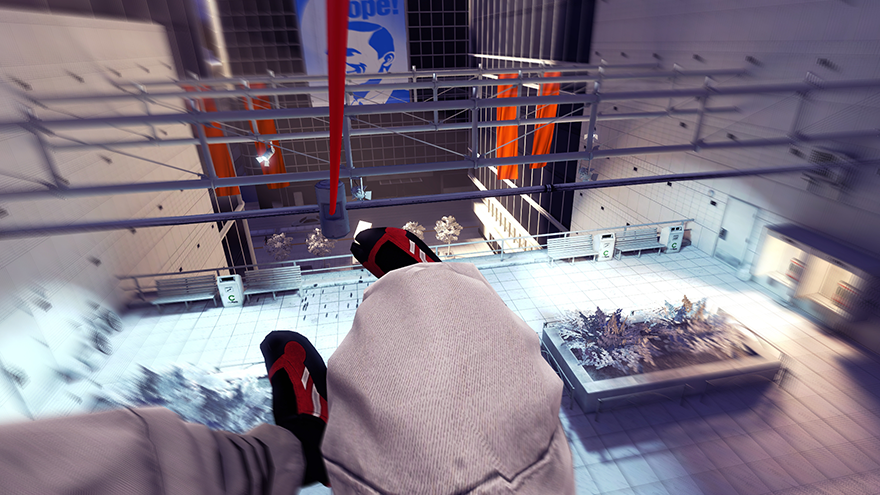 Art (and “good” movement) is also about mastery. Mastery is necessary to move efficiently, especially when you are jumping from roof to roof, a few hundred feet above the ground. But when we think about movement, mastery, art, and femininity, and the way they all connect, the first thing that should come to mind is dancing. And there is a videogame in which all these things are presented at once—the PlayStation 4 title Bound. As can be read in the short description accompanying the game’s trailer, “Bound transports you into a beautiful, fantastical world that exists in the mind of a woman revisiting the memories of her childhood. You’ll use dance moves to traverse vast environments filled with platforming challenges.”

We began with the idea that the female body, when made visible, is sexualized, and then moved on to how videogames have avoided this by creating invisible women, rendered so by their first-person perspective and fast movement. But to stop there would be a hopeless end, as if women in games will only find power in their physical absence and the traces they leave. Bound presents an alternate, it being a game in which the body is the most important aspect—after all, the main character is a ballerina. If you watch the trailer, even if you look at it for a second, you’ll realize that the player’s avatar in Bound isn’t sexualized at all, and it is wholly present. Maybe it’s because the creators want Bound to be a game about femininity as seen from the inside: “As the game progresses, the introspective story unfolds through powerful metaphor and imagery, adding emotional depth to the protagonist’s journey,” the description reads.

“Bound” has many meanings in English, some of which are connected with restriction. That brings up perhaps the most important aspect of movement—freedom. Not the kind of freedom that you fight for, but the kind of freedom a person can have even when she is being held captive as a test subject by a mad artificial intelligence, or when she’s a citizen of the city in which everyone and everything is under surveillance.

In Ursula K. LeGuin’s Earthsea cycle (1968-2001) there is a legend about people and dragons being a singular species a long time ago. At some point in history they split up—humankind chose the riches of the world while the dragons chose freedom. But because they were one species, in every generation there are two children, who are both dragon and human at the same time. In the books, three of them appear, all three of them women in a patriarchal society. There is a song, composed by one of them who is only mentioned briefly—Woman of Kemay. It goes like this:

Farther west than west
beyond the land
my people are dancing
on the other wind.

The sense of longing for another, better world, the certainty that this world simply exists, the freedom that comes from this certainty, and the calm strength that comes with it—to me Song of Woman of Kemay says almost all that there is to say about the connection between movement, freedom, femininity, and many more.