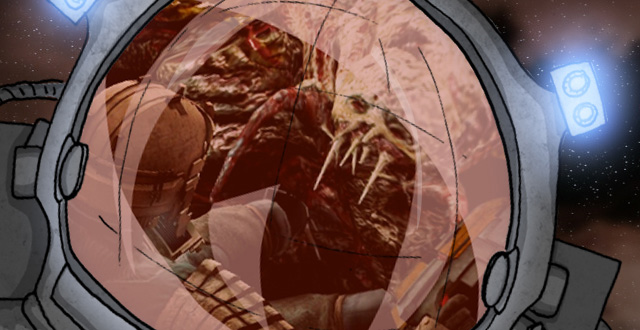 A famous political thriller opens with a scene of KGB officials deploying a dreaded torture technique: complete sensory deprivation. A man is suspended in a vat, in complete darkness, all his senses rescinded. The point of the test is to determine how long it takes for this man to panic to the point of seizure. Without sound, sight, touch, or taste, the poor sap is left alone with only his thoughts for company. A shivering brain suspended in nothing, turning in on itself.

As Dead Space 2 will release next week, I decided to get acquainted with the original Dead Space, a bitter taste of what similar hallucinatory madness in a vacuum could feel like. I wasn’t completely alone, though—I could never play Dead Space alone. My friend, gamertag Raddus, sat by watching, bemused by how easily I lost my composure time and again. Never has playing a game with a good friend, in fact, felt so lonely an experience—partly because everyman engineer Isaac Clarke’s journey to insanity is just slightly more attenuated and drawn out than the techniques of the KGB.

Space is a lonely place to be. This fact was deeply portrayed in last year’s film Moon, in which a frenetic Sam Rockwell paces alone about a moon-based station. In one scene on the moon’s surface, we watch a roaming mining vehicle. From its mouth, a soft, continuous fall of mined rocks in the uncanny light of Earth.

In Dead Space, we can likewise watch a rain of blazing meteors coursing outside the bridge of the abandoned starship USG Ishimura. Each rock turns in the firelight reflected from Aegis VII, the planet below. The buoyant and joyous awe I felt here will prove short-lived.

Isaac experiences de-familiarization and detachment from his body in fragments. He is denied certain senses as he moves through the Ishimura: his sight when in darkness; his hearing when in a vacuum; speech altogether throughout; taste and touch as his body and head are smoothly encased in an obsidian RIG, a protective suit that has tactile weight.

As Isaac walks through each level on repair missions, he learns why the Ishimura is deserted. There were experiments on humans. In a Jonestown-like room, dead crew members sit upright on the floor with white bags over their heads, surrounded by candles. Isaac’s only companions here are Necromorphs, abominations of children and men, abortions on the level of Chris Cunningham’s Rubber Johnny. They lay flat against the dark walls like flying squirrels. They shoot up and down vents with violent, obscure intent.

The real scope of Dead Space, though, is insular and inward. Isaac is denied any avenue of speech, forced to breathe, comically, in belabored horror-film fashion. He is also blocked off by glass from the few people who do remain on Ishimura.

We are similarly blocked off from Isaac, his facial expressions and his voice. We can only speculate on what he is feeling or thinking. This block forces us to imagine his inner life. I instill him with my fear; my thoughts are the very substance agitating Isaac’s suit into motion. We think as one. The fictional illusion of union between player and character here feels seamless and convincing. Moreover, small games within the game—a shooting gallery, a zero-gravity ball game—double over Isaac’s seclusion. I am playing alone in a game I’m already playing alone.

Fear is traditionally elicited through ominous, inhuman soundscapes: In the engine rooms, blasts of hydraulic fire confuse and deafen; the Necromorph death-screams are thick and awful—they sound like a woman giving birth to a barbed steel ball. Elsewhere, Isaac’s weighted boots lock, suction, and release with a pop. He runs, heavy, his breathing ragged. In zero gravity, he only hears his ever-shortening breath, his only companion.

However, being sealed into an obsidian suit means I’m usually experiencing pure silence. When my vision is curtailed, I must strain forward to hear. Groans sound right in my neck; I whirl about and back into a corner. I hold my breath. I get the distinct sense of being all heart and brain, bodiless, two organs buoyed about in my RIG. I am so laser-focused on reacting properly to my awful surroundings that I have become a self-sustained loop from adrenaline to thought and back again.

At these moments, I rely on seeing by my plasma cutter’s blue light. In its dim blue circle, the mangled gunshot-victim faces of Necromorphs burst into vision. Boomerang-shaped creatures scuttle crablike across the floor in thick packs.

In rooms with no gravity, ink-black octopus-babies float when killed. At one point, I have Isaac snipping them off at a distance, then flying to nearby platforms to watch them cartwheel backwards into the air. Drops of their black blood float upwards. Isaac is envious of all this death, unraveling in silence, then suspended. Death would be preferable to being alone and hallucinating in the middle of Space.

The most potent representation of silence and solitude in Dead Space may be the Church of Unitology, organized around an alien artifact called the Red Marker. Isaac must eventually move this enormous, pincer-shaped, red-black stone to the surface of Aegis VII to complete the game. It is spectral, obscure, and filamented through with a terrible ruby line of incandescent hieroglyphics, the language of the Church. It may or may not be the reason for the plague of madness that seized the humans onboard.

At this point in the game, though, I can’t be bothered to care whether the Marker has caused my own madness or widespread death, what its unreadable writing means or even why I am even tasked with its transport. All I know is that it speaks to a powerful fanaticism that reminds me of people joined together in faith, an experience I am not part of. The Marker’s origin is in shared, communal belief, and yet I am alone here, hatefully bound to it, strained and delirious.

The Marker feels to me like the very origin of silence: the silence of death, the silence of prayer. If I wanted to pray now, if Isaac were that type of person, which I am not, he—I, could not aloud. If I did choose to, though, I would pray silently: for a return to speech, to companionship, to gravity, to the certain heft of flesh and sense. A return to my body.