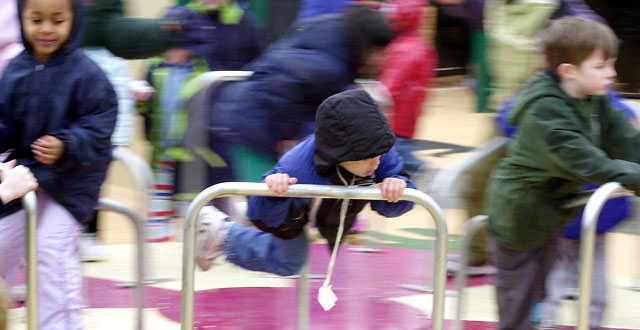 Before Xbox and PlayStation, there were arcades, and before arcades, there were playgrounds. Before playgrounds? There was just play. From street games to arcade games, public joy to public humiliation, Issue #4 of Kill Screen reveals how we’re playing together.

Simon Parkin witnesses a Dance Dance Revolution master hustling a crowd in London. David Wolinsky signs up for a Donkey Kong class taught by none other than Steve Wiebe (The King of Kong); can Wiebe get him to the kill screen? (Spoiler: He doesn’t.) Jon Irwin tells the troubled story of Nintendo’s first 3D console. Brian Taylor reports on real-life Quidditch—minus the magic, but with the brooms. Kirk Hamilton takes to the streets of San Francisco in the Go Game. Filipe Salgado reports from the libraries of Toronto, Majed Athab surveys cut-rate arcades in Manila, and Mathias Crawford takes us back in time to the sculptors, dreamers, and underage crooks behind San Francisco’s oldest playground. Tracy Fullerton introduces the concept of masterful play. And Chris Baker goes up against one of the biggest stars of professional gaming—with ego-crushing results.

We’ve got interviews, too! Michael Abbott interviews gamification doomsayer and ex-Disney Imagineer Jesse Schell, and Jason Johnson interviews Jim Babb, the designer of Must Love Robots and Socks, Inc. And because it’s not enough to read about games, Lana Polansky documents three street games you can play yourself.