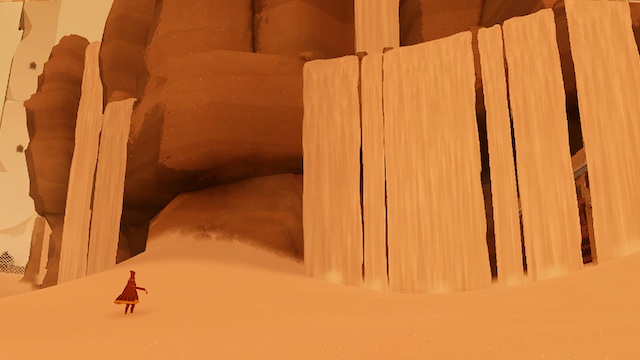 At the Game Developers Choice Awards in 2010, Chinese game designer and cofounder of thatgamecompany Jenova Chen took the stage to receive the Best Downloadable Game award for Flower. In a speech more reminiscent of the noodling on Oscar stages, Chen made a potent aside. He had recently lost his girlfriend during the development of the game; but Flower, which places you as the wind beneath a flock of petals on a grassy landscape, served as therapy. He felt better about his work and hoped that we would feel the same.

If there was a mantra for the Santa Monica-based thatgamecompany, it would be “Feel Something.” They are the most public successes of USC’s Interactive Media Division, where under the tutelage of respected game designer/theorist/Kill Screen contributor Tracy Fullerton, students are taught to lead with their heart, not with code.

Typically, game designers pick a genre first—first-person shooter, sports, simulation—and then tailor their ideas to the form. For students of IMD, however, how you feel comes before how you do it. Rather than making a racing game, for example, Chen told me in an interview years ago, he would rather focus on the feelings of attachment one might have for their vehicle as an enthusiast. “It can be very limiting otherwise,” he said.

That games-as-feelings approach has served thatgamecompany well. Chen, who teamed up with former experimental theater producer and fellow USC IMD student Kellee Santiago, found early success (and a three-game contract from Sony) in Flower and Flow, a microbiotic undersea adventure.

Journey, a downloadable title for PlayStation Network and the final game of TGC’s contract, follows a vein very similar to its predecessors. We open with a dune, a vast one. As the name would imply, Journey is a travel narrative. You are a wanderer of sorts, a nameless vagrant bearing the loose styling of the whirling dervishes of Turkey (or the cast of Sex and the City 2 in Abu Dhabi). A mountain in the distance, a clear homage to the monstrous Orodruin from The Lord of the Rings, beckons you and serves as the only beacon throughout your entire quest. The strings lilt and you are on your way, toward something, a mystery that never quite becomes clear throughout your entire, um, journey.

It is immediately clear that TGC wants you be in an emotive state of mind. I am playing a serious game that will take me on adventure through the heart of a foreign land, that will challenge my inhibitions, that will leave me shaken at my core. My spirit will shatter like porcelain and I will be speechless for days afterward. But I will learn to speak again. I will learn to live again. This game will be my resurrection.

And when you hear Chen talk about games, this what you believe that Journey will do; and when you boot up Journey you want to feel that this will happen; and it is about an hour in that I realize that I’m already disconnecting from Chen and TGC’s latest work, that despite the studio’s attempt fights so hard to get gamers like me to “feel something” admidst a barren Call of Duty sea, I feel very little at all.

Am I a bad person?

The first thing you notice about Kelly Reichardt’s 2010 darling Meek’s Cutoff, a historical disaster flick about an Oregon Trail journey gone awry, is the pace. To say it’s slow is an exaggeration—the movement is disastrously sluggish, from the replacing of wagon wheels to the apex of lethargy: a comical two-minute sequence of Michelle Williams painstakingly loading a 19th-century musket, step by step. Reichardt explained her dedication to the crawl to The A.V. Club this way:

For me, the constant slowness… I don’t watch a ton of American film, so my sense of timing, I guess, is different. But time was a completely different thing, and nothing was immediate. Everything took effort and had some procedure that you had to go to. Like even putting your shoes on.

That approach is clearly pedantic. Reichardt, knowing most people’s expectation for the rip-roaring Westerns, is teaching us a lesson about patience; and more importantly, about history, people. It’s the film equivalent of putting a treat on a dog’s nose and walking away, an antidote to the immediate fragmentary needs of digital age. Salvatory satisfaction is nearby, but painfully elusive.

To soften the heavy hand, Reichardt maintains your interest through scenery. There are the tortuous winds across the alkaline salt flats that torment the wagon drivers, and the bright sunbursts across fallow plains without a hint of water. These are all visual reminders that Reichardt is in control: she is showing you things that you are not capable of seeing on your own.

Like Meek’s Cutoff, Journey is impeccably “shot,” a conception of beauty delightfully fueled by the game’s lead artist Matt Nava. A sad consequence of the recent era of games (and a note we’ve struck several times before) is that new and better technologies have equipped game designers for an artistic arms race to see who can stuff the most polygons on the screen, the most feathers on a bird, the most leaves on a tree, and so on. It is a fool’s errand in that it mistakes artistic value with realism—failing to note that technology, such as the camera or in this case the Cell microprocessor of the PlayStation 3, can be simply enough.

Journey is not the Sahara, but thatgamecompany’s personal desert.

What makes Journey sing is not that it looks real, but that its version of reality bristles with the artists’ brushstrokes. The game opens with sand, a common theme, rolling over dunes; and that mountain, alight with a mysterious, ethereal shine, beckons you forward. Fabric, a key motif in Journey, billows and wafts lustfully, beckoning you to touch it. Just as Grand Theft Auto IV was not a replica of New York City, but Rockstar’s interpretation of the metropolis, Journey is not the Sahara, but thatgamecompany’s personal desert.

There are moments where the scenery is quite captivating. At one point, you skate on sand through a kind of temple. The perspective shifts to profile, and there in silhouette is your little figure, dancing side-to-side among a flock of Persian rug-like creatures that are ostensibly your friends. The sequence ends with an explosion that hurtles you out.

And therein lies the problem. For starters, you’re probably wondering what the game actually plays like, and honestly I wish I could tell you. The primary mechanic is walking, and, well, jumping. But unlike in the world of Mario, where the leaps are filled with childish resonance and playful buoyancy, jumping in Journey is merely an aside on its own. Movement and navigation are merely tools to see the world that TGC has created, and have the same limiting feel as the shuttling of a safari. They are merely reminders that I am operating in Chen and TGC’s world. Like any good steward of nature, they are asking me to “leave only footprints and take only memories.” This game is about their Journey, not mine.

Ironically, that top-down approach is exactly what has made the Mario series so successful. Creator Shigeru Miyamoto’s martinet-like control has been the behind-the-scenes hallmark of the Mario universe, as Nicholas Paumgarten outlined for The New Yorker last year:

In fixing games, [Miyamoto] relies on his taste and intuition. And then he asks family and friends to play them. Nintendo doesn’t use focus groups. “I always remind myself, when it comes to a game I’m developing, that I am the perfect, skillful player. I can manipulate all this controller stuff. So sometimes I ask the younger game creators to try playing the games they are making by switching their left and right hands. In that way, they can understand how inexperienced the first-timer is.

And that is why Mario games are so linear—Miyamoto doesn’t trust your opinion, only his own. Yet Journey presents itself as an open world. There are no walls on these dunes, and the wide field of vision gives the sense that the world you currently inhabit is indeed endless. (A fierce wind blows you backwards should you wander too far.)

All of this makes me wonder why thatgamecompany bothered to make a game at all. If one wants complete control of what I am supposed to be feeling at any given time, there are other mediums that do that much better than games. At their best, games are unpredictable, irascible little beasties who walk and talk with their own character and create a wide range of responses to their players. Film is far more malleable.

Now the chief response, I’d imagine, is interactivity. Specifically, Journey was designed and marketed with an online aspect that allows you to connect, but not speak with, other players in the world. This is certainly a novel idea—to look but not talk, and only communicate through a pinged “hey.” But I decided to play the game solo, before its release, and so my experience was alone and totally my own. Frankly, I liked it that way and it allowed me to focus one-on-one with the work in front of me.

The danger is in allowing the cinematic sentimentality to mute the unruly potential of games.

My chief worries for Journey are twofold. The first is aesthetic. One of the critiques of the mainstream game world, the Gears of Wars and Battlefields, is that those games fetishize spectacle as central to their appeal. “Real gameplay footage” is the marketing focus of their commercials, while the indie world that fashions itself after the New Hollywood Coppalas and Lumets of the ’60s and ’70s is focused on a novel way to make games.

What I find, however, is that Journey is more similar to a big-budget release in that the entire game is centered on cinematic cues. Turn a corner in the hallway, an immense flying centipede-like creature yawns past the window. These are the cues and notes perfected by games far outside the budget of Journey—not that the game performs them poorly, but its use of them suggests a highly passive experience. These are things TGC wants us to see, and we better damn well make our way through them. The danger is in allowing the cinematic sentimentality to mute the unruly potential of games.

My bigger concern is more damning. What Journey presents is a singular vision of its protagonist and its world. There is no moral ambiguity about my mission or the world I must attempt to save. The protagonist at times is accosted by larger, cloaked angelic figures adorned in white, and there is never a moment that I am questioning that I am on the side of truth and justice. I was looking for a moment of revelation akin to what Rilke wrote: “Perhaps all the dragons in our lives are princesses who are only waiting to see us act, just once, with beauty and courage. Perhaps everything that frightens us is, in its deepest essence, something helpless that wants our love.” Sadly, that moment never comes.

The art that I’ve come to respect is messy and opaque. It’s the world of The Wire, the paintings of Francis Bacon, the shrill dirtiness of The Clash. I like mess and Journey is too clean for my liking. I want self-doubt, confusion, loss, disgust, failure—then I want triumph. That’s a journey more to my liking and my reality.