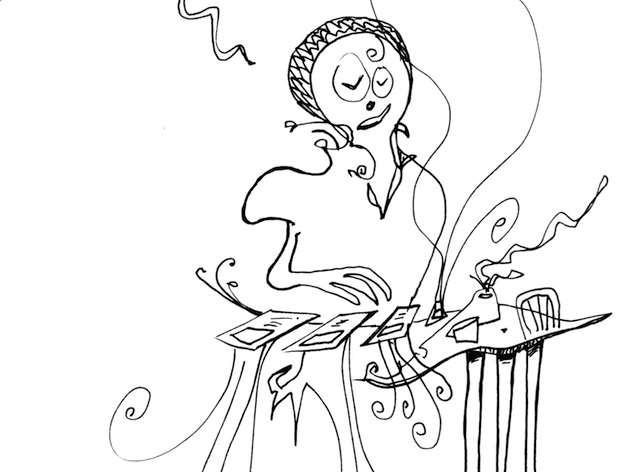 Boardgames, unlike some creative mediums, do a decent job of crediting the designer. You’ll often find the creator’s name on the front of the box, situated cozily next to the title—much like the “a film by” credit in the cinema. That’s how Donald X. Vaccarino has become a well-known name among tabletop gamers. His card game Dominion (2008) was a smash hit and a crossover success—winning over avid boardgamers and casual card players alike.

Still, boardgame fandom isn’t much like other fandoms. Mr. Vaccarino never has to fear about being recognized on the street. My suspicion is that he likes it that way. His description on the popular website BoardGameGeek describes the man thusly: “You know how if you hook tons and tons of computers together, maybe they’ll develop some kind of bizarre mass sentience? That’s Donald X. in a nutshell.”

My attempt to cram a man I never met into a nutshell is a little messier. Now that Vaccarino has two more published games to his name (not to mention six expansions to Dominion), it is tempting to try to find a common thread between the man and his games. Just as one might confidently say that Quentin Tarantino is a remixer of exploitation movies, or that the Neal Stephenson explores the ways that humans make and surf massive systems, there is a pat way to describe Vaccarino’s already significant contribution to boardgames. As a designer the man is interested in modularity and variety—in making games with interchangeable parts that play differently every time they’re laid on the table.

Dominion is considered the granddaddy of the deck-building game. The notion of deck building is a nod to collectible-card games like Magic: The Gathering, where players buy and collect rare cards and construct a unique deck to play against their opponents. Until Dominion came along, deck building was something that was usually done at home, alone—with one very important exception. Because the hoarding of powerful cards can turn any collectible-card game into a kind of cash-driven cold war, with ultra-rare cards fetching as much as $10,000, players devised a tournament variant called a “draft.” Here compositors would sit around a table with several sealed packages of cards. They’d open one pack, look over the 13 or so cards inside, and pick one, passing the rest to the player next to them. By the end of the draft each player had cobbled together a deck that they would use in the coming tournament. The draft was a way of leveling a playing field that had been meticulously terraformed by hardcore card collectors.

Vaccarino’s Dominion captures the fun of building a deck on the fly, but compresses the time between adding a card to your pool and testing its efficacy down to seconds. Imagine the impossible notion of building a race car and racing it at the same time. When you’re playing Dominion you feel the sensation of adding a new part to your engine and almost immediately sensing the wind in your hair.

It’s a highly modular game—one that offers incredible variety. The original Dominion box comes with 25 different “Kingdom” cards, of which you select 10 to draft from for each game. Do you dabble in the dark arts with the Witch card, cursing your opponents with cards they can’t use, or play the builder and use the Smithy to grant you more card draw?

Imagine the impossible notion of building a race car and racing it at the same time.

Math nerds will tell you that 10 taken from a group of 25 with no repetition gives you a whopping 3.2 million different potential scenarios. As it stands, it would already take 182 years of constant Dominion play, at 30 minutes a match, to experience every configuration of the original boxed game. With a total of 152 Kingdom cards added since 2008, it would take 76 billion years to play every possible iteration of Dominion at this point. The game’s latest expansion, Hinterlands, seems to acknowledge with its name that Vaccarino might be pushing it. How much replay value is too much?

A friend recently joked that it only takes 40 games to become bored with Dominion. I’ve played with some who claim to have “solved” the game—thanks to a strategy called “Big Money” that focuses on buying cards worth coins in the game. It is a somewhat joyless way to play Dominion,like bunting your way through a World Series. Others use AI simulators to discover new approaches to play, isolating what they call the “DoubleJack” variant of “Big Money.” Players buy two Jack of All Trades cards—effectively wildcards—and spend the rest of their efforts acquiring money cards. What’s interesting about this approach to Dominion strategy is that it underlines how mere humans only experience a tiny bit of the game’s variety. If billions of years are needed to fully explore Dominion, the big picture may not ever be entirely evident to us.

My attempts to find a common theme between Donald X. Vaccarino’s games began to gel last November at the BoardGameGeek convention in Dallas, Texas. That’s when his latest game debuted to a crowd of the most fervent boardgame aficionados.

Kingdom Builder’s variety comes from a modular board and randomly drawn rules. I found that my first half-dozen games of Kingdom Builder encouraged a fair amount of argument around the rules of the game. It’s not that the rules aren’t clear and concise as to what is legal and what is not—but each game initially felt so different from the last that it seemed like some plays just had to be outside the realm of possibility.

In Kingdom Builder three randomly chosen win conditions dramatically change how players approach the game. Sometimes these seem like they work together, and other times chasing one goal hurts the player’s chances to satisfy another.

When players discovered strategies that paired nicely with the randomly generated goals, it felt like they were cheating—but that’s only because an approach that failed in one play could turn out to be a game winner in the next. Changing the rules didn’t just make each new game feel fresh, it managed to startle us and set us at each others’ throats.

If billions of years are needed to fully explore Dominion, the big picture may not ever be entirely evident to us.

Nefarious, the third game from Donald X. Vaccarino to debut late in 2011, runs afoul of its variety. The game is unplayable in at least one configuration.

Nefarious is a quick card game that casts players as mad scientists building wacky, potentially evil inventions. The point of the game is to gain the cash and cards you need to build your inventions before your opponents do. And one of the game’s clever twists is that you can bet on the actions your enemies will take, and earn money more money if you guess correctly. Like in Kingdom Builder, the rules also vary from play to play. Each game starts with the random drawing of two “Twists,” variants that tweak or break the base rules. Without Twists to the game, it could feel stale after a couple of hands.

But this kind of variety can also backfire. My group stumbled onto a somewhat timely combination of Twists that made the game unplayable. Two Twist cards, “Wall Street Elite” and “Unions,” bore rules that, when applied together, made the game impossible to play. In such a game players would never be able to build an invention—the game would go on forever.

Donald X. Vaccarino himself admitted on the BoardGameGeek forums that this impossible pairing of Twists was indeed a bug—and that said flaw has gone unnoticed in various prototypes of Nefarious since 1999. In a videogame, this bug would be the equivalent of a frozen screen—a Ctrl-Alt-Del game breaker. It took players months to discover what a decade of playtesting couldn’t ferret out. Vaccarino suggested a fitting erratum for the Wall Street Elite card that notes, “Do not play this with Unions.”

He couldn’t have planned—or predicted—a better way for a game to break. The Nefarious bug also helps feed my attempts to understand Vaccarino through his work. Here’s a man interested in permutation, whose games are all malleable. And sometimes, in his mad-science experimentation, Vaccarino allows the rules to bend so far that they break. String together all the computers in the world and the bizarre mass sentience still won’t have the processing power to sniff out every bug.

Illustrations by David Calvo. Images from Kingdom Builder and Nefarious