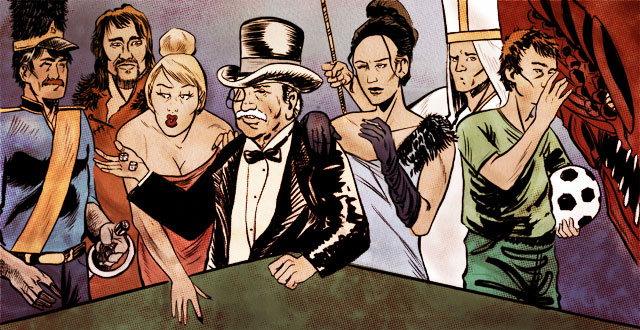 
You’re the thimble. And you find yourself on North Carolina Avenue. Rent there has left you with only 20 dollars to your name. Boardwalk is loaded with your opponent’s hotels, and it is your turn to shake the dice. The odds, in this case, are stacked against you. The most common sum rolled on two dice is seven. And the pity of this situation is that you’re powerless. You’re at the mercy of the dice. Swept around the Monopoly board by their whims, you now await their fickle judgment. The dice decide whether you lose now or live to pass Go and take another lap.

It’s this feeling of powerlessness that makes many older boardgames feel like slogs—and it’s the reason that millions of them sit dusty in closets. A game of Trivial Pursuit can drag out for ages as players try to collect their multicolored pie pieces. Risk, though more strategic than most family boardgames, can be soured by strings of bad die rolls. And any kid will tell you that Chutes and Ladders is a hoot when the dice are rolling your way and a total crock of shit when they aren’t.

Yet there’s something thrilling about shaking a fistful of dice. The clatter of the bones against felt or tabletop is a visceral pleasure. And there’s that breathless moment when everything settles and you’re reading the results. Did I get a Yahtzee? But for strategy-minded gamers, luck isn’t good enough. That’s why Klaus Teuber, when crafting his poster-child for the modern Euro-style boardgame, found a new job for the dice. There’s still a random element in The Settlers of Catan—the dice determine which regions on the world map will produce goods. When players roll the dice they’re not hoping to miss Boardwalk. They’re praying for rain. But Teuber’s game gives players the opportunity to mitigate randomness by settling (essentially betting) on places where it is most likely to rain.

The clatter of the bones against felt or tabletop is a visceral pleasure. And there’s that breathless moment when everything settles and you’re reading the results.

Troyes, designed by the team of Sebastien Dujardin, Xavier Georges and Alain Orban, puts the dice to work in a fascinating fashion. Each round of the game begins with players chucking a fistful of colored dice. The red represent military, the white religious, and yellow civil. They’re all collected in a town square divided into regions controlled by each player. The mob of dice represent workers that can be tasked with jobs like generating money, gaining influence, or battling military threats. It’s a mechanic known as worker placement—a common technique used in Euro-styled games such as Puerto Rico and Agricola. Players place one of their tokens on a board space that allows them to harvest goods, erect buildings, or hire more workers.

The interesting wrinkle in Troyes that each worker has a variable strength depending on how the dice fell. Players can swipe dice from their opponents’ regions, but they’ve got to cough up deniers to do so. Players get further control over the dice thanks to influence—a power that can be spent to re-roll dice or, if you’ve really got clout, flipped over so that a one-pip result becomes a six. There are even actions that let you further futz with the value of your dice. The Priest, powered by the white dice of religion, allows the player to add three to each of their yellow merchant’s dice—a true blessing. Board Game Arena, an online destination for live, browser-based play, added Troyes to its lineup last month.

WizKids bills Quarriors! as a “dice-building” game. The reference alludes to card games like Dominion where players construct a deck of cards as they play. Only here they’re collecting dice—monsters and spells—that will help them defeat their enemies, earn glory, and win the game. Quarriors! was designed by Fantasy Flight stalwart Eric M. Lang and collectible-card game vet Mike Elliot. The game’s handsome metal tin comes stuffed with 130 custom dice in a slew of colors, imprinted with a wide array of arcane symbols. Everybody starts with an identical velvet bag full of 10 dice. Some merely generate quiddity—the catchall coin that players use to capture new dice and summon creatures to do their bidding.

The idea is to gain dice with stronger powers, and thin the weaker ones out of your bag. Portal dice, for example, allow the player to immediately draw two more dice from their bag and roll them. Creature dice, like the Strong Warrior of the Quay, have several faces that can generate more quiddity and a few more that represent the creature itself—notated in the corners with a level, armor strength, and attack strength. You use these summoned creatures to battle your enemies in Pokémon-style combat. If your creature survives to your next turn it earns you glory, moving you that much closer to victory. It’s these melees that make Quarriors! more like a big brawl than deck-building games like Dominion, which can feel like multiplayer solitaire.

Dice Soccer, a new iOS game from LambdaMu games, feels very similar to Quarriors! in the way it erases and rewrites the sides of the traditional six-sided die. Here players fill a soccer field with a squad of players—each capable of wringing different numbers out of a die roll. Beneath each player you’ll see six die faces, each portraying the possible results of their die rolls. Like in Quarriors! the possible results of a six-sided die roll are always clear. But when you’re playing with custom dice—a warrior with three different strengths or a soccer player who has three four-pip sides—these notations are a quick and easy way to understand your odds.

At first your players are wimpy, generating only ones, twos, and threes. Bonuses, such as multipliers or whammies that subtract from your opponent’s dice, further complicate the face-offs. If the total value of your offensive line’s die rolls outnumbers that of the defense, then it’ll steal the ball or move forward. Matches have the push and pull of a typical low-scoring soccer game. That is, if your benches are evenly matched. Dice Soccer is a free-to-play app and thus pretty stingy with new players. If you don’t fork over the cash to buy stronger footballers you’ll find yourself struggling to win matches, left only to grind on lower teams for the necessary cash. Say what you will about Monopoly, but at least the millionaire racecar and the pauper thimble have the same two dice to roll.