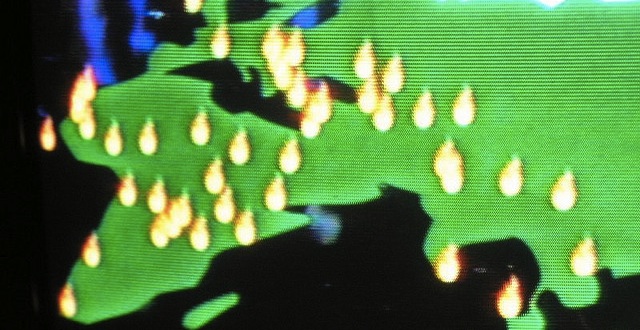 All good nerds know that Gary Gygax is the father of the role-playing game. Less have heard that H.G. Wells is thought to be a patriarch of tabletop wargaming. Ancient army men have been discovered among the ruins of Egypt, and military strategists have been known to use models of the battlefield as early as the 17th century. The Prussian army used a manual called Instructions For the Representation of Tactical Maneuvers under the Guise of a Wargame to train officers in the fine points of battlefield tactics. Such exercises were highly complex and required an umpire to dictate the outcome of skirmishes. But the author of The War of the Worlds is the first thought to have written a rule book to aid civilians in simulating combat on a small scale.

In the introduction to his 1913 children’s book, he called Little Wars a “game of kings—for players in an inferior social position.” In the years since, many royal aspirants have cooked up their own rules with varying levels of complexity and depth. Some are incredibly detailed, taking everything from weather, wounds, and ammunition counts into play. Go to a boardgaming convention and it is not uncommon to see a lone wargamer sitting forlorn in a corner, eager to find someone willing to devote hours upon hours to a protracted, highly involved battle. It is from this dilemma that many have sought to continue the work of H.G. Wells and create a kinder, gentler wargame.

Game over in an online videogame means minutes to cool your heels. When it happens during a boardgame, you could be out of the action for an hour.

Memoir of ’44, from designer Richard Borg, recreates scenarios from World War II, pitting the Axis against the allies on hex-based maps. The game uses Borg’s Command and Colors system—which has been re-skinned and adapted to a variety of themes, including the American civil war in Battle Cry and fantasy settings such as the George R. R. Martin-inspired Battles of Westeros.

Borg’s trick to balancing and streamlining the wargame is to limit player actions to cards they have in hand. Rather than moving and attacking with every soldier and tank in their arsenal, they must pick and play one card, which gives then the ability to move a limited number of units in the left, right, or center part of the board. Players are still on the hook to know the limitations and attack powers of their particular pawns, but the simplification—especially when compared to classical wargames—is profound. A new videogame version of Memoir of ’44 comes to PCs and the web via Days of Wonder. The free-to-play game available in browsers or via Steam further simplifies play by automatically restraining players from advancing beyond their limits or attacking with the wrong number of dice. And online matchmaking takes the pain out of finding willing playmate.

Minnesota publisher Fantasy Flight has made a name for itself making games licensed from popular geek properties like World of Warcraft. Its adaptation of the videogame Gears of War, designed by  Cory Konieczka, shows a strong understanding of the source material. This cooperative boardgame pits players against waves of Locusts—horrifying, gun-toting, monsters who are bent on killing and enslaving humanity. As in Memoir of ’44, player actions are limited to the cards they play in hand. But in a clever turn those same cards count player health. Spend too many of them and you risk bleeding out. Each player also takes a turn controlling the enemy horde—randomized cards dictate how many of the beasts to spawn, how swiftly they move toward the good guys, and how many attacks they rain down on your teammates.

Tactics play a part. Soldiers are rewarded for making smart use of cover, but tempted to run headlong into battle with a beefy melee attack using the chainsaw mounted on the end of their Lancer rifle. Hardcore rule variants recreate the videogame’s Horde mode by unleashing wave after wave of enemies. One particularly cruel rule variant makes players vulnerable to enemy attacks while incapacitated. Game over in an online videogame means minutes to cool your heels. When it happens during a boardgame, you could be out of the action for an hour.

Tiny Token Empires is a Civilization-style strategy game for iOS, Mac, and PC. As usual, players build empires by building and upgrading cities, churning out units, and using those soldiers to spread out and take more ground. But combat is resolved à la Puzzle Quest—by playing a simple match-3 puzzle game. The impatient can skip the mini-game and let the computer determine the victor. But in evenly matched battles it’s best to do the fighting yourself. Those less interested in the gradual growth of their empire can skip straight to a one-off puzzle that pits you against an army of equal strength to you. Either way the computer offers friction, but none of the unpredictable wit of a living, breathing opponent. For that you need another nerd. There’s a good chance one is waiting, lonely, in the corner of the convention hall. Go introduce yourself.