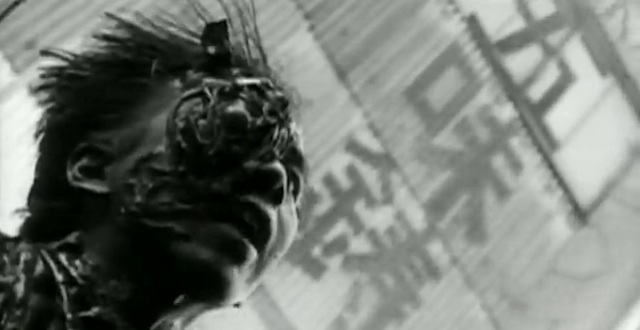 Videogames have plenty of fistfights and shootouts—even a barroom brawl or two. However, these violent escapades often lack attitude, and decapitating zombies can feel like a sterile procedure. That is not the case in the games by James Silva, whose Xbox Live Arcade games The Dishwasher: Vampire Smile and Dead Samurai have a visceral appeal that goes beyond spraying the screen with gallons of blood. A typical encounter leaves you feeling like you’ve punched someone in the face. As I talked to Silva over Skype, the topic of conversation leaped from small talk about The Legend of Zelda to his teenage years dueling in battles of the bands. At times, it seemed I had dialed into an alternate-reality version of Scott Pilgrim vs. the World, only to have that connection snapped like a broken leg when James would suddenly bring up a terrifically gory scene from his repertoire of favorite B-movies.

Where does your distinct style in games come from?

I’ve been asked that a million times and I haven’t ever quite figured out a good way to answer it. I grew up sketching a lot. I realized subconsciously that the way I draw The Dishwasher is like the way I used to draw Ninja Turtles. It’s kind of the merging of comic books and goth. Have you ever seen Versus? It’s by Ryuhei Kitamura. It’s samurai zombies in black leather jacket badass-ery. It was campy too.

Your games are gory and violent, featuring people chopping other people up with meat cleavers and giant, spiked hammers. How serious are you about the violence?

I really like a stylistic violence. Have you seen The Immortals? People have been jokingly calling it God of War: The Movie. It has a bunch of Greek gods in it. There is a part where one of the gods shows up and starts exploding skulls with the hammer in slow-motion. It’s this super-graceful blood explosion. It’s exciting!

Where do you draw the line between good gore and bad gore?

For me, a movie that is about torture, like Saw movies—those make me squeamish. When it’s all about the pain and the suffering—that makes me squeamish. Seeing surgery on TV makes me squeamish. Getting blood drawn makes me pass out. But in a videogame, where it’s about chopping off limbs, especially the way it’s presented in my games, it’s more like taking a hammer and smashing a TV in real life. You love seeing glass explode everywhere, and carnage and debris. It’s all about the kinetic action where everything explodes, and it’s so visceral and satisfying.

Why do you think so many games are about violence?

Violence is something that we want to do without doing. We want to be active, we want to win, and destroy the opposition, but fortunately in our society we make substitutes for them. It’s a simulation. Sort of like paintball is a simulation of war. Football is a simulation of war too. It’s basically two armies facing each other and charging. Sometimes really gruesome things happen, like when that guy’s leg broke, and it was flopping around. Have you seen that video? It’s dirty! I’m so grossed out by real-life violence. But when it’s fake, it’s okay. It’s like sparring, but with explosions of blood.

“In a videogame, where it’s about chopping off limbs, especially the way it’s presented in my games, it’s more like taking a hammer and smashing a TV in real life.”

Who would win in a fight: dinosaurs or zombies?

I don’t think that the zombies could really hurt the dinosaur, but once the dinosaur eats the zombies, he’s going to get sick. That’s dead, rotten, diseased flesh that the dinosaur is eating. The zombies would win eventually but it would be a long and bloody battle. Disease is never factored into these things, but disease has won so many wars.

How do you make a game about disease?

I don’t know. No one would play it because it would be depressing. You should bring up these questions with Peter Molyneux. I don’t like games where the tone is just so down.

Your games have an emo vibe to them. Are you into that?

In high school, I was really big into punk. Naming my company Ska Studios was a nod to the ska-punk culture in the late ’90s. That scene eventually got dissolved into the pop-punk scene. Actually, I have been to a couple of emo shows in my life. I think I saw Thursday. They’re from around here.

You do all the music in your own games, including the epic 13-minute song in I MAED A GAM3 W1TH Z0MBIES 1N IT!!!1. How long have you been making music?

I started playing guitar around 2006. I learned the chords fast and plateaued. I got to the point where I could play a scale to do a solo—not a good solo. Not with too much polish. I hit the wrong … string? I don’t know a lot of guitar terms. But that’s what recording is for. Doing it over and over until you get a good take. You record a bunch of bars, loop the good-sounding ones, and you sound like you have a lot more talent than you do.

Were you ever in a band?

In high school I had a ska-punk band called One Screw Loose, and we were really bad. I was drumming and singing too. I had a headset mike. We had shows at the local masonic temple. They rented out the basement to whoever wanted to use it. Everyone would have their moms drop them off. A couple of the bands we played with ended up on labels. Our closest brush with music success was with Big D and the Kids Table.

Did you ever have any hostility with any of the other bands?

We got into a bunch of juvenile crap. One time we were mad because, unlike shows for grown-ups, the band that plays last was in a bad position, because everyone had to be home by 10 o’clock. They wanted us to play last, and we said screw that. We set up on the other side of the basement and started playing at the same time another band was playing. Everybody was really upset. Then, one time we were asked to play at a high school, and a couple of fans started to do some slam-dancing, and just like that, they pulled the plug on us.

“You should bring up these questions with Peter Molyneux.”

Do you see any connection between making music and making a videogame?

Just in terms of creative energy. You’ll see something. I’d like to listen to this. I’d like to play that. Then, you sit down and make it into reality. There’s the same sort of iterative process, where you imagine it sounding one way and it ends up sounds like something else. There’s also the aspect of making layers of media that work in harmony.

You are more or less a one-man studio. Why do you work on your own?

I’m always trying to become the best at creating everything. Maybe it’s self-entitlement. I feel like I should be able to be awesome at art and music and also at game making. I just have to keep trying. It’s a constant uphill process of striving to be better. I’m a jerk about not bringing in outside work on a project. When people want to do art or music, I get very … bristly. I’m like, “If you give me enough time I will be able to do all of this on my own, so stop trying to cramp my style.” Dead Samurai, Vampire Smile—that’s all me plucking away at a drawing tablet and a guitar and a computer.

What do you think your games say about you?

I’m devoted. Making games has been a dream of mine since I was 12. I love it and I might be a little desperate to keep it. I’m fierce about it. It’s a huge passion of mine to keep creating. You can’t stop me from making games and I will destroy anyone who gets in my way. Make sure you use that as a quote. And then put, “To illustrate how serious he was, he stepped on a spider, staring in my eyes the whole time.”

Images from Tetsuo: The Iron Man and The Dishwasher: Vampire Smile