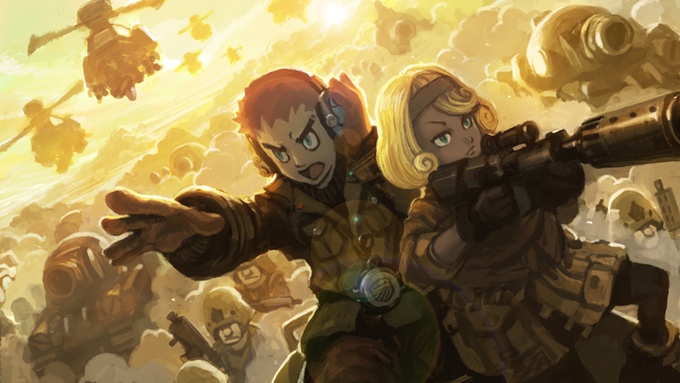 What do the creators of games like I Am Setsuna, Phoenix Wright: Ace Attorney (2001), Demon’s Souls (2009), and SoulCalibur V (2012) have in common? They’re very familiar with Japanese videogame culture and what kinds of games thrive over there. They’ve got their names on some of the most esteemed games of the generation. They’re “grizzled.” And they’re all raring to make a strategy game!

Tiny Metal, the culmination of their efforts under the studio name Area 34, is a turn-based game that’ll focus on intense tactical combat, backed up by a strong story. It wants to merge the grand tradition of military stories—a genre that has spanned from Ernest Hemingway to that one Bradley Cooper movie everyone wouldn’t shut up about—with old-school Japanese tactics games like Advance Wars (2001).

It’s also characteristically cute: Japan has a history of making its Self-Defense Force adorable, to the point that, in 2011, Japanese attack helicopters had moe-style girls painted on them. And then, in 2013, three anime girls were used as mascots to help bring in new recruits to the Japan Self-Defense Force. Reportedly, the mascots led to a 20 percent increase in new recruits in the Okayama prefecture. The success of these mascots has bred many more of them, all cute, smiling, and happy to be enrolled for war.

The fact that Tiny Metal adopts a similar approach to war is not much of a surprise, then. Its lighthearted approach to war vehicles and the deaths of soldiers—exemplified by everything being “tiny” and cartoon-like—is exactly how Japan tends to depict its combat forces. You can see it in other Japanese war games like KanColle, Panzermadels, and War of the Human Tanks (2012).


Cuteness aside, the hero of Tiny Metal is Nathan Gries, an officer in the Artemisian army that is embroiled in a fierce war with the rival nation Zipang. After his mentor, a colonel in the army, is killed in a transport sabotage, Nathan is deployed to strike back against Zipang. The main conflicts of the game are between Artemisia, Zipang, and the mercenary navy of the White Fangs.

So far, Area 34 has revealed four combat units—infantry, scout vehicles, tanks, and gunships—with more planning to be unveiled as the Kickstarter progresses. The campaign mode will be around eight to 10 hours long with branching missions and unlockable loadouts for the standard turn-based combat. There’s also a stretch goal for 1v1 online play, as multiplayer has been a goal of the team for some time. Other stretch goals include Mac and Linux support, a map editor, snipers, extra campaign missions, and more that’s yet to be announced.

Area 34 has already released a prototype, and says it also has the systems in place to complete the game, so the Kickstarter money will go towards additional content outside of the core assets. The projected release of Tiny Metal is June 2017.

Support Tiny Metal and play the demo via its Kickstarter page.