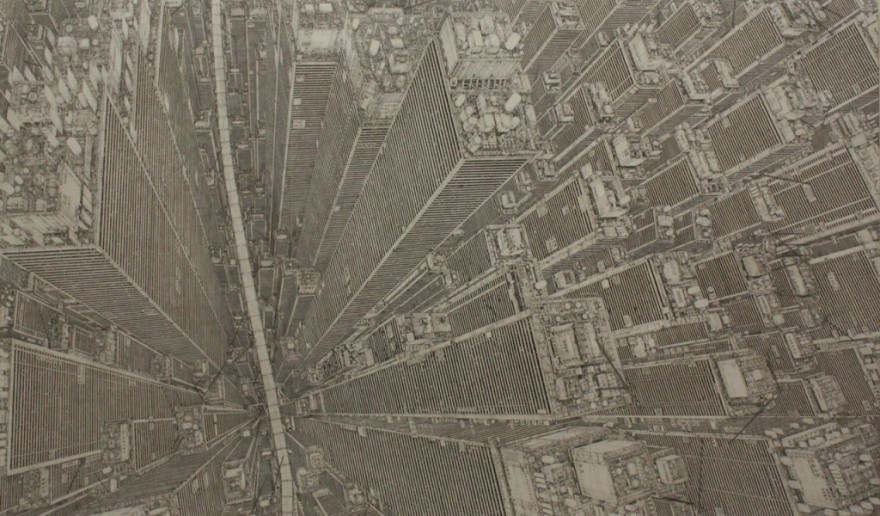 In videogames, cityscapes are often the most interesting types of environments. From Jet Set Radio’s neon-colored, ever-grindable Tokyo-to, to Mirror’s Edge’s parkour-ready, futuristic city, cityscapes in videogames emit the uncanny, but not quite in a Freudian way. Fictional cityscapes are instead uncanny in that they always feel familiar, but still mystify and surprise us.

In a similar sense, there’s a weird ping of fantastical familiarity that emanates from the recent award-winning artwork of 22-year-old Japanese artist Daisuke Tajima. Is it the breathtaking detail solely drawn by a black ink pen? The immense precision of the windows on buildings? The scale of the artwork itself (often times, larger than Tajima himself)? Do the skyscrapers seem to live up to their name to an eerie extent? The answer is yes to all of the above.

A recent graduate of Aichi University of the Arts, Tajima’s rising quickly to prevalence in the Japanese art community. He won the top place at his school for his senior thesis project, a large-scale painting of a cityscape and sculptures of replica battleships. Tajima’s latest work, “gokinchotaikoku II,” recently won the top award at the 2015 Tokyo Midtown Awards, garnering him a 10 million yen prize (approximately $83,000).

“This piece is a world I can believe in.”

Tajima was born in Gose City of Nara Prefecture, a quaint, scenic city in southern Japan, neighbored by towering forested mountains and shrines. The disjoint of Tajima’s birthplace, paired with the mechanical, metropolitan focus in his art, create an almost unsettling feeling—the two don’t match up.

Tajima’s own personal reasons for creating this latest vast cityscape speaks volumes about his creative process. “I wanted to hide away in my own world to ease the loneliness and insecurity I felt from not belonging,” says Tajima. “This piece is a world I can believe in.”

For Tajima, his art of fantastical cities is his escape. For a lot of players, videogames are escapes in the same respect. Both mediums are a way to escape reality of mundane life, but still seek to reside in a place much like their own: that’s why highly calculated, fictional cities are uncanny, through both digital and ink pens.