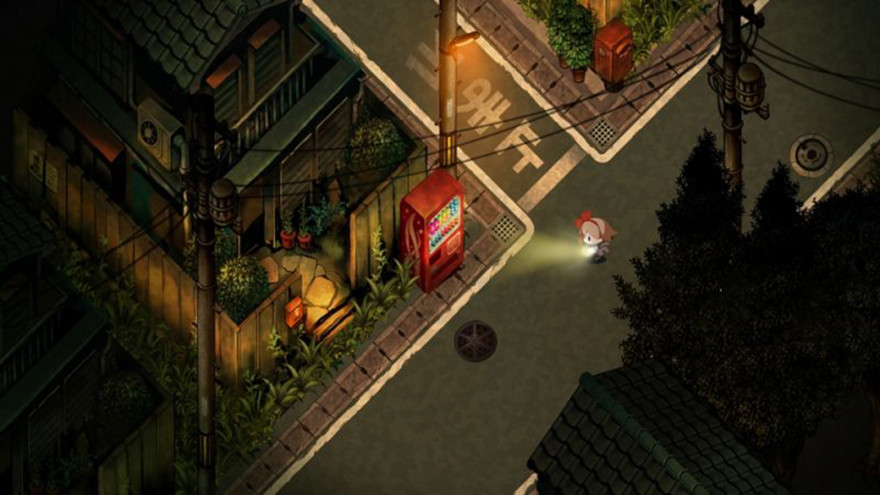 “At night every town…changes” the new trailer for Yomawari tells us. The idea in this upcoming PlayStation Vita-exclusive, from Japanese studio Nippon Ichi, is to take on the role of a young girl whose sister and dog have gone missing. Despite her fears, the girl is determined to find her loved ones, even if it means traversing her town while it’s warped into a different place by the cover of darkness. With the company of only a flashlight, the girl must overcome multiple obstacles; monsters and darkness are scattered throughout her journey.

The horror and stealth of the game are made immediate by the thick black vignette which envelopes the screen. However, there is also something more whimsical here, highlighted by the meandering crescendo of music in the trailer and the dancing light particles which float around the character’s thoughts. This combination of dark horror and eccentric fantasy perhaps brings to mind another piece of media that also had a young girl as its protagonist—Spirited Away (2001).


Studio Ghibli is famous for its numerous young girl protagonists, from their earliest releases, like My Neighbor Totoro (1988), to their most recent (and potentially last) release, When Marnie Was There (2014). Studio Ghibli has also developed a robust following internationally for their work, likely due to their partnership over the years with Disney, who has released many high quality English dubs of their films. It is far from the norm in the west to see stories that focus on young girls as strong and complex characters, which has allowed Studio Ghibli to fill a sorely needed gap in the film market. Yomawari may serve a similar niche.

“Every adult was once a child…” says Yomawari’s trailer—highlighting how the divide between child and adult is often more contrived than we realize. Even though the young girl’s fear is openly mentioned, she pursues her quest regardless. This is similar to what we see and experience in Spirited Away where Chihiro/Sen expresses their fears throughout, and yet still find the will to overcome these fears. The association of “fear” and “child,” and particularly of “girl,” to “powerlessness” is undermined in this way. These depictions allow us to experience and understand that “girl” and “fear” in no way equate to weakness.

In this context, it is very exciting that Yomawari is being adapted for the Western market and gaining wider scope. In particular, the question the trailer leaves the audience with, “Do you remember your fear of the dark?” calls upon us to relate and empathize with the character’s experiences—to the fear, to the fantasy, and to the courage—and if that doesn’t appeal to you, the monsters look pretty cool too.

Be sure to visit Yomawari’s website for more information and to subscribe for updates. Released in Japan October 2015, Yomawari will see its North American release late 2016.