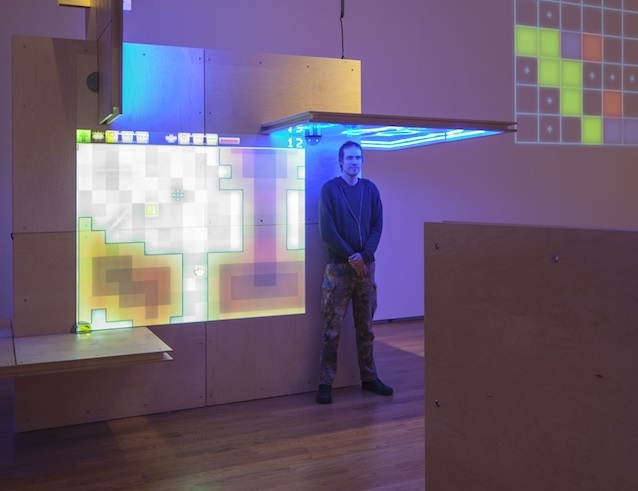 The Davis Museum at Wellesley College is now exhibiting The Game Worlds of Jason Rohrer until June 26th, 2016. It’s a retrospective of Rohrer’s unique videogames, exemplified by his earlier works such as the semi-autobiographical 2D sidescroller Gravitation (2008) which explores, in Rohrer’s own words, his own bursts of “mania, melancholia, and the creative process.”

Rohrer asserts that he is not a “gamer” per se, which has helped him to view videogames as a non-spatial medium that can be repurposed as another form of art. He says that he does not see the confines of videogames themselves and can better tap into their artistic potential. The result is an interactive and immersive experience that combines the sophistication of architecture, music, and movement, yet manages to retain a mechanic simplicity.

They can only perpetually experience

For example, one part of his exhibit, showcases Rohrer’s 2011 game Inside a Star-Filled Sky, which puts the player in a maze with a bit of a twist. To complete the level, the player must do the traditional fighting-bad-guys-and-gain-weapons dance that is common in most fantasy games. But calm, gentle music undulates in the background, and as the player ascends to the next level, they should be shocked to discover that the maze they just completed was actually a tiny part of a much, much bigger maze.

The suggestion is that this larger maze is either hidden inside the player character, inside an enemy, or inside the physical confines of the maze itself. It’s impossible to tell exactly which one. The idea, then, is for the player throw up their hands in angry defeat or embrace the chaos. In any case, there is no real objective here and the player literally cannot win. They can only perpetually experience, forced to face and process their own frustrated emotions—a theme perhaps not so common in videogames.

Where there may be great satisfaction to be found in reaching objectives, Rohrer says his games seek to move players beyond that simple pleasure. They are also personal. He wants players to both revel in and shrink beneath the seeming infinite space of his art, and this exhibit reflects just how much fun plunging into an infinite abyss can be—so long as you know how to relax into it.

You can learn more about The Game Worlds of Jason Rohrer exhibit here.