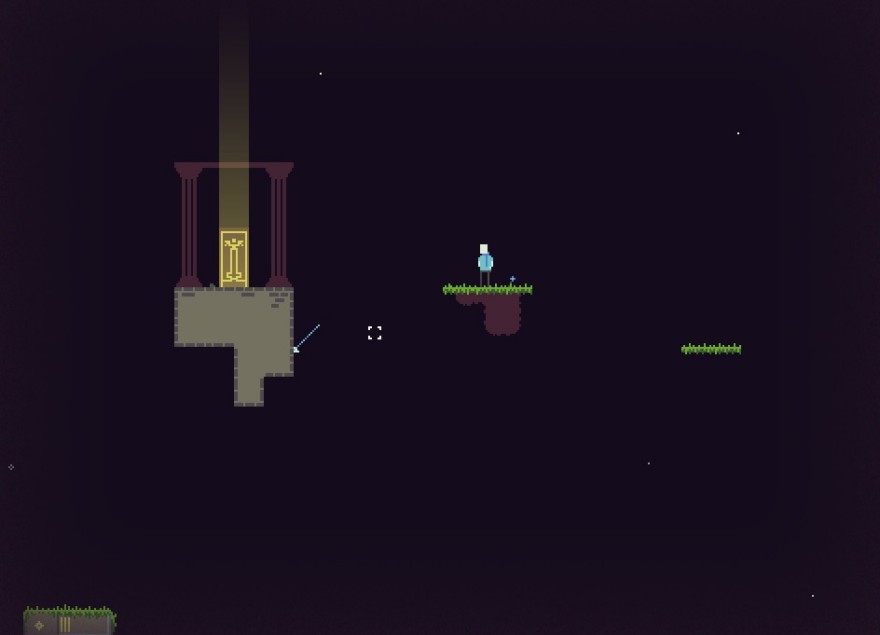 You see that, up there? That’s an image of despair. Looking at it brings me pain even now; my biggest failure. And that’s not even Javel-ein‘s cruellest joke. Not by a long shot (that may be the most self-wounding pun I’ve ever written).

Originally made for Ludum Dare 28, which wore the theme “You Only Get One”, Javel-ein‘s ham-fisted German-English title refers to the one javelin you get to beat its 60 levels with. Yes, just one. It’s a combination of cold steel hunting and playing fetch with yourself.

Judging by his choice of weapon, Javel-ein‘s eager treasure hunter isn’t all that bright. Indiana Jones had his whip; Lara Croft carried her trademark dual pistols; this idiot has a javelin. I’d have let him off if you could climb up the javelin to ascend to out-of-reach ledges, such as in droqen’s Fishbane, but you can’t.

1. You need to kill all enemies in the level to open up the golden gates of the exit.

2. To pass through the exit you need the javelin in your hand.

A ridiculous performance is made of trying to achieve both of these goals simultaneously. What it comes down to is calculating the angle of your deadly projectile. That’s why I’m sure Javel-ein is a mathematician’s wet dream: it’s all velocity and arc lengths.

I prefer ignoring this aspect though. I allow myself the daft mistakes that lead to fret and panic as I try to loop around a pursuing bat and its fatal touch to get my javelin back.

There’s a beauty to being able to create your own disastrous problems and redeeming yourself with a lucky four-kill combo. It’s those moments that have led to my running commentary, in which I pretend I’m a starry-eyed speedrunner, with the admiration of thousands. Cheers are heard all around as I masterfully grab the bonus jewel.

That was a short-lived venture. Channelling my inner Don Cherry ended when the majority of the ground was taken away from me after Chapter 1. Without being able to rely on my jump-up strike-down combo that a solid floor afforded, Javel-ein has become an exercise in fleeing across tiny platforms and kissing the first grass verge I come across.

It’s in pushing this limitation upon you—taking away the environmental structures—that Javel-ein becomes the cruel lover that birthed the image at the top of this article.

Look at it once again. The javelin cannot be retrieved without falling into the depths below. I had tried so hard to throw it from the other side of the level, through the single snake, and to plant it in this lone island of solid ground. I was so overjoyed upon hearing that familiar “clunk” of the spear sinking into stone. But only dismay was found upon running over to see the fruits of my labor.

What a smart, twisted game Javel-ein is.