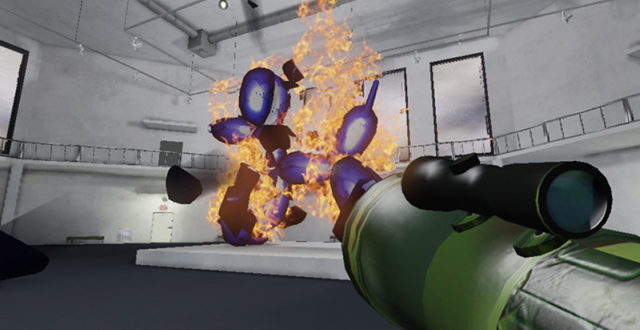 Pop artist Jeff Koons’ recreations of everyday objects been both critically appraised and reviled over the artist’s career. art critic Michael Kimmelman called some of Koons’ paintings “one last, pathetic gasp of the sort of self-promoting hype and sensationalism that characterized the worst of the decade,” while ArtNet called a 2004 show an “eye-popping visual blast.”  But 40-year-old art student Hunter Jonakin sees something else in Koons’ oeuvre: cannon fodder.

As a submission to his MFA thesis show at Florida State University, Jonakin created “Jeff Koons Must Die,” a first-person shooter set in a fictional gallery housing much of Koons’ work. He’d been working with Unreal engine (the same technology used for big-budget shooters like Gears of War) for the past decade, and these seemed like a natural extension of his talents.

I don’t dislike Koons. People are assuming I hated him. His work is interesting to look at, and I knew I’d have to create these digital fasciimiles. It’d be annoying looking at work I hate for three months. He’s polarizing and it’d give people a reason to destroy his work. It was him or Damian Hirst.

Have you ever wanted to actually destroying any art that you’ve seen?

That’s part of the reaction to conceptual art—a lot of it can be alienating. Before I went back to school, I really hated conceptual art. I thought a lot was stupid, and when you feel alienated, there are some strong emotions with that. It taps into something visceral that seems to resonate with people.

There are some people who have specialize in vandalizing artwork, like those Chinese artists who pissed in Duchamp’s “Fountain.”

[Laughs] I like that. If there’s intent and it pushes the piece further, that’s kind of interesting.

How is the piece being shown?

It’s housed in an arcade cabinet modeled after a Q*bert machine from 1982. I looked at a lot of designs and that machine is the quintessential shape. I could have shown it and released it on the web, but ultimately, using the game as a metaphor, I wanted something that signified games. Consoles are multi-use these days—you can watch movies on them. I wanted to recreate that, and it would give a playful tone whereas the title was fairly extreme.

Is there another artist in your crosshairs?

I don’t want to jump right into that. My other work isn’t like that at all. But it’s fun to create things in an interactive way, and I like subverting that technology to use in ways it wasn’t intended to.