On August 15, 1979, a 16-year-old computer science prodigy at Michigan State University named James Dallas Egbert III disappeared. Private investigator William Dear was hired by the boy’s parents to investigate the case and, over the course of his inquiries and evidence-gathering, came to a disturbing conclusion: Egbert and several peers were avid players of a strange game called Dungeons & Dragons, in which the young students assumed alternate personas and explored perilous underground mazes in search of treasure. Dear believed that Egbert’s fragile mind had blurred the boundary between fantasy and reality and that he had come to believe he was living inside of the game. The science whiz, Dear hypothesized, was lost to the labyrinthine steam tunnels running beneath the university. Editorials from the New York Times and the San Francisco Chronicle and Examiner posited wild theories about the emerging problem of role-playing cults.

This scenario—the first instance of public hysteria over role-playing games—is reported with the utmost scholarly precision and detail in Jon Peterson’s Playing at the World, an exhaustive history of Dungeons & Dragons. So it is curious but not accidental that only a few sentences are devoted to informing readers that Egbert had, in fact, run away from school due to issues wholly unrelated to his interest in D&D. For Peterson, the point is not about whether games have the ability to corrupt and endanger their players—this is dismissed as a premise too political to analyze objectively. The point is that some people understand what it means to become someone else, to live in another world born of imagination, and others do not. And, as the adage goes, people are terrified of that which they do not understand.

It is clear within a few pages of Wolf in White Van, the fascinating new novel by John Darnielle, that the author understands: he is a person with deep reverence for the power of imagination. The book’s narrator, Sean Phillips, is an reculsive young man who became physically deformed and impaired as a teenager following a suicide attempt, and now lives a constricted daily life which contrasts his expansive fantasy life. Darnielle’s prose crackles, effortlessly combining rural Americana with a Lovecraftian sentiment. Sean’s world feels lived in, grounded, and yet there is always something dark and strange throbbing in the shadows, which is a source of both alarm and excitement for Sean and reader alike.

Anyone familiar with Darnielle’s lyrical work as leader of the band The Mountain Goats knows his gift for phantasmagoria and developing a sense of place, and here he finds a perfect vessel for his unique sensibility. The novel centers around a play-by-mail RPG invented by Sean called Trace Italian—a kind of choose-your-own-adventure set in an irradiated post-apocalyptic America. The game is where Sean has focused all his creative energy, sadness, rage, and peculiar sense of beauty, and as readers it is in this game-within-a-book that we expect to find the most transcendent imagery, the best Darnielle-isms. Like Sean, we are eager to dive into the fantastical and leave reality behind.

The game is where Sean has focused all his creative energy.

Darnielle obliges, to an extent. The imagery of the Trace Italian—with its desolate wastelands, abandoned shacks, and impossible mazes—feels more real than the people and places of the book’s supposed “real” world. The imaginary is weightier, more substantial, than the mundane, which is profoundly true for Sean and therefore helps us to empathize with him. For Sean, there is only the Trace Italian and the bits and pieces of the world he has culled from movies, television, and fantasy novels. At the same time, our access to this largely internal world is granted only in fits and starts, and always out of order. We are given glimpses into the vastness of Sean’s imagined realm, enough to appreciate its depths while still being kept at a distance. And we are never, never allowed too close the world’s zenith, the Trace Italian itself, a mythologized fortress that represents the only safe haven left in the world. Sean repeatedly tells us that he has rigged the game so that players cannot make it that far; so private is this space that it is unclear if he has even committed his vision of it to paper. The Trace Italian—where one would, at least theoretically, win the game—is for Sean alone. 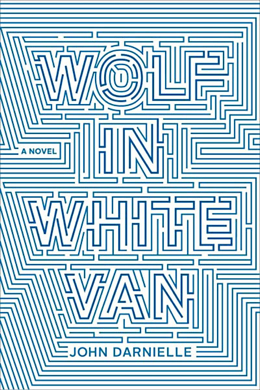 Given the tenderness of Darnielle’s portrayal of a man who exists largely in an imaginary world, it is interesting that much of the plot of Wolf and White Van revolves around an Egbert-like situation in which Sean’s game is blamed for something horrible befalling two of its players. Except in this case, unlike that of James Egbert, the players really did come to harm, and the game really was part of the reason why. Conversely, because the book unfolds in reverse time, we know from the beginning that Sean is found to not be legally culpable for what happened. Darnielle is attempting a delicate balancing act, centering his story around the hyperbolic fears of those who misunderstand games while still evoking the deep and strange magic that emerges when one person creates a fictional world and invites others to share it. That point of contact, when the subjectivity of creator meets the subjectivity of others, is a volatile event, one that can forge social bonds and bridge the gap between reality and fantasy, or blur the line altogether.

Darnielle knows he is wading into controversial waters. Even the title of the novel is a reference to alleged satanic messages in rock music, perhaps the prototypical example of an older generation looking at what is valued by their children, misunderstanding it, and labeling it immoral. Today the target of such confusion is often games, and there is a cultural pressure to pick a side and plant your flag: do you think games are dangerous or not? Darnielle eschews this question. Everything is dangerous through Sean’s eyes; the world is inherently unstable and hard to predict. By dividing ourselves into the two camps of those who understand and those who don’t, we gloss over the mystical and explosive moment that occurs when one person’s internal fantasy becomes a shared experience. Wolf in White Van is not a book about games and society, but rather a book about a specific group of people—bound by a need to flee their respective troubled realities—and a specific game—the Trace Italian—which offered respite but not, ultimately, a permanent escape.

As the adage goes, people are terrified of that which they do not understand.

Within Sean’s game, the Trace Italian is the ultimate haven, the only place one can truly feel safe in an otherwise unforgiving world. It is also, of course, unobtainable—Sean never intends any player to actually make it to the Trace’s inner sanctums. The Trace is not a shared space; Sean cannot bring himself to expose this deepest retreat, this most internal sanctuary, to the catalyst of interpersonal contact. Perhaps the two players who came to tragic ends sensed this, that there was no escape from the horrors of life for them. That privilege belonged only to the world’s creator, if even him. Like those ill-fated players, my own desire as a reader to flee into the Trace was a tantalizing experience: the possibility of exiting the grey depression of Sean’s life for something dark and beautiful was always there, like a carrot on a stick, but never fully achieved. I saw it only from the side, in my periphery, and then it was gone.

Wolf in White Van is a meditation on peripheral vision, on glimpsing but not seeing, grasping but not knowing. Our unease and sense of danger as the book proceeds comes not from Trace Italian’s marauders or irradiated deserts, but a lack of understanding. Sean’s entire life seems to hinge on a suicide attempt that left him exceptionally disfigured, and though we are privy to many details of Sean’s inventive, nonlinear mind, the rationale behind shooting himself in the face is never satisfyingly revealed. It is fairly clear, even early on in the book, that Sean himself has never found a satisfying answer. So this is our Trace Italian, our impossible fortress, the security that we will always seek and never find: the answer to the question, “Why did this young man want to die?”

Darnielle challenges us to look squarely at this question, shrug our shoulders, and be not afraid.