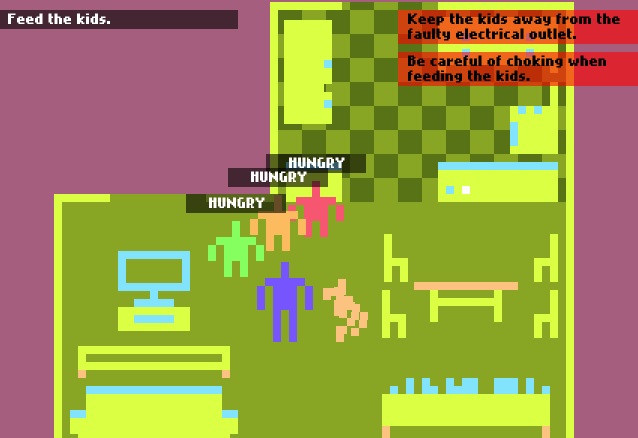 If you’re a parent, or have been a parent, then Pippin Barr’s Jostle Parent will be a familiar experience. If you—like me—haven’t had kids of your own yet, then this will only put you off the idea completely. It’s what Barr rightly determines a more tragic riff on the concept behind Octodad: Dadliest Catch—”you’re a similarly limited person with similarly limited communication skills, but you still have to do this important job of protecting your family,” he writes.

Here’s the set-up: you’re on your own, you have three kids to look after, and all you can do is jostle. Yes, you push and shove your children around as they resist your orders. It’s a mechanic that Barr has brought over from his Hotline Miami parody Jostle Bastard. The idea in that game was to demonstrate the irrational brutality of Miami by reducing it to mindless collisions of pixelated people. You bumped and nudged at a violent velocity to cause upset and destruction for no reason whatsoever.

And so, by utilizing this jostling mechanic in a parenting scenario, Barr encapsulates the angst of the experience, both inside and outside of the game. It communicates the precarious way you have to handle the children under your care (being physical but not too physical) while simultaneously lending itself to the frustration of having your efforts continually counteracted. All you can do is herd them to where you want them to go, pushing them in the general direction, praying they follow suit. Sometimes they turn around and hug your legs when you really don’t have time for it, bringing out a response in me that I’ve heard many a parent issue in public: “Yes, honey, that’s very sweet, I love you too, but we need to walk this way now, c’mon.” I now understand why my mother put me in a harness with a leash attached to me as a toddler.

There’s more to this parenting simulator than this central push-and-pull struggle. As you go about what should be mundane activities (mowing the lawn, eating breakfast) you begin to see the world exclusively by its many hazards. I guess you could call it “parent vision.” Anyway, I actually screamed when one of the kids strayed near a faulty electrical output, nearly being killed by way of electrocution—I felt my heart physically leap against my chest. You also can’t help panicking when transitioning each child, one-by-one (as that’s the only way they’ll go sometimes), between rooms: what are they doing out of your sight? Are they safe? It’s all so frustrating and exhausting. And it should be.

But there’s also humor in the clumsiness of the whole ordeal that reflects the messiness that comes with looking after kids. At one point, in a desperate bid to progress, I was pushing a conga line of leftover breakfast bits, a lawnmower, and a trio of children through the narrow aisle of the kitchen. It was completely ridiculous. I laughed at the sight, but if I hadn’t I think I would have turned to the corner, sat in it and bawled for all eternity.

And that’s not even the most tragic outcome. For me, trying to get all three little ones across a road and into a bus was the killer. Literally, I guess. Yep, at first I was run over by a car as we played with the traffic, and then, in another attempt, one of the kids was struck. In both scenarios the game comes to an end, and then you either mourn your loss, or enjoy being a ghost without any worries or stresses. You are then prompted to try again. Because as all moms and dads will know, there is no proper end to being a parent, even if everything goes terribly wrong, and it probably will, over and over. I’m lucky as I can exit Jostle Parent and be done with my life as a parent (for now). Actual parents are trapped with that role for life. Coming to terms with that is to understand true horror.

You can play Jostle Parent for free right here.