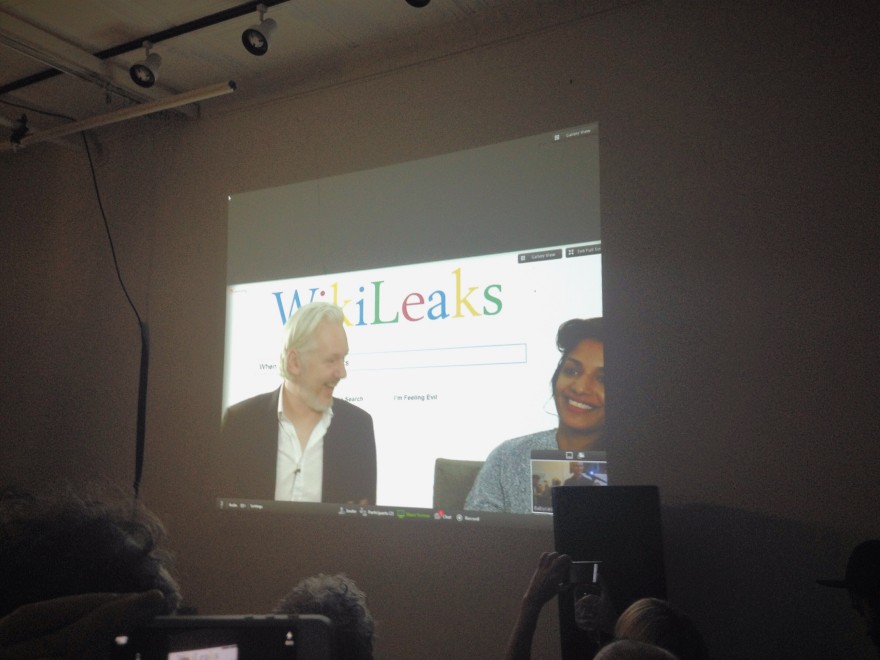 Last night, I listened to Julian Assange, a man who Joe Biden once called a “high-tech terrorist,” discuss how one of the largest corporations on the planet is shaping public privacy in its interest, engaging in widespread “digital colonialism,” and driving humanity to a “dystopia” of standardization of human behavior. This was done while seated next to pop star M.I.A., and the conversation was conducted via a projected live-streamed video. This was also all taking place in an arcade.

That is by far the most absurd paragraph I’ve ever written, yet somehow that also accurately describes my Wednesday night this week.

The reason for the occasion was the release of Julian Assange’s new book, When Google Met Wikileaks (OR Books), Assange’s retelling of a 2011 meeting between himself and Google’s Eric Schmidt while Assange was under house arrest in Norfolk, England. Last night’s conversation took place at Babycastles in New York, moderated by Dan Stuckey of Motherboard.

Despite Mr. Assange’s claim that he was going to be “very boring at the beginning” of his talk, he walked the audience through the early chapters of the book’s premise before a Q&A session. Landing somewhere between an international spy thriller and a chilling warning for the future, When Google Met Wikileaks connects the dots among international players on a corporate and governmental level to argue that the the search giant has become intertwined with the US State Department and the NSA.

Assange wasn’t initially impressed by the meeting (originally arranged under the auspices of Schmidt writing a book); he commented that it’s “disturbing to see someone with so much power with” so little political nuance, and that “his understanding is based from Silicon Valley and friends in the State Department.” It was those State Department companions that lead Assange down a rabbithole of realizations, and which eventually served as the impetus for the book. You can read a full transcript of their conversation on Wikileaks, including Schmidt’s first question about “Thor… I mean Tor,” the anonymity network.

Most of his accusations hinged on Jared Cohen, a former State Department advisor to Condoleeza Rice and Hillary Clinton. Throughout the evening, Assange compared Google not to other larger corporations currently in existence, but to magnates like Standard Oil, albeit one that has “ successfully positioned itself as a playful thing with colorful letters” in its logo.

While Assange was joined on-camera by M.I.A., whose lyrics to “The Message” provide a brief forward to the book, her attendance was more of a show of support for Assange, who still remains at the Ecuadorian embassy in London.

Watching the mixture of book publisher-related attendees and Babycastles’ typical assortment of games-meets-art types interact provided the entertainment before and after Mr. Assange joined via webcam. An attendee and I joked after overhearing someone struggle to understand “an art gallery … that shows videogames … how do they sell the artwork?” Still, it’s refreshing to see people beyond the core crowd of Nidhogg and Samurai Gunn enthusiasts taking part in an event at the art space. Assange joked that “maybe he should’ve made a game” to better fit in with their usual events; somehow I think he’s got some other issues on his mind lately.