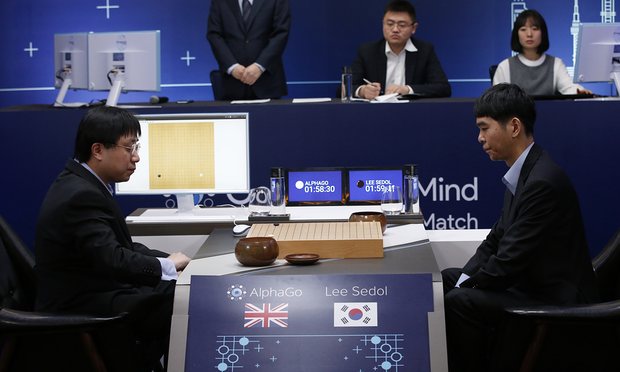 In Tang dynasty China, Go was one of the skills socially required of a certain class of educated elite—along with calligraphy, painting, and the ability to play the stringed guqin, it was part of a kind of artistic quadrivium. The art and beauty of the game are present in the way it is played, but also in descriptions and metaphors for the shapes that appear on the board during play. One of the first shapes shown to new players is the “eye.” If a group of white stones is surrounded by black stones on all sides, it is captured. The same is true if the group has one eye—that is, an empty space inside it—but if it has two separate eyes, any black stone played into one would be captured (the other would stay empty, and the white stones would not be surrounded), and the group of white stones is safe.

This comes naturally out of the rules, and it won’t change because of AlphaGo, but the use of metaphor in Go is extensive. There’s a “bamboo joint,” a “mouth shape,” and a “ladder” structure, too, in which one player chases the other across the board. Traditional wisdom says that the ladder is certain death for the chased player, but apparently this isn’t always the case—in a professional match in 2003, Lee Sedol famously played out a “broken ladder” to his own benefit.

Go is a game with a well-established knowledge base that pros occasionally buck with a particularly inspired move, but Google’s AlphaGo program doesn’t have to deal with a thousand years of books and metaphors and mentorship—it learned by playing against itself.

On Wednesday night, in the second of five matches, Google’s AlphaGo beat World Champion Go player Lee Sedol for a second time. His confidence going into the series had waned, and after this second loss, Lee said, “Yesterday, I was surprised, but today, more than that, I’m speechless… there was not a moment in time where I felt that I was leading the game.”

Unable to fit AlphaGo’s moves into familiar patterns, Lee was prohibited from reading his opponent on and off the board. The 37th move of the game, AlphaGo played at space O10. Commentator and professional Go player Michael Redmond noticed the stone, raised an eyebrow, and did a double take. “That’s a very surprising move,” he said, “I don’t really know if it’s a good or bad move.”

Right after AlphaGo played at O10, Lee Sedol left the room for five minutes. When he came back, he spent 10 more minutes scrutinizing the board before playing again. The commentators spent several more minutes describing the move and trying to fit it into a “style” of play, but AlphaGo has been described in turns as “aggressive” and “conservative,” and its moves defy this categorization.

These matches are dramatic in their play, in what they mean for machine learning and artificial intelligence, but also in what they mean for Go. Black 37 in the second game wasn’t the ear-reddening move, and none of these games will take on the ghostly mythology of the blood-vomiting game, but they are part of the long history of Go. As we develop artificial intelligence that doesn’t need metaphors and stories to simplify their data, we may begin to look at our world champions differently and compare our timelines of practice and learning unfavorably to those of these new programs.

For now, take solace in the fact that Sedol was finally able to beat AlphaGo in their fourth match in this best-of-five competition. Not all is lost to the machines yet. The fifth match will be played tomorrow, Tuesday, March 15th.