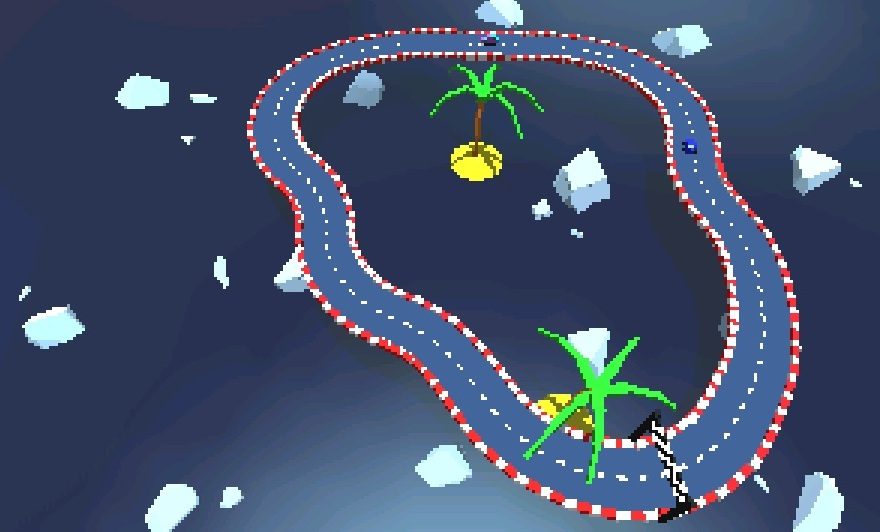 Some racing games want hyperrealism, providing rumbled feedback to let the player know when to switch gears, recreating skidmarks on real race tracks, and giving a view from the inside where you can see all the gauges twitch. Robber Docks’s new game, Kaasua, is not one of those games, which is exactly what makes it so delightful.

In Kaasua there is only one button: the go button. You can assign any button on your keyboard to fill this role, allowing the player to easily accommodate the controls for just themselves, or up to seven others playing on the same keyboard. You don’t need to steer, the car does that for you. Instead of steering, you must carefully and constantly calculate your speed to deal with a track that is constantly wiggling and wobbling under and away from you.

every slight increase in speed is exponentially more dangerous

The wobbly track allows the game to strip down racing to its simplest motivation, “get around fast,” without being boring. The single button controls are similar to the racing mini game “Slot Car Derby” featured in both Mario Party (1998) and Mario Party 2 (1999). However, in Mario Party, if you went too fast you’d spin out, allowing others to get ahead of you. The game could be mastered by determining how fast you could go without losing control. With an ever-squirming track, Kaasua prevents this quick expertise.

Even if you understand the controls, the track may still quickly worm it’s way out from right under your car. The goal, of course, is still to go the fastest around the track. But the random twitches and wobbles of the track make your speed an even greater matter of risk and reward than is usual in racing games. With a constantly changing track, and no option to slam on the brakes, every slight increase in speed is exponentially more dangerous.

The unpredictable movements of the track also make Kaasua a unique take on competitive racing. The players aren’t just trying to beat each other, but also the track. When all the players can similarly be thwarted by one swift shift of the road, they have a common enemy in the game. Like the bright visuals and the upbeat music, this reinforces that the competition is meant to be more friendly than aggressive. While the first few plays may be mechanically surprising, Kaasua is easy to pick up, and delightful in it’s simplicity.

Take Kaasua for a spin here.