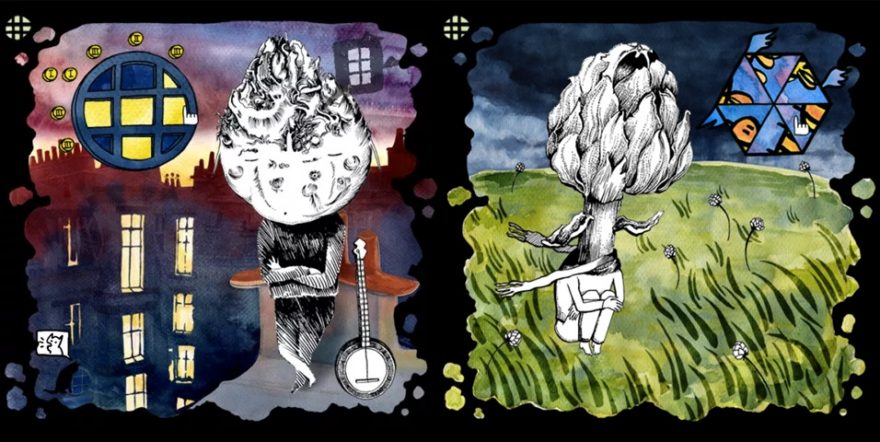 Have you ever bought a piece of food and for whatever reason left it out or forgot about it? After some time it begins to rot, dry out, or expire. Most of us would simply throw it away, but Agata Nawrot did something different: instead of tossing the spoiled food away, she was inspired to create Karambola—a strange and beautiful game about lonely fruit people.

“I like strange concepts,” Nawrot told me. A village of emotional fruit people who are kidnapped by evil, magical birds certainly qualifies as a bit strange. The idea came from a single bulb of dry fennel that she purchased in an effort to eat healthier, but never used it. It got dry and started to look “sad” according to Nawrot.

“I imagined it must feel really useless,” she continued. “ I was quite depressed at the time and identified with it. So I started drawing these sad veggies and fruits.” Eventually these drawings began to form a story. Initially, Nawrot thought of turning it into a book, but opted to create a videogame instead.

Nawrot has created Karambola almost completely by herself—for the music and sound she enlisted the help of a few friends. It hasn’t been an easy process given that this is the first game she has ever worked on. Nawrot had to learn how to program, animate, and work with music and sound effects, bringing it all together to create a cohesive and interactive world. But the struggle had led to many positive effects. “Making Karambola was an adventure for me that helped me deal with the same stuff that our fruit people are going through,” Nawrot said.

Karambola itself is inspired by the point-and-click classics Nawrot loved when she was younger. Games like Grim Fandango (1998) and The Curse of Monkey Island (1997). And like those games, Karambola asks you to solve puzzles, but not ones that are as obtuse or difficult as those found in older adventure games. It’s a pleasant mix of straightforward puzzles, like having to correctly arrange pieces in an image, as well as less obvious puzzles, like having to play a musical instrument guided by small markings subtly placed on a tree.

When you’re not wrapped up in the puzzles, Karambola‘s art should hold your attention—colorful, naturalistic environments inhabited by black and white characters. The contrast is a big part of the game. “The fruit people don’t realize they are really in a beautiful world, because they’re stuck in their thoughts,” explained Nawrot. Solving each puzzle helps free the fruit people and brings them one step closer to reuniting with their friends.

Nawrot hopes that Karambola will move beyond mere entertainment and “help all the lonely souls feel a little less alone.” It seems that making it has helped her get through a period of loneliness himself. “My dream is that the game will be heart lifting for those people dealing with loneliness or depression,” she said. It’s why the game is available for free to everyone who might need it.

Karambola is free and can be played on PC, phones, or tablets. You can also follow Karambola on Facebook.