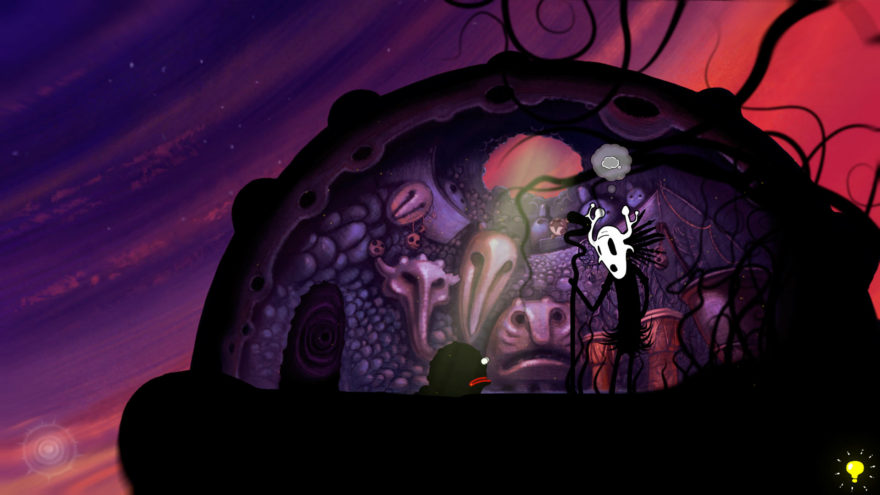 In AuraLab’s Karma. Incarnation 1, I’m controlling Pip. Or rather, I’m directing Pip along his journey. Pip is a worm-like creature, but he wasn’t always that way. Once upon a time, he was merely a lost soul. After his lover gets captured by an elusive Unknown Evil, Pip ventures off alone into a surreal world to get her back. But then he’s reincarnated accidentally as a worm, not a dragon as originally planned. And now here we are, Pip and I, bargaining with a dancing creature to trade a flower lei for the snowflake-encrusted light bulb I need that’s hanging on his gold chain.

Meshes the vibrancy of psychedelia with the dreamlike nature of surrealism

This is familiar point-and-click adventure fare. Solving puzzles, navigating dialogue with characters (or in this case, animated wordless thought bubbles), and clicking my way through an environment. Except in Karma. Incarnation 1, the art style takes a turn for the bizarre. Meshing the vibrancy of psychedelia with the dreamlike nature of the 1920s art movement that birthed Salvador Dalí, Karma. Incarnation 1 implements an unmatched visual style that seamlessly couples the best of psychedelia and surrealism. The game’s backgrounds remain stationary, often eerie works of art in their own right. But Pip is lucked with the ability to see the world around him in a new light, to see the unseen. Or, rather, with a new hue of vibrant color.

Karma. Incarnation 1 is not merely an exercise in excellent art design. It also wrestles with the complexity of morality—where Pip can interact with the other creatures he comes across in a positive way, or in an inherently evil way. How Pip interacts with others changes both the outcome of the game and his own appearance. Unfortunately, the game doesn’t give many cues as to what’s the right way to act (which may be closer to actual nefarious morality). But at the very least, I think I’ve been playing Pip as a Kind Worm Boy. Or, I hope I am.

Surrealism, as I once wrote when describing the upcoming game Figment, is the “illogical illustration of one’s dreams.” The well-known art movement of the 1920s was home to famous artists like Max Ernst, Giorgio de Chirico, and Dalí, of course. Fittingly, the dreamlike world in Karma. Incarnation 1 is as illogical as can get. None of the creature’s in Pips bizarro land speak any language. All interactions are resigned to incoherent gibberish, with illustrated animations to show the impossible words they’re spewing out. It makes the morality kerfuffles—or karma, I guess—increasingly harder to navigate. But in the end, perhaps that’s the point.