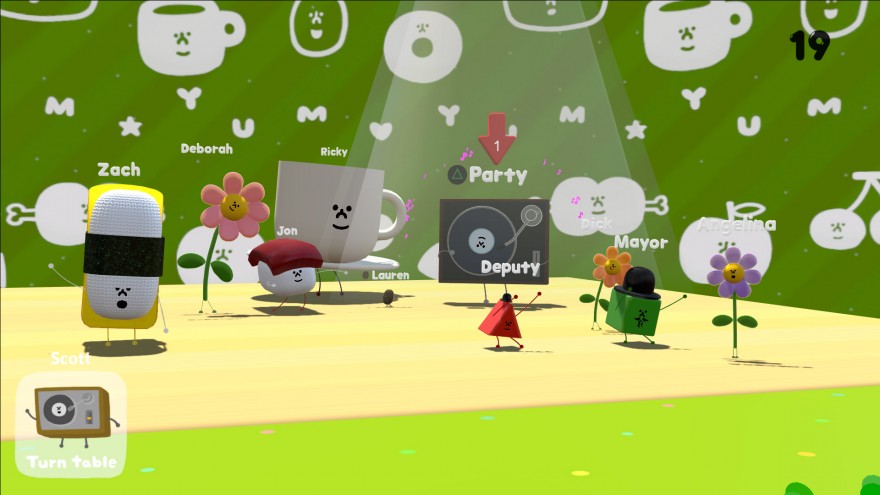 While members of the press struggle to properly label Wattam (is it a puzzle game? A sandbox? A friendship simulator?), the latest trailer only continues to defy all categorization and genre. If you haven’t played on of Keita Takahashi’s games before then you haven’t seen a game quite like Wattam, and that’s only one of its extraordinary qualities.

Co-founded by ex-thatgamecompany (Journey) producer Robin Hunickie, and famed Katamri Damacy creator Keita Takahashi, Funomena game studio is creating a playground that unlocks only through friendship, experimentation, and explosions. Hidden beneath Wattam‘s happy-go-lucky exterior lies a story world of unexpected tragedy. “After a series of unfortunate events,” the creators explain on the PlayStation blog, “there was a gigantic explosion which spread the people of Wattam all across the galaxy. As a result of this crazy BOOM, only a few people, a few pieces of world, and the Mayor are left when you begin the game.”

The poor citizens of Wattam find themselves lost in space and searching for their home following the calamitous explosion. Only you, the Mayor, can help coax each of them out of hiding or their slumber. Whether it’s a donut or a toilet, each character possesses their own special interaction that, when combined with others by means of holding hands, unlocks even more characters. Of course, you can only restore the world of Wattam and its characters to their former adorableness with the promise of fun. So the more friends you connect then the more willing others will be to join the party. “By building crazy chains and stacks [of characters], and then blowing them up, you will fill the sky with joy,” the creators say.

The boulder hat-wearing, trigger-happy Mayor—already featured in the reveal trailer—returns with more of his maniacally cheerful antics in this latest video. Through a combination of wacky rules and rewarding experimentation, Funomera appears to be a digital play space that encourages a mentality summed by up a question: “why the hell not?”. At one point in the trailer, in the midst of a seizure-enducing celebration between a coffee cup and a piece of sashimi, the plucky cube of a Mayor decides to eat an apple named Ted. For one horrifying moment, you believe this world has taken a grimmer turn. Then, the option to “poop” comes up. And, of course, Ted is resurrected as an adorable pile of poop. Ah, the circle of life. Isn’t it beautiful?

For now, Wattam is a PS4 exclusive and there’s no release date as of yet. To keep updated on its progress, follow Funomena’s Twitter.