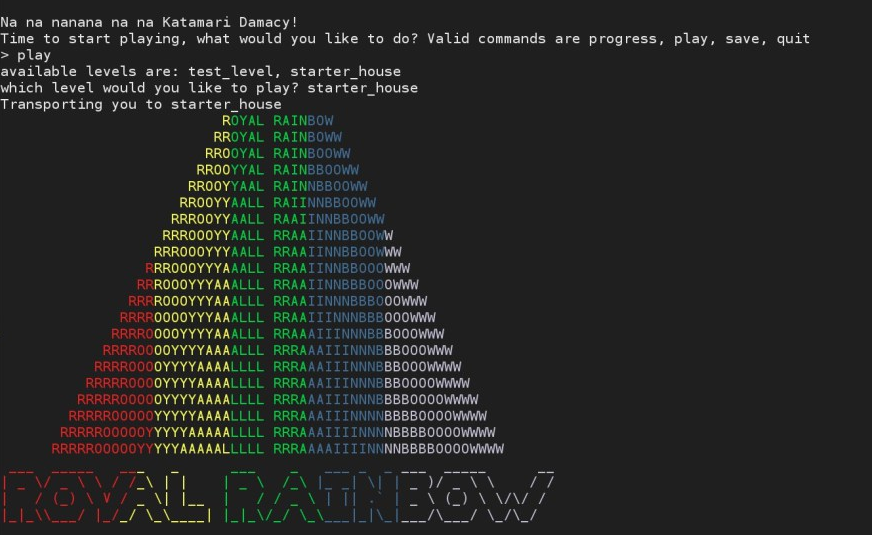 Game designer Keita Takahashi’s Katamari Damacy (2004) is easily one of the most charming videogames of all-time. It had a silly premise, a colorful aesthetic, and a grin-inducing soundtrack. Katamari Damacy was like no other game in existence. An underrated aspect of it, though, is its whip-smart writing.

From the bizarre story of the King of All Cosmos knocking out all of the stars in the sky after a drunken binge, to the descriptions of all the mundane items the Prince’s magical ball rolls up on Earth, Katamari Damacy’s quirky writing embellished everything else that made the game so notable. For the San Francisco Stupid Hackathon, one code-savvy man decided to de-make the game into a text adventure, eliminating virtually everything else pleasant about Katamari — leaving just its writing.

Noah Swartz, creator of Katamari Adventure, is a staff technologist for the Electronic Frontier Foundation. And in his spare time, a prolific github-er. He was inspired for this zany Stupid Hackathon project by an old post buried in the most arbitrary of places: a 2005 blog post from a Katamari Damacy LiveJournal fan community. The original blog post’s text-adventure take on the game is tongue-in-cheek. Much like an old text adventure, full phrases are necessary in order for the Katamari to roll over it (such as “paper clip” instead of “clip”). And in the end, the King of All Cosmos is still unsatisfied, and you’re doomed with a low score.

Katamari Adventure eliminates virtually everything else pleasant about Katamari

Swartz’s fully-fledged text adventure adaptation is more rounded than its LiveJournal-bound predecessor. The game has two playable levels (a test level and the primary “starter_house”). Dozens of items can be rolled into your text-driven Katamari ball: erasers, screws, mahjong tiles, and frogs galore. The item descriptions lift directly from the game it was inspired by, such as a banana described as, “You don’t need to be a monkey to eat this” or an ominous red crayon’s warning, “This is not lipstick. Girls, be careful.”

The “Stupid Shit That No One Needs And Terrible Ideas” Hackathon (shortened to Stupid Hackathon) has long birthed tremendously idiotic tech projects, a text-based Katamari Damacy game is probably one of the least stupid of them all. The dumb-minded hackathon began in New York, and has since spawned in San Francisco, Toronto, and even Berlin.

You can download and play Swartz’s Katamari Adventure here, off his github.