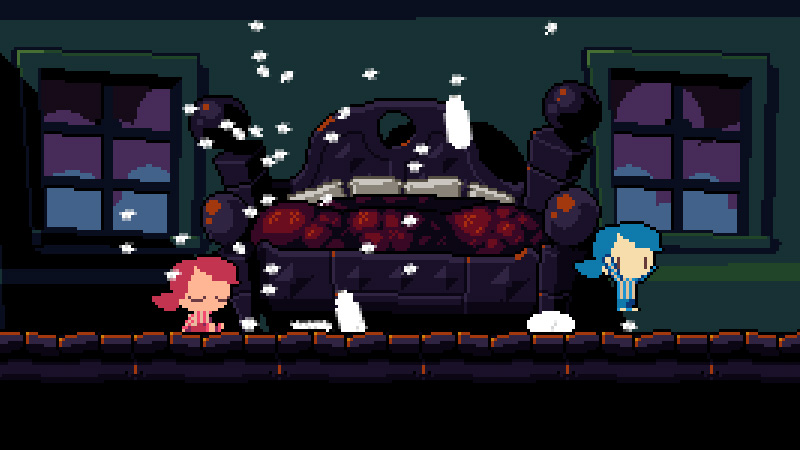 You square off against your enemy, weapon in hand and pigtails tightly fastened. The battle has been an arduous one and you’re having trouble seeing straight. But the grip on your pillow never once loosened. Because what’s at stake is endlessly more precious than all the gold, land, money, and power that’s been won over every previous war in human history before this one. The pillow fight must be won: for the sake of your honor and snoozing rights.

Will Blanton‘s Ludum Dare 32 game jam entry BED?HOGG doesn’t shy away from the high stakes nature of sleepovers. This game knows that after the bedtime snacks have been eaten and the gossip exchanged, the real fight begins. Your arena is preset, the too-tiny twin or full sized bed always just small enough to not comfortably fit the number of sleepover participants. The game of bed hogging is a battle of the wills and wits. Whoever holds their position best wins, whether through gridlocking prime bed real estate, or craftily maneuvering pillows around the person occupying said prime bed real estate until they relinquish their gridlock.

As the mimicry in the name suggests, BED?HOGG mimics the fencing battles of Nidhogg, only with less blood and more down feathers. Made in under 48 hours, however, it simplifies the fight to a single screen. Adhering to the game jam theme “unconventional weapon,” BED?HOGG allows for three different kinds of pillow moves, consisting of a regular, charged, or long-ranged blow.

Though the general fun of Nighogg lives on in this makeover, the tension is admittedly altered. Because of the lack of instant death, my tactic in BED?HOGG tended to disintegrate into something of a slap fight but with pillows, my opponent and I inching toward each other with weapons brandished and swinging feebly.

a slap fight but with pillows

Yet ninja moves—like counter jumping only to hit your opponent right in in the backside—can feel just as badass as the elegant fencing dance of the original game. But, unlike Nidhogg, the purpose for your battle strikes a more personal chord. Instead of the abstract threat of a large worm monster, the defeated bed hogger must “move over,” while the winner tastes the sweetest victory of all: some decent sleeping space.

You can play BED?HOGG for free on your browser now. Currently, there is only a one player mode, but two player is coming soon. There’s no word of what other types of improvements the game will see in its post-jam update, but you can keep on to date through the creator’s Twitter.