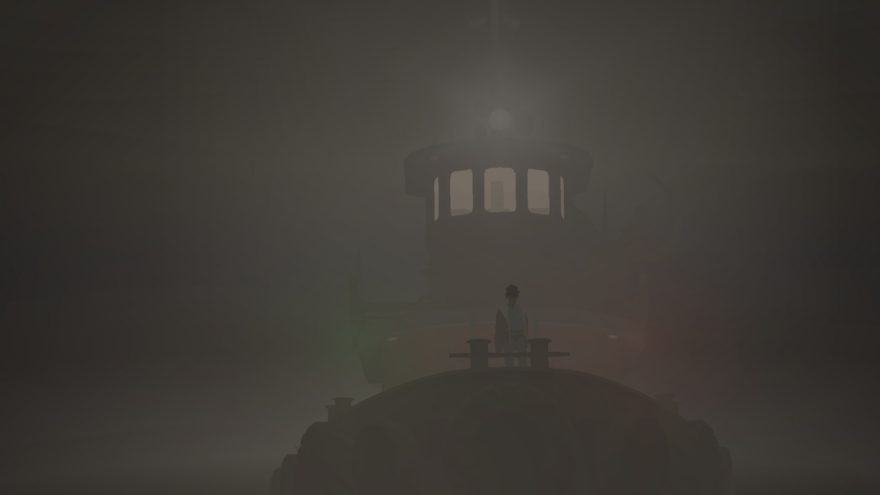 Michael Snow’s 1967 experimental film Wavelength is a 45-minute long zoom on an empty room. Outside the walls, and the camera’s frame, the insignificant dramas of human life play out in sad, abortive spirals. Men move furniture into the room; two friends drink and listen to the Beatles; in the end, a man dies on the floor and a woman calmly informs the cops of his corpse.

Snow is monomaniacally committed to his premise: Wavelength is a canonical example of experimental film precisely because of its push-pull between dry, structural formalism and gut-level intrigue. In a way it’s a murder mystery, but one so perversely oblique that it’s nearly drained of mystery at all. Instead we watch the mundanity of everyday existence through a fixed lens, our voyeuristic gaze leaving space for ambiguity, contemplation, disgust, and no small amount of boredom.

Kentucky Route Zero is not merely about drifters, relics, and outcasts

Cardboard Computer’s Kentucky Route Zero has pulled several such feats of watching over its years-long lifespan. A five-part drama that’s equal parts magical realism and Southern Gothic, it’s been doled out act-by-act at a painfully slow pace since 2013. That pace, nonetheless, seems snugly of a piece with the bewildering brilliance it deigns to reveal a little more of every so often. It is not merely about drifters, relics, and outcasts; it drifts itself, and its distance from the pulse of popular culture is impressively vast.

With characteristic nonchalance, Cardboard Computer dropped Act IV on July 19th. There was zero fanfare: it was simply not there one moment, and the next, it was accessible from the game’s resolutely spartan menus. It’s emblematic of the game’s tone overall, which spikes absurdism with dry wit and careful doses of wounding sentimentality, deployed the way William Faulkner or Flannery O’Connor would loose sudden savage violence into the bowels of their fiction.

To wit: Act IV begins with Will, a new addition to the cast, attempting to figure out how to repair a massive mechanical mammoth that sits abreast his steamboat’s bow. The android musician Junebug joins him on the deck as he pores over the mammoth’s manual, and they briefly discuss their journey down the subterranean Echo River.

“Some nights I remember a place, but it’s full of strange new people,” Will says. “And some nights I meet an old friend on an unfamiliar shore. I wonder which kind of night this is.” Later, he says: “I listen to the river’s stories, and my own stories get fainter and fainter.” The game handles these moments of folksy philosophy with the same surety that it handles non sequiturs about bats with “white nose syndrome,” the use of certain herbal teas to lessen the pain of childbirth, or the overarching theme—if you can call it that for its light-footedness—of debt.

Way back in Act I, our protagonist appeared to be shit-luck truck driver Conway, who finds himself forced to take Route Zero to finish his deliveries. Route Zero is a road of unknown provenance: the sections where you drive around to different locations are even rendered in a barely-there latticework of wireframes, as if Conway has found his way into a place where the world has yet to finish knitting itself together, and the boundaries between reality and everything outside are thin as spiderwebs. But Conway’s bum leg and entanglement with a shady firm of glowing skeletons who strong-arm him into delivering their own goods have become but one note in an ever-growing chorus. Act II introduced Ezra, whose brother Julian is a massive eagle, and Act III gave us the androids Junebug and Johnny, among others.

Route Zero is a road of unknown provenance

Junebug stands out because of the visceral power of a scene where she performs a song at a bar called the Lower Depths. As Junebug’s wrenching, inhuman warble spools out the words of your choosing, the club around her peels away to reveal the moon and stars sparkling above. The camera begins to slowly, slowly pan back and forth; Junebug sways to the insistent, pulsing beat. And then the roof drifts back down onto the club, piece by piece. like dropped scraps of paper, and celestial incandescence is replaced by flickering florescent lights and the hum of shitty wiring. There is no moment like this in Act IV. Instead, Act IV is humbler, content with formal elegance and the simple pleasure of moving our protagonists’ stories forward.

From the get-go, the cinematography shows new confidence. The scenes aboard the boat, the Mucky Mammoth, pan and track along its interior and exterior in ways that feel substantively, technologically new for Kentucky Route Zero. A later scene where Ezra and the boat’s captain Cate pick mushrooms on a small underground island of cypress trees experiments with pairing a long shot and dual strands of prose—they both describe the characters’ actions and relay hazy memories. That the appearance of a derelict Civil War ship called the Iron Pariah, full of wailing cats, drifting huge and silhouetted past the camera feels not like an intrusion but the scene’s natural emotional peak is proof enough that Cardboard Computer really fucking know what they’re doing.

But do we know what they’re doing? And do we need to? Kentucky Route Zero has always skirted the boundaries of surrealism-for-surrealism’s-sake, but grounded itself early on with a focus on the physical and mental tolls of debt and poverty. We watch these characters navigate the pitted wreckage of their lives, our decisions meant not to guide their actions but to illuminate them as people. “What do you want to know?” the game asks, and lets you answer.

There are several points in Act IV where you explicitly have to decide to keep digging. Conway’s travel companion Shannon finds a stash of increasingly bizarre VHS tapes aboard the Mammoth. If you watch them, you watch her sitting in a chair, watching them. You can watch as many as you want, or none at all. Some are inexplicable; some are boring as shit. One appears to explicitly reference Wavelength.

Later, a character checks his answering machine. Again you can opt to listen to every last inane message. In a narratively adventurous interlude, you comb through surveillance footage of the protagonists from some time in the future. These are not grave moral choices; they are an invitation to empathize, to uncover some small hard fragment of someone’s life.

The game’s dialogue options have always been in the third-person, distancing us from the speaker, but more and more Kentucky Route Zero impresses that we don’t really know its cast of characters. Even they are becoming strangers to themselves: “I can’t feel at home in this world any more,” goes one song by the game’s recurring troubadours/Greek chorus, the Bedquilt Ramblers. Conway, once the focus of this story, becomes unknowable—we play largely from the perspective of his companions, and his behavior is erratic and worrying. While watching a theremin virtuoso named Clara (like Conway, her name is an uncharacteristically direct allusion), you sift through a conversation between Johnny and Junebug, entwined with memories from the last time they watched Clara play. In ghostly italics, one line stands out: “That’s the thing about the theremin—it’s the only instrument you never touch.”

From the room of VHS tapes, to the security footage, to the bat sanctuary, to the theremin performance, to the camera’s final, extended retreat up the rickety helix of a spiral staircase; Act IV confronts us with scenarios that test and limit our perception. Like Snow’s Wavelength, it gives us just enough to trick us into feeling like we’ve glimpsed something real.