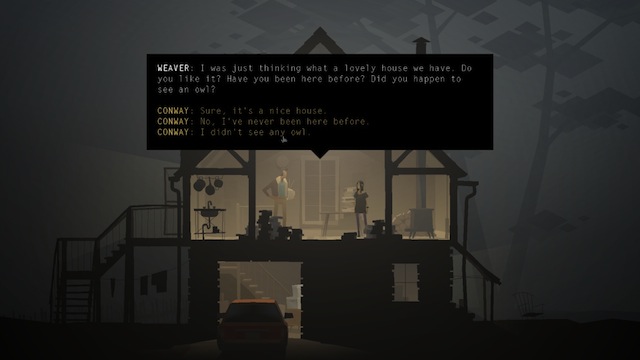 Jake Elliot and Tamas Kemenczy of Cardboard Computer have been releasing curious little metafictional artifacts between each episode of Kentucky Route Zero, their ongoing saga about Baptist churches, coal mines, and hills. This time it’s in the form of The Entertainment, a southern gothic high school play for the Oculus Rift, seriously. It’s ostensively written in 1973 by Lem Doolittle, a clearly fictitious playwright, although you can purchase the transcript by way of Lulu for $4.50.

And get this. You play as a character with a non-speaking role in the play. You just sit there, while other actors gab at the bar about hard times. The proud owner of a virtual reality headset can pivot their head to see the audience watching patiently.

This seems to be a joke or satire along the lines of The Stanley Parable on the part of Elliot and Kemenczy, questioning the not-so-interactive aspects of games. While definitely strange, the interlude makes sense, as Elliot has mentioned in an interview that he is exploring Kentucky Route Zero from the perspective of the setting rather than that of its characters. Perhaps his narrative solution is a better way to think of games: not from one perspective but from all of them.