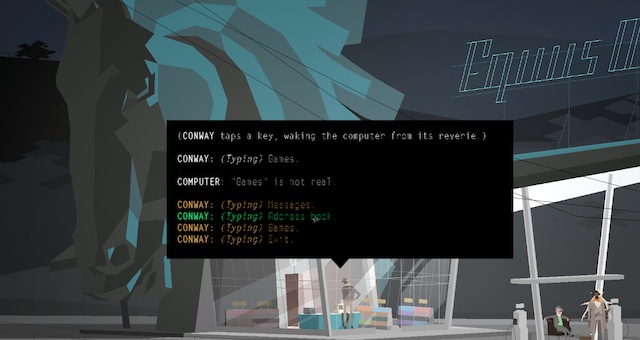 Interviews with Jake Elliot, one of the easygoing chaps behind the serene and magically-real adventure game Kentucky Route Zero, always prove enjoyable. And I’m not just saying that because I happened to interview him before either! It’s because Jake is a down to earth guy with a broad range of interests from literature to American theater to Chopin’s Études to abrasive, drony, slow-core noise music that he creates in his spare time. (He’s also done some web dev for us, but before he became a hotshot indie dev.)

In a low-key, contemplative interview over at Rock, Paper, Shotgun, Elliot revealed that his inspirations for the game include mid-century stage sets and a trip to Kentucky (where else?). But the connection that stood out for me was with literature of the Southern persuasion.

Another big source for us, particularly in the writing, has been Southern Gothic fiction, like Tennessee Williams, Flannery O’Connor, and William Faulkner. A lot of that writing is in response to prejudices against people from the South in that era, from the ‘30s to the ‘50s or so. The characters in a Faulkner book are often pretty grotesque.

It’s great to think that a game might restore some legitimacy to the beleaguered literary genre, which has been dead to me, and anyone with a shred of decency, since after Anne Rice put the Goth into Southern Gothic. Kentucky Route Zero is totally staying away from vampires, which is a good thing.

Instead, Elliot, who created the game with Tamas Kemenczy, tackles the heavy themes of loss and financial ruin, a throughline of novels like The Sound and the Fury, though so far I haven’t ran into an equivalent of Benjy. He continues,

I guess at the core of it, it’s about different ways that people deal with hard times, and the different ways that economic downturns affect people who live at the margins, who are disempowered, and how they make use of those situations or how they deal with those situations. And also this idea of debt is a really central theme of it. How do people get into debt? What impacts does it have on their life?

Elliot’s Kentucky, a rural community latticed with byways and interstates, is a Kentucky in dire straights. The idea of world collapse, of clinging desperately to a way of life as it crumbles through your fingers, is not lost. You see it everywhere you look: in a rickety antebellum manor, an abandoned mine, a prosthetic limb factory, the ghostly remains of a Baptist church. It’s Souther Gothic in every aspect.

Well, except one. Where I come from, we consider Kentuckians Yankees.