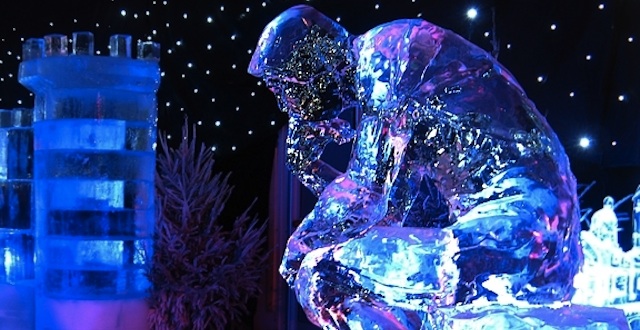 Some say the world will end in fire,
Some say in ice.
From what I’ve tasted of desire
I hold with those who favor fire.
But if it had to perish twice,
I think I know enough of hate
To say that for destruction ice
Is also great
And would suffice.
— Robert Frost

It’s telling that “Icing,” the practice of handing someone a bottle of Smirnoff Ice, and then having them get down on one knee to guzzle the thing, first gained popularity among high-powered New York investment bankers. Being Iced is, as Robert Frost eloquently reminds us, the inverse of being fired. If your boss calls you into his office and Ices you, chances are you’re keeping your job, although you have still been punished and humiliated.

Though in the summer of 2010 it held enough cultural capital to earn itself a poorly-researched New York Times trend piece, nobody Ices each other these days, because it’s dangerous and stupid and still illegal to publicly consume alcohol. But during the magical summer of 2010—the summer of Four Loko and the World Cup and Twitter—it wasn’t. Icing was live-action role-playing for the rest of us, a way for us to pretend to be wizards and shit. Or, y’know, make each other drink Smirnoff Ice.

Smirnoff Ice is strangely opaque; it looks like what would happen if you crushed up some Tylenol and mixed it with water, or maybe just semen. I am drinking one right now. It tastes like lemonade that has been left out in the sun. It does not contain very much alcohol. It is the Hall & Oates of premium malt beverages. It’s the most bullshit drink ever.

It is precisely because of this that Icing became a thing. Nobody likes to look dumb, and nobody likes being punished for doing nothing wrong. On the other hand, everyone loves doing these things to other people, because the internet has created a generation of sociopaths; and therefore, the internet created Icing. The game’s exact origin is hazy, but the accepted creation myth of Icing is as follows: Totally Awesome Bros at a Southern college start making each other drink Smirnoff Ice. This is hilarious because Smirnoff Ice sucks; and it trickles upward to stock brokers in New York, many of whom were ex-fraternity dudes. Around June 2010, Icing became a low-level cultural phenomenon, both on and off the ’net.

Icing managed to transcend “stupid drinking game” status into something more, because it quickly developed the sort of hyper-involved metagame more often reserved for the likes of Magic: the Gathering, or Humans vs. Zombies. Indeed, without really trying to, Icing nicks key elements from each of these games. There was the strategic accruing of Ice for your stash, reminiscent of a drunken, Lacoste-wearing version of deck building in Magic; and then the was the anything-can-happen, oh-Jesus-I-have-to-watch-my-ass-at-all-times paranoia that comes with HvZ. Instead of the traditional “deck,” though, a well-prepared Icer had an arsenal. Mine was held in my underwear drawer, and consisted of roughly 20 12-ounce Ices—the standard-issue Ice size, perfectly for hiding in weird places and forcing people to drink when they least expect it.

The sneak attack was undefendable. Places my friends and I got Iced like this include the bottom of my laundry bag, a Nalgene bottle, and in a rare conflation of stupid drinking games, the top of a “wizard staff.” However, these bad boys paled in comparison to the silver bullet, the 22-ounce Ice. While you couldn’t wedge one into a Nalgene, they were perfect ammo for the Direct Hit, where you simply presented someone with an Ice and they had to take a knee and chug. One could not commit an Ice Block—where you force your attacker to drink by shoving an Ice right back in their face—against a 22 with a 12-ouncer. Such an Ice-assination could only be thwarted with another 22; and unless you had a fanny pack or cargo shorts or something, there was no way you could keep such heavy artillery on your person.

Icing, obviously, is not the world’s first overly involved drinking game. The ancient Greeks played a game that involved spitting the dregs of wine at things, and being forced to drink if you didn’t hit your target. On a scale from “one” to “bro,” that sounds “pretty bro.” Ancient China managed to outdo Greece, however, by incorporating referees into their drinking games to make sure people followed the rules and didn’t get in fights. Take that, Greece! Drinking games as we know them originated in the ’50s at fraternities, because of course they did. We’re talking Beer Pong. Circle of Death. Flip Cup. The good shit.

And just as frats taught us all about the transcendent joy of throwing ping-pong balls into cups of beer and accidentally giving everyone on your freshman hall mouth herpes via not washing the cups for an entire semester, fraternities brought us Icing.

At the same time, Icing has roots in activities like “the circle game”—pain-based games that tend to bubble up from “the folk.” In “the circle game,” the goal is to trick your friend into looking at a circle that you’ve made with your thumb and index finger, and then punch them. Add in alcohol and dumb, dumb mythology, and that’s basically Icing.

At the time of the Ice storm, it was widely speculated that Smirnoff was behind the campaign—people who usually didn’t buy the Ice were now buying the Ice, and from a strictly numbers standpoint, that’s a good thing. By July 2010, it turned out that a) Smirnoff was not behind Icing, and b) everyone realized that Smirnoff Ice is fucking disgusting and there was no point in drinking it, or even making other people drink it.

Now that the Ice has melted, it’s interesting to look back on the trend and ask ourselves what it actually all “meant.” To some, it was a testament to the power of the internet and accidental viral marketing, as the trend was spread through Twitter and the now-defunct website Bros Icing Bros. To others, it was an excuse to drink during the day. That was certainly part of its appeal. However, was it also something more? When Bros Iced Bros, they tacitly accepted geekdom. Did Bros realize that they were taking on the mindset of a Magic player? Was Icing just one more weird embodiment of the impulse that exists in all of us, the need for a comprehensively escapist sub-lifestyle that drives people to become Juggalos or golfers or get super into knitting? Whatever the reason, for a summer were we all nerds.

About a month ago, I was visiting North Carolina for a friend’s birthday. Our old roommate showed up to the party, sporting a not-insubstantial bulge in his jacket. He produced an Ice; and for a moment, I thought that once again, the game was afoot. He even tried to Ice my friend. But in a show of solidarity, about four of us took a knee and helped our friend chug. The game was over. Somehow, we’d all lost.