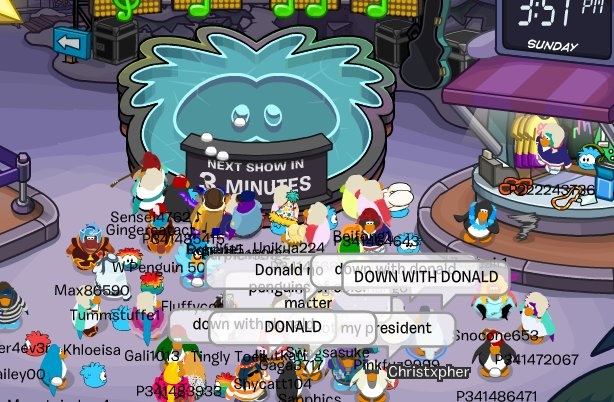 As an American college student, I’m no stranger to protests. In the past month, I’ve attended roughly two or three per week regarding issues like health care, systematic racism, discrimination against undocumented students, and most recently, our president-elect.

After the election on November 8th, protests immediately began appearing all over the country. In Boston, thousands took to the street the very next day. Going out to march in crowds filled with signs saying things like “not my president” and “I’m with her” is one way to exercise freedom of speech and express dissatisfaction, but not always the safest. With these gatherings escalating and causing property damage, and arrests being made with the use of pepper spray, political protests aren’t exactly family-friendly events.

However, Club Penguin users have shown us that there’s more than one way to protest. The site was created in 2005 as a virtual world where kids can play games and interact with one another. In days following the election, flocks of penguins gathered online to voice their opposition to Trump. Many of the statements typed in the online protest were the same as the ones chanted on the street, though others had some alterations; penguins were spotted saying “my penguin, my choice” and “penguins of color matter.” While some find these social justice penguins nothing more than amusing, the site allowed children, who have a huge stake in political matters despite their inability to vote, to engage in political speech in a relatively safe space that is designed specifically for them. They are able to experiment with political thought with people their own age, and they can feel like their voices and ideas are just as valid as anyone else’s.

In this way, Club Penguin serves as an example of how virtual worlds and MMOs can function as accessible mediums for political discourse. In reality, street protests aren’t for everyone. One person might have a physical disability that prevents them from marching for miles, and another may have a mental health issues that prevents them from joining large, loud crowds. As mentioned earlier, such spaces are not always ideal for children either. Beyond that, many people simply aren’t comfortable with the dangers associated with protesting. Virtual worlds that allow large numbers of players to interact with each other, like World of Warcraft (2004), Guild Wars (2005), and of course Club Penguin, are spaces that allow communities to engage in relevant political dialogue without the physical risks and stresses of a street protest.

If kids can stage an organized political act on Club Penguin, then similar acts could be staged in different virtual worlds. While social media like Twitter and Facebook might be more common and sometimes reach a wider audience when used to broadcast political sentiments, there is still great significance to be found in what’s happening on Club Penguin. This unique form of protest has accomplished what most protests hope to do: gain national attention. Buzzfeed, hugely popular, wrote a piece about it, and NPR published a more formal article about it three days later.

But the significance is also in how Club Penguin members function as a community. Not all the penguins online are Clinton supporters, meaning that this political act is an opportunity to spark discussion between members. People frequently make friends online through gaming, doing things like going on raids together, or in this instance, playing minigames. MMOs aren’t just for entertainment; they provide personal connections as well, meaning that political statements in these communities can have a personal impact. Much like a protest against economic injustice outside my dorm pushes me to re-examine my beliefs and discuss them with my peers, a protest in an online community exposes those users to the beliefs and real-world experiences of people all over the world that they play alongside in a virtual space.

a new take on what online activism can look like

Of course, this is not to say that MMOs are the ideal medium for political discourse. By nature, they do offer physical safety, or at least the absence of physical danger, to their users. However, they are not all as hyper-accessible as Club Penguin, which allows anyone with an email address to participate. Hefty membership fees like those charged for World of Warcraft make some of these virtual spaces economically inaccessible for a lot of folks, and hate speech runs rampant in these spaces as well. Club Penguin has the benefit of being designed for kids, thus preventing a lot of vulgar and discriminatory language from being circulated in-game.

Despite some barriers to political dialogue in online spaces, these virtual penguins have offered us a new take on what online activism can look like.