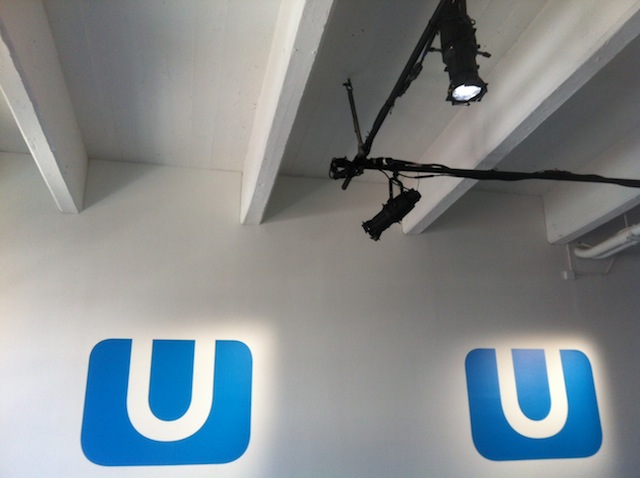 Three pieces of hard news emerged from Nintendo’s Wii U event in New York today, and you probably already know them: one, the system releases on November 18, two, it will cost either 300 or 350 bucks, and three, it will include an entertainment management center called Nintendo TVii. We were there, and here is what we saw, heard, smelled and ate:

– Nintendo held the opening speech on the fourth floor of the 548 space on 22nd street in heart of gallery Chelsea, and there was much panting to be heard among game journos at the top of the stairwell. We were consoled with bottles of water from Dean and Deluca. The Dan Flavin light installation that lines the white brick and concrete stairwell shone a soft Nintendo blue, but this was scant preparation for the irradiated-neon-hyper-fucking-Nintendo-blue of the auditorium where the speechifying took place. It was like being in a club in a Hype Williams video.

– They are calling the rollout of the console the Wii U Experience, and I think someone should be sent to Jimi Hendrix’s grave to confirm the fact that he has rolled over in it.

– People hooted and hollered in appreciation when Nintendo of America CEO Reggie Fils-Aime walked out onto the stage, for reasons that are opaque to me, but may have something to do with the fact that he looks and moves exactly like a football coach, a hulking shuffler, a Mike Holmgren. He’s a big, demonstrative dude. One thing you may not know about functions like this is that the presenters read from a teleprompter, which feeds them not only the meat of their speech but also the interstitials, such as “thanks a million!” to a co-presenter leaving the stage.

– Super Mario is still the most fun game ever made.

– Award for the worst feature added to an extant game for its Wii U release: the introduction to Ninja Gaiden 3 of a chesty female ninja, whose introductory cutscene, I shit you not, starts with her receiving a topless massage in a Paris bathouse. Watching this at a Nintendo event made me feel like a dirty uncle at family Thanksgiving, and not in a good way. The Nintendo guy standing next to me said “she’s a lot better looking than Ryu, isn’t she”, and I backed away slowly.

– The Wii U gamepad, for those who have not held it, is a battleship. Playing FIFA with it is like trying to tie your shoes with a rock. It certainly adds interesting dimensions to FIFA, such as tapping players on the second screen to send them on a run, but I found it extremely difficult to keep track of two screens at once. I think anyone who was watching me from afar must have thought I was nodding “yes” very vigorously, a lot.

– It does allow you to do touch-screen drone strikes in Call of Duty 2 Black Ops. Activision publishing CEO Eric Hirshberg drew major laughs when he told the audience that we could “rain down an entire drone army on Singapore.”

– Dressed in black, middle-aged and bearded, the Activision Call of Duty guys looked like Hells Angels roadies at Fremont compared to the  young, chipper, bright-eyed Nintendans.

– For all of the extravagance, our favorite game at the event was Balloon Trip Breeze, a lark of a minigame in Nintendo Land, a launch-title grab-bag. In it, you control a little person strapped to some balloons by swiping a stylus on the second screen to create gusts of wind. It’s simple, addictive, adorable, and could be played by anyone. In other words, it was very Nintendo.