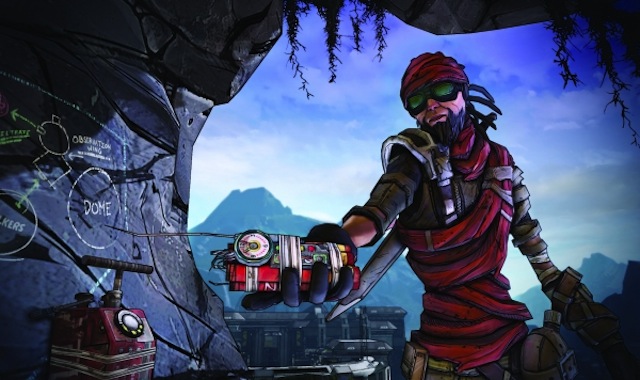 It was a late night on Staten Island. A still-shrinkwrapped copy of Borderlands 2 lay on the table. U-God was trying to hook up his special edition Wu-Tang: Shaolin Style controller to his Xbox 360, but he couldn’t figure out where to plug it in. As he finished his tenth blunt in as many hours, he gave up and picked up the controller that had come with his console. The Kinect thing lay in the corner, unused, unloved. It was not shaped like a W, either. U-God hated his Xbox 360.

Cappadonna had given him the game for his birthday. He looked at the packaging. There was an alien guy on the cover. He wondered if it was real. The RZA had mailed him an American Express gift card; Method Man had sent a nice text via iMessage. Everyone else in the Clan had forgotten his birthday, it seemed. Whatever, they’d remember once he beat them all at videogame stuff.

He fired up his Xbox and let the game load. As he zipped through the opening sequence, he felt his teeth with his tongue. He hadn’t brushed today; they felt like sweaters. In his haze, he savored them, realizing only after several minutes that it was time to choose a race. He decided to be Salvador. He was big. Strong. Appealing in ways that tapped into feelings that U-God had set aside many years ago. Plus he could hold two guns at once, which seemed important.

He found himself in a desolate, snowbound land, faced with a robot who called himself Claptrap. Even though he should have been faded enough off the ooh-wop to enjoy that mechanical god’s jokes, he couldn’t bring himself to laugh. It might have been the depression, or it might have been that the writing just wasn’t very funny. U-God wasn’t a teenager anymore. His teenager wasn’t a teenager anymore, either. Not liking the robot’s jokes made U-God feel old. He tried to shoot it out of spite; nothing happened.

Everyone in the Clan had forgotten his birthday. Whatever, they’d remember once he beat them all at videogame stuff.

The cell shading of the graphics was messing with his eyes. He kept getting attacked by these yeti-looking things, and he couldn’t seem to hit them. Bullets gone, with no new ammo in sight, U-God started punching the monsters in the face. This made him happy. He liked punching things.

He wanted to quit, but he had nothing else to do. He’d texted Ghost a while ago, but he’d been returning his texts less and less. Three hours later, he was in a town. He’d killed some more bad guys; they were humanoid this time. Were they bad at all? he wondered as he disposed of the last of the bunch. Or are they just shooting at me because I’m coming into their town with a gun?

He walked around looking for some rocks to smash, hoping there would be something in there to restore his health. The screen turned red. The controller vibrated, and U-God realized he was under attack. He had thirty seconds to kill his assailant dead before he himself would die, and as he turned around to punch his new worst enemy in the face, he caught one in the chest, steeled himself for a trip to the beyond, his seven brothers in the Wu (plus Cappa) as his pixilated pallbearers. But just as U-God figured he’d have to start the whole damn game over again, he fell into a wormhole and came out alive, a short ways away from where he’d met his demise. U-God realized he was locked in a time loop within the game. He’d never escape. He wanted to cry, but there was no one to cry to, in the game or in real life.

He was stuck. An endless feedback loop of life, and then death, and then revival. He would beat the game, eventually—the odds were on his side, with no doubt—but why should anyone care? As U-God wondered if this was a metaphor for his existence, he took a final pull from his blunt. He fell asleep, Borderlands 2 still running on the TV, doomed to a life of solitary confinement. It wasn’t self-imposed, but it might as well have been. U-God dreamt a dreamless sleep, waking up at 5am to check his phone. No messages.