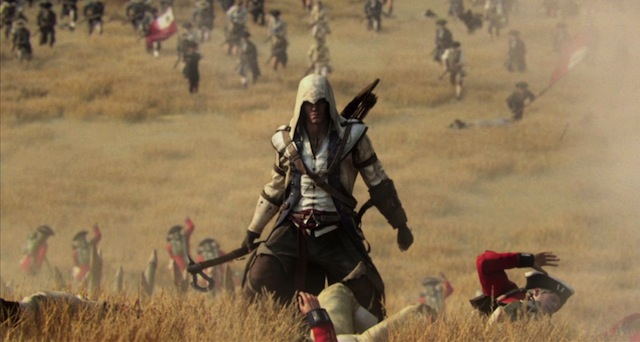 The protagonist of Assassin’s Creed 2, Ezio Auditore, was a flamboyant libertine before he was a killer. Because plot makes demands on the fun-loving, Ezio was forced to use his sneakery to imperil the jugular veins of the deserving, but you always got the sense he would rather use it to purloin a nice barolo and peer up the skirts of the Renaissance, blissfully undetected.

Ezio was a good time, and so was AC2. It had a light touch and a playful spirit, it was one of the best games of the past five years, and if Ubisoft had any sense, they would have made the entire series of games about their charming Florentine lecher. Never-ending series have been built on far less charismatic shoulders.

Instead, their ponderous new game, Assassin’s Creed 3, introduces a new hero, Connor Kenway, and a new setting, colonial America at the time of the Revolution. While Ezio primarily concerned himself with sinning, the people who came to the colonies primarily concerned themselves with sin: ways to avoid it, ways to decry it, ways to punish those who indulged in it. Indeed, not only do the characters in this game totally lack vice, they seem to have construed vice so broadly as to include smiling, laughing, and joke-telling. Everyone seems afraid of some ubiquitous and unseen morality police, ready to apply scarlet letters at the first sign of fun.

Connor, I’m sorry to say, is no exception. Much has been made of the fact that he is half Amerindian (real name: Ratonhnhaké:ton). As far as I know, nothing yet has been made of the fact that Connor’s personality type is also “Native American”, his ethnicity shorthand for characterization. He says “my people” a lot; he is punished for playing an innocent game of “Native American” hide-and-seek further away from his longhouse than is advisable by having to watch his village and mother burn; he sometimes becomes an eagle; etc. We know exactly what Ezio would do if he didn’t have to avenge his family. What the hell would Connor do if he had some spare time? Oh right, he’d show his bored friends how to hunt better. This is a guy who could use a game of life-or-death lacrosse and a couple few tokes from the peace pipe.

If only the illustrious colonists whom Connor comes to obey, for some reason, could also teach him something about living. Instead, Sam Adams is a pedantic shithead, Paul Revere is a bossy priss, Israel Putnam is a shouty jock, and so on. “Historical verisimilitude!”, you cry? Connor can swim for hours in the Massachusetts Bay in a snowstorm without freezing to death, I respond. It’s a videogame. It’s how people spend their leisure time and their money. Make it fun.

Instead, much of Assassin’s Creed 3 feels like a Puritan admonishment from Ubisoft for enjoying the Continental pleasures of AC2 too much. Oh, you loved clambering all over those Baroque and Gothic buildings, did you? Well, here’s a thousand two-level brick houses to help you temper those skyward impulses. Oh, you loved the operatic colors and textures of Italy? Why don’t you go have a timeout in some endless, empty woods? Oh, you liked the pithy dialog and colorful characters? Why, here’s another five-minute cut-scene full of speechifying by indistinguishable brown-haired white men! Better pay attention.

Connor is a guy who could use a game of life-or-death lacrosse and a couple few tokes from the peace pipe.

The going gets so slow in the introductory first SIX HOURS, in which you play as a jowly Englishman sneaking around ridiculously in a tricorner hat and pantaloons, that you actually long for Desmond, the taupe hero of the frame story that has never remotely justified its existence and which I will not stoop to explain. Early in the game, as Desmond, you scale a construction site spire and are rewarded with a glittering view of modern-day Manhattan. It’s a rare reminder of the joys of the older games in the series.

Look, these have never been perfect games, but Ezio and the great views made up for a lot. Assassin’s Creed 3’s austerity, its joylessness, wouldn’t feel so crushing if its fundamental flaw wasn’t still so apparent. AC3, like its predecessors, is still barely credible as a stealth game. You simply do not have sufficient control over Connor’s movement to make it so. The reason for this is the game’s climbing mechanic, which renders open navigation a pleasure but makes fine movement feel covered in Velcro. The game won’t stop going on about freedom, and yet your character, even in a huge open world, feels stuck, all the time.

The shadow of Red Dead Redemption looms long over this title. As a narrative of American origins, as an action game, as an open-world game, as as a tribute to natural beauty (and nothing in AC3 comes close to the moment in RDR when you cross into Mexico), as a vehicle for fun, Assassin’s Creed 3 shrivels next to Rockstar’s masterpiece. If, by some strange magic, Ezio Auditore da Firenze walked into my living room and asked me how to have a good time on these heretical screens and boxes of ours, I’d kick AC3 under the couch and hand him a copy of Red Dead with some simple advice: Go west, young man.