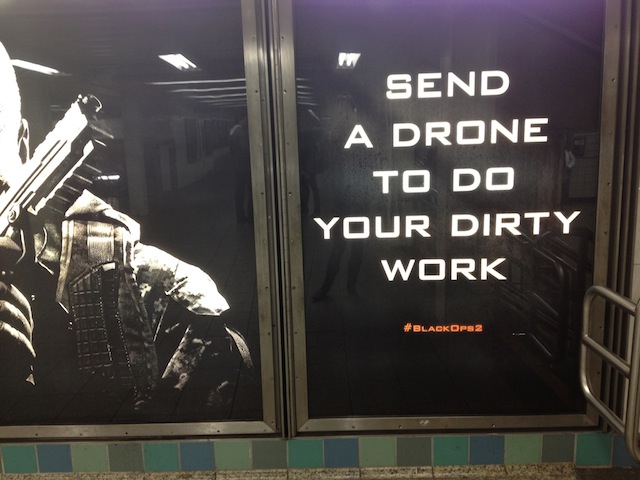 A double-pane ad for Call of Duty: Black Ops 2 in the New York subway reads simply, “Send a Drone to do your Dirty Work.” A joke.

A television commercial last year for Call of Duty: Modern Warfare 3 featured Avatar hunk Sam Worthington teaching Jonah Hill, the patron saint of the overfed, oververbal and underactive (the gamer) how to more effectively kill. Hill, in no time, is a killing machine. The ad, which was widely praised for its wit, featured a tagline at the end that read, simply, “There is a soldier in all of us.”

This ad was the successor to an ad for the first Black Ops, similar in tone, in which everyday Joes and Janes, dressed in their 9-5 biz-casual, blast carbines and RPGs and grenades in a cratered Middle Eastern city. The punchline to the joke is that Jimmy Kimmel and Kobe Bryant are also on the loose and out for blood.  There is a soldier in all of us, even the supremely talented and rich.

This year’s iteration stars Robert Downey, Jr. and was directed by Guy Ritchie, the faded aesthetician of ironic violence who was once married to Madonna.

Conscription in the United States ended in 1973. The Gulf War Did Not Take Place.

American drone aircraft have killed at least 1900 people in Pakistan, a country on which we have never declared war. Of those 1900, at least 150 were civilians. Because all the fighting is done by machines and highly-motivated and highly-trained special forces (we think), American politicians can, if they so choose, wage there a forever war without the check of a population that, tired of being sent around the world to get killed, can vote otherwise. We, of course, have other things on the brain, like making enough money to eat.

Black Ops 2 made more than 500 million dollars within the first 24 hours of its release. This makes it, according to the metric of Activision’s boasting, the most successful entertainment ever created.

Since we are all very much in agreement about the cultural and economic significance of video games, we no longer have available to us the argument that “it is just a game.”

The first scene in Black Ops 2 shows a woman burning alive. You see her skin peeling off and you can almost smell it.

The first thing you see in Black Ops 2, once you gain control of the perspective, is a man burning alive inside a box.

Later in the same level, you find an abducted CIA agent in a shipping container turned into a charnel, in which mangled bodies ooze like so much motivation. You discover that the kidnapped agent had been trapped around the gore in the little box for days, which is a useful way of thinking about the experience of playing this game.

Later, in a glib flourish of the “moral equivalence” for which this series has become known, you get a chance to witness the torture of the torturer.

The last thing you see in the game, if you are not thorough enough in your playing, is a man pouring gasoline over his body and lighting himself on fire.

There is a lot of torture in Black Ops 2. Hands are stabbed, faces are slashed, knees are shot. Children are menaced. A woman in a very short dress gets shot in the head from point-blank range.

The game, about halfway through, remembers the irony that protects it from serious examination, and introduces things like robotic flying squirrel wings and a plot to use a microchip for evil. The first part of the game, where most, but not all, of the Blood Meridian-level violence occurs, feels like a weird and terrible dream.

The game is always “pulling the rug” out from under you, by moving back and forth in time, by moving all over the world, by having you play as the bad guy, or having you accidentally shoot someone you love, or making you protect Manuel Noriega, or having you play someone who gets killed at the end of the level. The purpose and effectiveness of these POV shifts has been endlessly debated. I think they serve quite a basic purpose, which is to disorient the thinking player out of inferring anything about Treyarch’s politics. Of course, Treyarch has no politics; their mission is to profitably entertain and so they have to create games of sufficiently ambiguous/inoffensive (confused) politics that they can continue to make profitable entertainments. The player should not be made to feel bad about herself for playing the game and so the patina of moral seriousness must be applied.

As it stands, the only person who could be alienated enough by Black Ops 2 to stop buying the Call of Duty games is someone who doesn’t like violence, which appears to be not a lot of someones.

I think that the average American citizen has abdicated basic moral thinking about warfare and the death of non-Americans and poor Americans, a trend that I predict will grow in actual magnitude and lessen in perceived significance.

The Army Experience Center, a $12 million dollar gaming setup in a Philadelphia mall, was open from 2008 to 2010 and let visitors engage in simulated missions with to-scale rifles.

In Ender’s Game, the classic work of young-adult science fiction, a boy discovers the intense warfare training simulation at which he has excelled is in fact real life and he has unwittingly committed atrocities.

In the cacophonous final act of Black Ops 2, a supervillain turns our army of near-future drones against us. I suppose this is a message about overreliance on automated killing. As you may have read, Treyarch consulted the military futurist Peter Singer to make their tech and narrative as plausible as they could, according to their notions of plausibility.

Singer once told me a great, possibly apocryphal, story when I was a fact-checker at Popular Science. Apparently, a delegation of important folks came to see a demonstration of a ground-based machine-gun drone. The drone malfunctioned and spun around to point its barrels right at the crowd, who understandably lost their shit. No one was harmed.

In the penultimate level of the game, as you fight off the evil drone army, the game hands you some good drones to work with. The good ones have a green light and the bad ones have a red light. The message seems to be: don’t lose control of the drones.

I think it is time to embrace the idea that we have deep appetites for real-life organized bloodshed and no appetite for risk. Treyarch certainly has. I think there are two possibilities for this phenomenon. The one that I fear is that we are actually bloodthirsty and risk-averse. The other is that we feel very, very guilty.

Either way, these feelings will go unexamined. This isn’t the fault of Treyarch, or the military-industrial complex, or Osama bin Laden. It is our fault that we amuse ourselves the way we do, and I think we will get what we deserve: more Call of Duty.

So, Treyarch, Infinity Ward, Activision: we have already sent drones to do our dirty work. We have sent ourselves. There is a soldier in all of us!