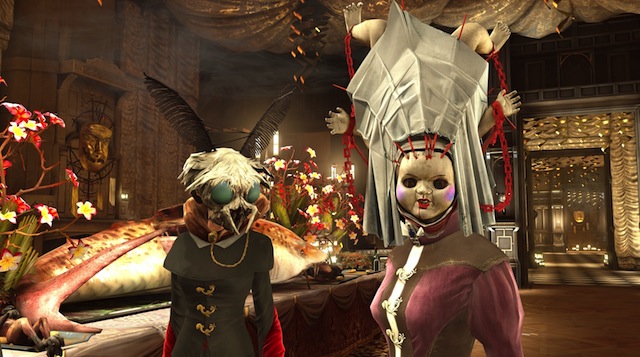 Time was, the only special ability a video game character needed was the ability to jump. Corvo Attano can swing a sword, shoot pistols, wield a crossbow, throw grenades, set traps, reprogram defense systems, teleport, slow time, summon magical gusts of wind, see through walls, possess the bodies of dogs, turn corpses into piles of ash, and conjure a swarm of rats out of thin air.

Dishonored is the latest and worst example of the “Swiss Armification” of video games. This design theory holds that the more awesome shit you give a player to do, the more fun they will have. Take all your ideas. Throw them in. Don’t make players specialize; don’t make players wait or work to unlock the best. Just design an open world and let them loose.

In practice, this is about as exciting as the punch bowl at a Romney family wedding. The vast arsenal of outlandish abilities makes each feel mundane individually. The hero is so powerful that the enemies in his way become annoyances, not challenges.

Defenders of Swiss Armification will no doubt invoke the totemic pleasures of “player choice.” Everyone likes choice, until you’re perched on a ledge, trying to choose whether to kill a guard by teleporting 20 feet and slitting his throat in mid-air, or by summoning a throng of rodents to devour his still-living corpse. Who cares?

This system might have more heft if it was supported by even a shred of context. Instead, the player is simply set loose in Dunwall, a preposterous, plague-ridden steampunk confection that mixes Victorian Britain with mid-20th-century fascism and adds whale oil. Dialogue is mostly limited to “go here, kill him.” Players are expected to flesh out the world for themselves by reading reams of discoverable literature, which is hackneyed when not boring and vice versa.

Credit to the art directors at Arkane Studios, who create a magnificent, grimy dystopia that looks as if it’s been painted in gouache. Research on location in London and Edinburgh results in tortured, old-world architecture in the grips of an imaginary Industrial Revolution. The game’s visual Britishness is everywhere; according to Eurogamer, the developers had an in-house anatomy expert “to ensure that the morphology of the game’s faces” was a faithful representation of Albion the Fair. The main quest hub is a pub: “The Hound Pits.”

This effect is instantly torpedoed by the game’s first line of dialogue; characters in Dishonored speak with American accents. The mistake is compounded by the criminal misuse of a spectacular voice cast. This is a game that manages to make Susan Sarandon, Michael Madsen, Lena Heady, John Slattery, Carrie Fisher, and Brad Dourif sound boring and forgettable.

No one pronounces the main character’s name – Corvo – with any conviction; Slattery sounds like he’s ordering an unfamiliar Italian red. Billy Lush is half-asleep as “The Outsider,” Corvo’s severely undercharacterized supernatural sidekick. Worst of all is the decision to cast Brad Dourif as Pierro Joplin, the obligatory “buy more bullets” shopkeeper. By the eighth time you hear an actor of Dourif’s quality say the equivalent of “what can I do for you, Corvo,” you’ll want to throw the game disc out the window.

No one pronounces the main character’s name – Corvo – with any conviction; Slattery sounds like he’s ordering an unfamiliar Italian red.

Joplin is the designer of Dishonored’s distinctive mechanical skull mask, an object which neatly sums up the game’s essential flaw. When he first hands it over, Joplin explains that that because Corvo is a wanted criminal, he needs to wear a mask so that the citizens of Dunwall can’t recognize him.

Of course, Corvo could wear a bandana. Or grow a beard. Instead, he must don a supremely uncomfortable-looking metal mask. And, as it turns out, there are no citizens! Only anonymous guards, thugs, and assassins that Corvo spends his time a. hiding from and b. murdering (or, c. putting in sleeper holds).

So why does he wear the mask? Because it looks awesome on the front of the box. Everything in the game, from the overstuffed ability wheel to the wasted voice cast to the telegraphed twist to the cliched final climb up a tower feels like another ingredient haphazardly tossed into the roiling stew of “this will be awesome!” with no thought to whether the tastes will complement one another. Dishonored has “Weepers,” barely explained plague victims that act like zombies. Zombies are awesome still, right? Can we make Corvo possess fish? Awesome! How about, when he slows down time, he attaches booby traps to people! More decapitations? Why not? What if, when Corvo…