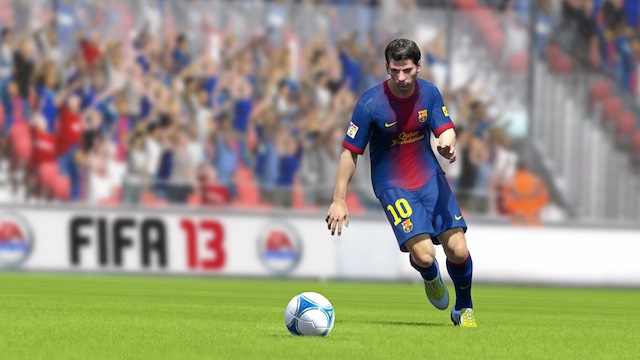 I’m a journalist: I can always make time. My roommate, Mike, is in business school. Like, a good business school. He needs to be actual places, a lot. Yet he consistently, and heroically, avoids being in these actual places so he can play FIFA. And his reward for doing this is that he gets to put up with me.

And I am a trash talker.

I have tarred his play-style as business-school-style. It is highly efficient, based on his core competencies, and ultimately wants for imagination. It is jogo feio. Between me and you, Mike does what many good FIFA players do: they find a reliable tactic to get the ball in front of the box and they do it again, and again, and again.

Sure, that will win you some games. It will also get you called the Mitt Romney of FIFA by your roommate.

My style is fluid, spectacular. It has leitmotivs and variations and emotions. It has irony. I have scored goals so sublime that I wanted to cry, hit through-balls so delightful that I wanted to laugh.

We were excited for the new FIFA, Mike and me. Him, to relax, take his mind off of Zones of Possible Agreement and case interviews; me, to continue the world-historical dialectic between our styles, to see whether EA had moved towards the improvisational or the programmatic, towards bonito or feio, towards me or Mike.

After a week of play, I’m chagrined to report that I have no idea. The reason I have no idea is because I’ve been having so much fun playing FIFA Soccer 13 I have totally forgotten how much I hate the way Mike plays.

I’m sure people with doctorates in the field of videogame ball physics (pelotagy?) have already explained in stultifying detail just how much better the ball physics are in this new iteration. These people are correct. The ball, for the first time in a FIFA game, does unexpected things. You can’t guess or overplay nearly as much in this year’s game, because you don’t know where the ball is going to bounce.

The apparent randomness, or rather, fidelity of the ball, call it the ballness of ’13, is the synthesis of bonito and feio that we have been waiting for. The unexpected ways that the ball moves means Mike can’t sit on the wing-to-center passes on which his robotic victories are built. It also means I can’t hit my gorgeous through balls with the same composer’s confidence; they simply won’t always get there. Ballness forces us play loose, in an athletic stance (of sorts, of course, our asses very much are planted on Ikea), to make it up as we go along. It feels, very much and for the first time, like we are playing the same game.

Yes, certain players will always pick perfect passes (Iniesta) and others will always gather them perfectly, on the first touch (Messi). But you know what? This is a much, much better proxy for soccer skill than pure speed, which was the crutch on which the designers leaned in past years to differentiate the stars from the plebes. Isn’t this what actually happens, in a soccer match? Certain players can reliably play the ball, in all of its ineffable ballness, and others can’t.

So, yep, we’ve been playing the game in high rapture for the past few days. We started talking about hypothetical conditions we would put up with to ensure we could continue to play FIFA 13. Mike ventured that he would agree to have to smell the smell of low-grade halitosis, everywhere, for a month, as long as he could keep playing FIFA. I said I would punch my sister, whom I love and adore, in the stomach, twice, to make sure I could keep playing.

See you in a year.