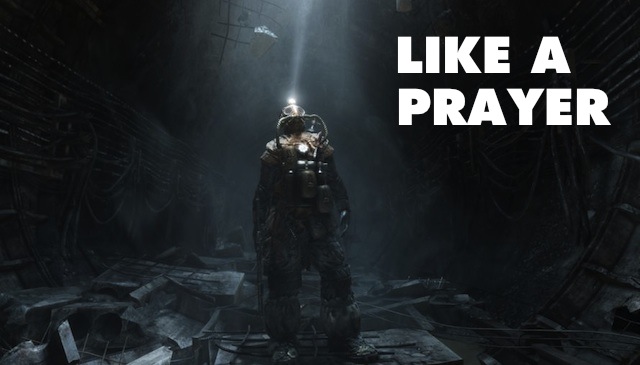 When playing Metro: Last Light, you should do so in the game’s native Russian, with the English subtitles on, the way you’d watch a foreign film. For one, the Slavic voice-acting is superb, far better than the stereotypically thick and clumsy immigrant accents of the English actors, which reminds me of Nikolai Valuev with a concussion. And while the gritty, wartime libretto is quite passable as far as fallout memoirs go, it’s a huge relief to be able to tune out the barracks chatter.

In Russian, profanity is painlessly beautiful.

If you’ve played as many stealthy shooters as I have, you never again need to hear the predictable last words of two unwitting sentry: –Did you hear something? –Nah, probably nothin.’  Then, there’s simply the matter of manners. While I find being cussed at in my native language to be extremely grating–especially coming from a sleazy, polygonal character sketch of Ratko Mladic–in Russian, profanity is painlessly beautiful, like getting a postcard from Siberia.

But those are just perks. The best reason to play Last Light in Russian is to turn up the gas. If you ask anyone familiar with Metro 2033 (the first game in the series), or if you’ve heard anything about its sequel prior to release, you know about the atmosphere. It should be written on the back of the box. The most notable characteristic is a thick and succulent vibe–an opaque smoke screen that causes you to fear the unseen. Of course, Russian soldiers barking at you in harsh, guttural voices doesn’t hurt the cause.

Atmosphere might be the most difficult and valuable thing for a shooter to achieve. And though the term has become the lazy publicist’s bullet-point, it’s hard to pin down exactly what it is. Middle Ages astronomers were the first to describe the orbs of vaporous air that seemed to seep out from the planets. But, when it comes to games, the way we think of it is closer to how people once thought about the moon–it’s this glowing object with a hypnotic pull that can bring an ordinarily sound mind under its dominion. In Last Light’s case, it’s less of a visual effect than a menacing tone.

Ambience is too nice of a word for what it’s got.

That’s not to say the stardust is unnecessary. The games that cast the best spells inevitably owe a great deal to their hazy scenery, and Last Light is no exception. Red Dead Redemption is inseparable from its ochre and melon sunsets. I will always remember Deus Ex: Human Revolution as a whirl of smog and neon. And Last Light’s air is contaminated with nuclear dust. Ambience is too nice of a word for what it’s got. It sounds light, dainty, undemanding. We need something intimidating and reminiscent of the Iron Curtain. Perhaps ?????????.

The uninhabitable world as envisioned by the Russian sci-fi author Dmitry Glukhovsky revolves around a splintered society of largely male survivors who live underground in the subway system–a network of crumbling vestibules stockpiled with plenty of guns but little ammunition. His inspiration was partly based in reality. Moscow’s metro, which Glukhovsky rode often growing up, was once used as a bomb shelter during German air-raids. 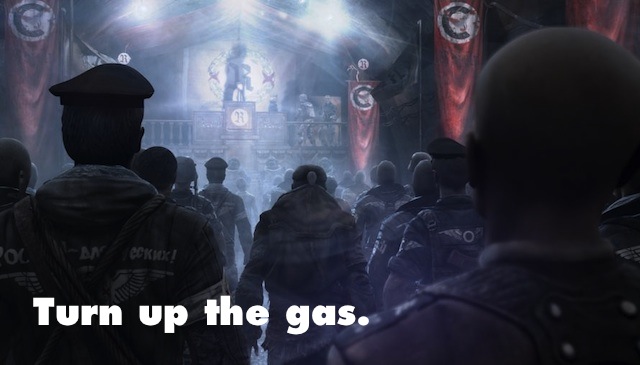 As for the rest of the story, not so much. Glukhovsky is lucky a little dry ice goes a long way. As Tom Bissell aptly put, “If the atmosphere’s good, who gives a shit what the story is? The player’s already there.” Last Light is living proof. The moody overtone is laid on so thickly that you will barely notice the writing’s incredible lack of restraint. Otherwise, it would be a breeze for me to bad-mouth the sensationalized story arc, which introduces our mum protagonist not only to radioactive river rats, but also to the Commies, the gas chambers, and Adolph Hitler reincarnate. Talk about your bad breaks! Yet it never becomes an issue.

Therein lies the innate magic of nervous tension mixed with a bit of fog. It has an almost mystical quality that elevates you from a perfectly valid position of being cynical, and places you in a state of mind where nonsense like defending a gondolier from mutant trout is suddenly very important and suspenseful. There’s little you can do to resist it, and why would you want to?

It has an almost mystical quality that elevates you from a perfectly valid position of being cynical.

Maybe because Last Light is so brilliant when everything’s clicking, or maybe because it’s remarkably bad at breaking the flow when it’s not, the enchantment comes and goes. For the record, nothing kills the mood faster than getting stuck. On consoles the game has the bad habit of incessantly auto-saving, which can trap you without enough air or ammo, with the only fix being to restart. Equally frustrating is how the compass sometimes just doesn’t work.

It just goes to show how atmosphere is something more than dim lights and cigarette smoke. Surely the smooth flavor is enhanced by the plucks of Ukrainian folk guitar, the reverb of combat boots splashing down a tunnel, and brusque, sandpapery voices choking on words you can’t understand. But above all that, it’s a powerful sensation of being attuned with play. When Last Light has it, it’s unsurpassed. And when it’s tripping over itself, well, I suggest you take heart in the words of Lenin by way of Mikhail Gorbachev: This revolutionary chaos may yet crystallize into new forms of life.