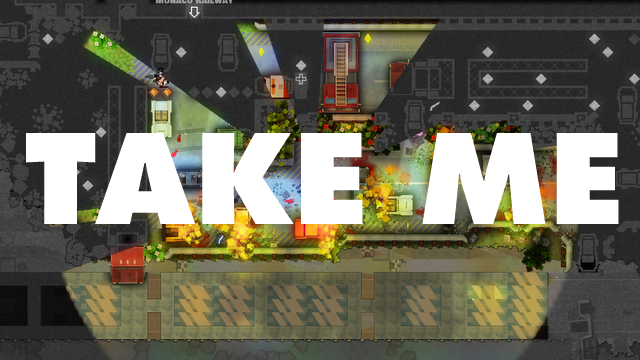 A few months ago, I had the good luck of catching the retrospective on Garry Winogrand, the 20th century street photographer who’s preceded by his mystique as an overanxious vagabond, a pack rat of the still image who wandered American cities with a Leica M4 pressed to his eye, snapping everything that moved.

As can be seen in any of his famous shots––a group of flirtatious young women in sundresses sitting on a park bench, an elephant trunk reaching across a cobblestone wall to an outstretched hand––his photography is characterized by stark lighting, always shadowy, and always in black-and-white. The critic Lyle Rexer calls his technique “pushing it,” explaining how he underexposed the film in the camera and overdeveloped it in the darkroom to achieve his signature style.

Which brings me to Monaco. Although it’s brought to life with a completely different medium, touches on dissimilar subject matter, and is from another era, the arcade-stealth title by Pocketwatch Games has familiar poise. Monaco is high contrast. This is obvious from the very start. It’s evident at the character select screen, as the deformed silhouettes of the crooks and con men brutishly animate against a ribbon of saturated neon––crude pixels shapeshifting in homo sapiens likeness.

You can see what’s directly in front of your little criminals’ faces, and that’s about it.

And on into the game proper, it can be seen in the thick as molasses darkness. You can see what’s directly in front of your little criminals’ faces, and that’s about it. The contours of your line of vision bend around the corner, break through an open door, and then seep harmlessly into the black murky layout. That is to say, the contrast pops.

The effect visually is that Monaco is striking to look at: abstract, complex, bold, fragmented. It’s unclear if this was intentional, but I’ll take the result. Andy Schatz, Monaco’s designer, told me that the intense style serves a practical purpose, to make the game readable. Between the luminous red laser tripwires, the dimwitted guards roaming the corridors (who mumble to themselves in adorable ersatz French), the security and power systems that grid the crime scene in electric green scan lines, the ringing telephones, etc., etc., there’s a lot to take in and process.

What the game shows you, front and center, amounts to a stylized blueprint of the Monte Carlo or a swanky nightclub or Rainier III’s palace, unrolled across the screen and viewed from the top. Lights off, of course. I’ll give you that it looks confusing and kind of bland in a still shot, or even on YouTube, but with a controller in hand and the brightness optimally pitched, trust me, it’s radiant.

This has been a long time spent talking about graphics for a title that is bound to be admired, and rightfully so, for its do-as-thou-wilt gameplay, a virtual hall of mirrors that brilliantly refracts in an endless variation of heist jobs. Whatever your vantage, you’re sure to find labyrinth after labyrinth of alcoves strewn with jewels, catwalks that conveniently allude night watch, a house cat whose awry mew turns a tranquil toilettes hommes into a haphazard scene for a caper chase. This will probably end with you desperately scrambling to a starlit alley in an escape worthy of Houdini. It unravels in a hot-wired getaway.

The best strategy is always to run away from whatever hornet’s nest you’ve kicked.

But because the best strategy is always to run away from whatever hornet’s nest you’ve kicked, and then to keep hoofing it until the danger dissipates, still out there somewhere, still on the screen, but invisibly hidden from your glowing halo in the distant grayscale, it’s hard to not talk about the high contrast as a stylistic choice. It’s what makes this puppy tick.

After a while, though, maybe because my eyes were getting tired, maybe from my imagination wandering, or maybe because I was going into museum mode, I started to pick up on the strange abstraction of the striking images in the colorless photos. The men crammed in an elevator and leering back at the camera were actually an impenetrable mass of weathered ragged boulders; an eye socket, a side profile, a furrowed brow at best. The photographs I enjoyed most seemed to cut both ways. I could gaze at them in curiosity as my mind flipped back and forth between the literal and the abstract.

One moment, I’ll be inside the cautious headspace of a cat burglar: make some racket to lure the sentry away from his post, hide in the potted plant, sneak behind him into the back office, disable the alarm.

And that’s what I find so refreshing about Monaco. It does something similar, except with play. One moment, I’ll be inside the cautious headspace of a cat burglar: make some racket to lure the sentry away from his post, hide in the potted plant, sneak behind him into the back office, disable the alarm. The next, I’ll have all the subtlety and sophistication of a Ms. Pac-Man: gobble up coins, grab the ammo, get to the life refill, run like hell from the cops, take the side tunnel, grab the jewelry, get out. It’s now you see it, now you don’t.

This changeover, from very literally playing the part of a guy who could star in a Soderbergh action flick, to the tangible abstraction of jamming on an arcade stick, happens fluidly, it happens without warning, and it happens all the time. It feels alive and, quite honestly, fantastic, like I could never ever grow bored here.

And it all somehow flows outward from the visual contrast, from the bloom of light that surrounds you, and, beyond that, the darkened gray boxes, the cubes with handprints, the scattered diamond-shaped symbols, clipart of a computer, dotted lines, an arrow pointing to a trophy, flipping back and forth.